Who cares! What is this, a Dallas Stars blog!?
Oh fine, we'll go back and take a gander at the season that was for the 2nd overall pick that was. Following up a 67 point sophomore season that saw him lead the team in scoring as a 20 year old, expectations were lofty as he entered the final year of his entry level deal, already signed to a whopping 6-year 5.75 million dollar re-up set to start in the 2013-14 season.
Unfortunately, misplaced expectations of exponential growth were not met. Nor was a reprise of his breakout campaign. His overall production, projected for 82 games, fell by approximately 12 points. Despite being harangued for not putting the puck in the back of the net enough, his goal output did only fall off by 2 from last year, though his assists dropped more markedly from 38 to 27 (projected), accounting for the overall point decline. Given the fairly modest decline in even strength P/60, nearly half of this drop came from PP output which fell teamwide by a 13 goal pace, moving to outright bad from 2011/12's mere mediocrity. Horton and Lucic underwent comparable declines, also in part attributable to mutual man advantage failure.
Outside of scoring, Seguin was by most accounts a very effective top six forward. He lead the team in CorsiRel while facing difficult competition - well below Kelly's tough assignments but, as you would expect from riding shotgun with Bergeron, right near the top tier. Among regular forwards, he saw the second fewest goals against/60 and third lowest shots against/60. Pair that with his highest-on-squad shots-for and goals-for On/60, and you get the best-on-team Corsi and +/-On (and Rel) - and not all scoring-driven either.
All that said, sharing the ice with two of the team's other top forwards resulted in high QoT that undoubtedly has influence on his performance. Separating ES performance from his teammates is a bit tricky in this instance, as Marchand and Bergeron spent an insignificant amount of time away from Seguin aside from the PK. In Seguin's scarcely 4 games worth of time with Lucic and Krejci, their tiny sample lines up with the prior year's more substantive depiction of the youngster having a massively positive impact on their scoring and a slight uptick in CorsiFor events when together. Pity we'll never get to see this borne out over a full season, as expected with Horton's departure. Past outcomes looked extremely promising.
Taken on it's own, his regular season is worthy of a B-. His drop in production isn't good, but it's not horrendous especially given the teamwide powerplay woes and his otherwise solid two way play. Yes, I said two-way.

Maligned in all corners of the media for his lack of offense and tossed down to the third line for his non-performance, even locked in his hotel to think about his poor life choices, Tyler Seguin only delivered 1 goal and 7 assists in his 22 post-season games. The guy from whom he was acquired out scored and almost out produced him entirely in a scant 7 games. Thank you, Kessel? To say that this output wasn't cutting it is quite the understatement.

I reiterate: ONE FLIPPIN GOAL!!!? Then what the hell was he doing when he was on the ice!? For one thing, he was shooting an insane amount - hence a woeful 1.4% shooting percentage. He came in second on team in total shots, trailing Bergeron by a single shot despite lower TOI, and at ES saw third-on-team in CorsiFor events while on ice. Reviewing any game outside of the end of the Rangers and beginning of the Penguins series - where Seguin does get completely shut down - will reveal plenty of near misses within that shot and shot-event count, with ample posts and narrow saves. It's not as if the guy checked out and sulked his way to a one goal tally, he was hustling and firing with impunity. Puck luck is a harsh mistress.

Before overreacting to the grim single digits in the goal and sh% columns and attributing some concoction of poor effort and intangible character flaw to his entire career, consider for a moment the probabilistic view of a 1.4% shooting rate for a guy who gets 3 shots a game and normally converts at ten times the rate. It'a well within the realm of the plausible, as we found out, but just how unlikely was Seguin's run of shooting luck? Well, let's say EXTREMELY: based on his career 10.5% shooting rate and roughly 3 shots/game average, Tyler Seguin should land in the 6-9 goal range over 22 games. In a simulation of 1000 such 22 game segments, he hit 6 goals 173 times - the above referenced range coming up nearly 60% of the time. In the same sim he hit 1 goal... 4 times. So in 1000 long playoff runs, this would only happen three other times over a hypothetical immortal, Cheliosian career. (The binomial distribution by the way results in a 0.5% chance of this happening, for you stat sticklers out there, though the randomized sim delivered 1 less occurrence). Even where he to regress to a lower true career percentage, the outcome would be comparable. 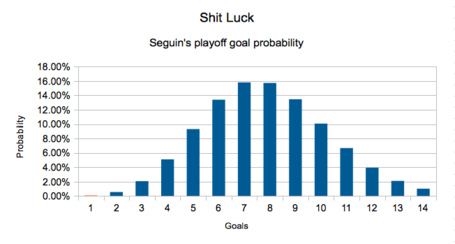 (That teensy orange bar on the far left. The less than 1% likely one. That's what actually happened.)

Meanwhile, Brad Marchand's unsustainable regular season shooting rate of 19.8%, merely a spate of luck on the opposite end of the distribution curve, had a 5% chance of occurring based on his numbers. And lo and behold he only clicked at 7% in the post season. Seguin's bad luck is 10 times less likely to occur than Marchand's good. And alas, it did. Had he kept firing over more games, well... ain't sample sizes a bitch?

Addendum on shooting (shot location data wasn't available at the time of the original posting):

Further to Seguin’s shooting, he actually fired from closer in the post-season (average 29.9ft) than the regular season (32.9ft) and took a higher percentage of his shots from the so-called home plate, in the slot between the dots, that constitutes the real-time recording definition of a scoring chance (58% playoffs, 32% season).

Generating this many shots – 2nd on team total with 6th highest ice time – and this percentage from such locations is a skill and is a positive indicator of offensive performance. And further highlights the role of luck in this case study. I’d normally not address shot quality in player evaluations as it correlates so highly with Corsi-for that it becomes largely irrelevant over large samples, but since we’re looking at a small one and trying to gauge how a poor outcome was arrived at, it’s worth noting as a counter-indicator.

Moving on from scoring or lack thereof (and attempting to scrub the memory from my brain), Seguin remained useful in other capacities, falling below only the reconstituted Bergeron line in keeping the puck going the right way. Furthermore, as you can see from the chart below depicting zone entires and shots generated from those entries, Seguin was second best on the team at gaining and maintaining the zone behind only the uber-dominance of David Krejci. 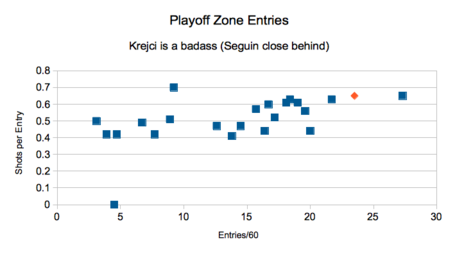 (Entry data brought to you by Shutdown Line. Probably should have removed lonely ol' Redden from the dataset...)

Krejci sits in the far upper right, Seguin the orange diamond. Outside of Krejci's badassery, nobody gained the zone more and only Torey Krug's small number of entries resulted in more sustained zone time. We lack this data for the regular season (SCoC's working on recording it this summer!) but I would anticipate a similar trend there as well.

So all to say he wasn't totally coasting in spite of godawful production. On the other hand, Seguin's strong possession should be considered against the backdrop of the shift in his usage. While he saw his TOI drop by a minute and a half at 5v5, he also moved to the lowest QoC and slightly greater sheltering in the offensive zone. The latter of which would have no impact on his entries but does color his Corsi results. He wasn't hidden from defensive responsibility to the extent Horton was, but he did move to an easier situation. Overall the advantageous deployment should have offset the ice time reduction and it seems to have yielded modest results. He began producing (assists of course) as soon as he was demoted in game 7 against Toronto (what better time to start than a game 7 OT?) and maintained half-point per game production for the duration of his time on the third line. Still not remotely good enough, but better than the nothing he generated with Bergeron. Julien's choice to move Seguin down came with some strategic advantage, juicing some production out of the moribund third line, particularly alongside Paille's Chicago-series promotion. Seguin basically swapped High QoT+High QoC for Low QoT+Low QoC and got modestly better offensive and debatably improved possession outcomes. It did however appreciably depress his shots per game, further exacerbating his goal scoring woes.

Taken solely on the quarter-season-sized sample of the playoffs, I'd rate this a big D. He's saved from an outright F by virtue of zone control dominance and some slight leeway for shit luck. Summer school mandatory.

Offensively, taking both the playoffs and season together Seguin's 82 game projection landed at only 46 points, which is simply not good enough for his ability and ice time. While there are mitigating factors including a wretched team-wide powerplay and an absurd outlying dry spell, it's impossible to let off the hook production that would have only come in third on the 09/10 squad, and bottom of the top six in most years. In spite of scoreboard results however, Seguin was far from a passenger, emerging as a team leading play driver. Even when not scoring his value was considerable, but his role on the team demands production, particularly given the flash of brilliance seen the prior year. So: