Share All sharing options for: The Global Hockey Cup: a hockey "Champions League"

Every four years, a global hockey power is crowned at the Winter Olympics. A nation earns its place as the world's best hockey country, with Swedes or Finns or Americans holding bragging rights over their fellow puck fans until the next Olympiad.

Something similar is done with "the beautiful game," albeit on a more global scale (the World Cup). However, soccer has something hockey doesn't: a way to determine the best club team in the world, regardless of country. (Soccer actually has more than one way of doing so, with both the Club World Cup and the hugely popular UEFA Champions League).

Ignoring for a second the fact that many hockey fans regard soccer with a disdain that needs to be read to be believed, this is something that soccer does right. It gives leagues, whether they're in Europe, Asia, Africa, or elsewhere, a way to measure themselves against other leagues in other countries.

Hockey actually tried something like this in the past. The IIHF European Champions Cup existed in various iterations over the past few decades, with the most recent tournament crowning ZSC Lions of Switzerland the champions of Europe after defeating Mettallurg Magnitogorsk in 2009. The tournament eventually folded, presumably due to lack or funding, lack of interest, or behind-the-scenes workings by the IIHF. A challenge of sorts between Europe and the NHL has happened before as well, but was subsequently cancelled.

In the interest of summer speculation, why not imagine an international hockey "Champions League," where the world's best hockey clubs would compete in a two-week tournament for international supremacy? There are numerous logistical obstacles to overcome, making the idea of a 2013 tournament absurd. However, for the sake of argument, 2013 teams will be used when discussing the idea of the tournament.

The Global Hockey Cup would be a 16-team tournament held over a two-week period, ideally from late-August to early-September. Its purpose would be to crown the world's best club hockey team. The winning team would be awarded the Victoria Cup.

The late-August to September time period is the best option. Originally, a July start had been considered. However, due to NHL free agency and other considerations, this would be a huge logistical headache: teams would be missing players, players would be looking for teams. By August, most NHL and European teams are set and preparing for the upcoming season. Also, a September tournament would be far better preparation for the actual season than the glorified scrimmages the NHL currently holds. The late-September time frame worked before in the Victoria Cup, and could certainly work again.

Hosting would be done by nations, similar to the FIFA World Cup. Giving the host responsibility to nations as a whole rather than individual cities would allow for more games being played simultaneously (thereby shortening the tournament), as well as more options in the case of scheduling conflicts. Given its hockey-mad reputation, Canada would be the ideal host for the first Global Hockey Cup.

Future hosts would be chosen by the IIHF and the Global Hockey Cup board, which would jointly oversee the tournament. Ideally, a different nation would host every year.

The Global Hockey Cup would be contested by the best club hockey teams from around the world. Unlike the Spengler Cup, it wouldn't be an invitational, and national teams wouldn't be allowed.

The consensus top-six hockey leagues in the world would receive two entrants each: the league's champion and runner-up.

The Slovak Extraliga and Germany's Deutsche Eishockey Liga, solid leagues in their own right but often a step below their European brethren, would receive one entrant each (the league's champion).

Lesser leagues from around the world would be able to enter as well by petitioning the IIHF and the Global Hockey Board. Leagues like the American Hockey League, East Coast Hockey League, Norway's GET-Liagen, and others would petition the IIHF to allow its champion to enter the tournament. The accepted teams would participate in a single-elimination play-in tournament, with the two finalists admitted into the Global Hockey Cup as low seeds (similar to the NCAA basketball tournament's play-in games).

Here is how these match-ups would shake out: 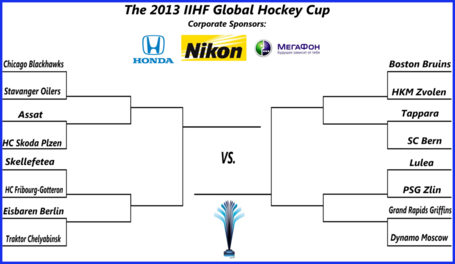 Teams from the same league would be placed on opposite sides of the bracket, making it possible for, say, an all-NHL or all-KHL final.

Teams would be seeded 1-16 by the IIHF and Global Hockey Board according to the strength of the league (see the bracket above). The first round would be a two-game, aggregate goal series. For those unfamiliar with aggregate scoring, it means that the goal totals from both games would be added up to determine the winner. (This way, each team would be guaranteed two games, meaning Stavanger didn't fly across the world to get pasted 12-0 and fly home.) Should a series be tied at the end of Game 2, continuous OT would be played to determine a winner. No shootouts allowed.

After the first round, every round would be single-elimination. Therefore, each team would play a minimum of two games, with the maximum being five. This is so teams don't have to play ten or eleven games and overextend themselves before their actual seasons begin. Like the first round, there would be no shootouts, with continuous OT until a winner is crowned.

Ah, here's the trickiest part: why bother? After all, hockey fans know the NHL is the world's best league, right? Why else would the world's best players leave home and flock to North America?

These are all valid points, and huge obstacles to overcome. The idea of a tournament like this would be more easily accepted in Europe, where sports fans are used to such international challenges. However, why would the NHL bother, and why would the NHLPA bother allowing its players to go? NHL players value their time off, looking at it as hard-earned after a long season of work.

The only way to get the world's biggest league to participate would be to appeal to two different things: players' pride and players' wallets.

Players in the NHL consider themselves the best in the world. But how would they stand up against the best from other countries? All it would take was one team from Europe winning this tournament, and it would help ensure future NHLer participation.

Money would obviously help as well, so a big-name sponsor for the tournament is key. It'd have to be a global brand, so think Coca-Cola, Honda, Toyota, etc. Players could be compensated for playing, and the winning team would receive some kind of monetary bonus. Pride alone probably wouldn't be enough, but a little greasing of the palm could probably entice most NHLers to take the leap.

Truthfully, however, the main reason is that now is the best time. Hockey is rapidly becoming even more of a global game than it was a decade ago. Nations not named the United States of America or Canada routinely win international tournaments, so it stands to reason that leagues from other nations could seriously challenge the NHL for global hockey supremacy.