More Than A Hockey Team

This is the story of how the Bruins helped me tolerate chemotherapy.

Share All sharing options for: More Than A Hockey Team

I've been doing this for four years and I still don't really know how to gingerly bring it up so I'll just come out and say it - I was diagnosed with leukemia in 2009. As a 19-year-old, my mind was fully focused on nothing but reuniting with friends at school and then, blindsided, I was ripped away from all that I was looking forward to so that I could undergo chemotherapy. Suffice it to say, I was not in a good place.

But thanks to the Boston Bruins, that drastically changed.

My treatment took place at Tufts Medical Center, specifically in the Neely Pediatric Bone Marrow/Transplant Unit, generously funded by the foundation of none other than Cam Neely. I mean, if I'm going to go through all this, it might as well be cool by association. In fact, one of the rooms was Bruins themed, complete with framed autograph jerseys, sticks and a logo in the floor tile. Cam and his siblings, as you may know, lost both parents to cancer. They now use Cam's celebrity status to help fund cancer research and support families. I can't say enough good things about them.

Thanks to Cam and the team's association with the hospital, game tickets were routinely offered to patients. As a 19-year-old being treated in a pediatric unit, I must say it was refreshing to have entertainment opportunities suited for my age level. And of course, being a massive Bruins fan, free tickets were music to my ears; particularly on two occasions...

On New Year's Eve 2009, I was scheduled to come in for a procedure that would have me staying overnight. As I was in no condition to be celebrating the New Year anyway, I wasn't concerned with missing anything, I just wanted to keep plugging away at the regiment. When I arrived, it was learned that my blood counts were not at the necessary levels to conduct the procedure, and thus I was sent home with the knowledge that my time undergoing chemotherapy had just been prolonged.

As I was getting ready to leave, one of the people in the room chased me down excitedly. It seemed she had received word about some Bruins tickets being donated but she didn't want to say anything until after my status was known. You better believe my mood did a 180 when she told me they were for the next day's game. Yup, I was going to the Winter Classic. I, along with my uncle, joined a very generous season ticket holder for the game and a great memory. I managed to keep in touch with that season ticket holder (I won't mention his name out of respect to his privacy) and he continued to offer his ticket to me when he couldn't attend games and also kept tabs on my status.

An even better memory, though, came 10/10/09 when the Bruins beat the Islanders 4-3 in a shootout. The game itself wasn't particularly special, everything else was, though. In honor of Hockey Fights Cancer being honored at that particular game, a number of patients from Tufts were offered the opportunity to watch it in a box - Patrice Bergeron's box. The luxury and specialness of the occasion was almost too much. And then I was asked if I wanted to ride the Zamboni. Having always wanted to do that anyway, I couldn't believe it. Dream come true. 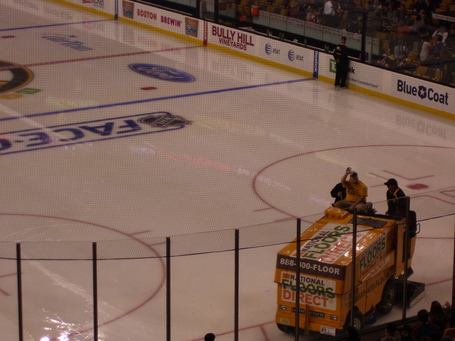 Following the game, we all met a litany of Bruins players - including Tim Thomas, who was incredibly friendly, believe it or not. Easier to believe, I'm sure, was that Patrice Bergeron was far and away the most engaged Bruin. Not only did he fund bringing everyone to the game, he stuck around to meet everyone and to thank them for attending. Whether it was signing pucks, taking photos or chatting, he had time for everyone. Bergeron is my favorite player but his Selke is only part of why.

And in the future, I attended more games and sometimes players visited me in the hospital. One such time made it on the Bruins website (skip to 2:42 to see me and my swollen head talking with Byron Bitz):

It was pretty cool to have the players come visit me in the hospital. It was even better in 2011 when they brought Lord Stanley with them. And yes, I did touch the Cup, although, hug would be more appropriate.

In November, I concluded my chemotherapy after three and 1/3 years. Of course, the biggest reason for that is the wonderful oncology team that treated me. But I owe a secondary thanks to the Boston Bruins who time and time again made the process tolerable by giving me something to look forward to every day. It seems simple, but it's really easy to get gloomy in these kinds of situations so whatever can boost morale is huge. For me, it was the Boston Bruins.