Pouring one out for the Boston Cubs.

Share All sharing options for: OTBH: Pouring One Out

While OTBH generally regales its captive audience with stories of Bruins teams/players past, it does also occasionally meander into non-Bruins hockey history -- after all, this is Olde Tymey *Boston* History. So today we are pouring one out for the dearly departed, we-hardly-knew-ye, Boston Cubs.

Wait, you know about the Boston Cubs, right? That erstwhile Boston-based Canadian-American Hockey League (CAHL) Team? No? Well, in cased you missed one of OTBH's very much in passing mentions of the Cubs, allow me to introduce you to the best here-and-gone Boston hockey team of all time.

The Boston Cubs were part of the CAHL under various names from the 1926-27 season through 1935-36. Formerly known as the Boston Tigers (4 seasons), for a total of 10 glorious years the Cubs provided Boston area fans with another professional hockey option in addition to the Bruins. Serving as a farm team of sorts (and owned/operated by the same group as the Bruins (i.e. Charles Adams and Art Ross)), the Cubs and Bruins transacted with each other frequently, sending players between the two clubs for rehab stints (looking at you, Flash Hollett!) or to make roster space. But while the Bruins were obviously the big hockey attraction in Beantown, the Cubs garnered their fair share of attention during their all too brief stint in the hub, often drawing crowds of 5,000 or more.

Their popularity can be attributed at least partially to their success: in the 10 seasons they played in the CAHL, the Cubs(/Tigers) won the Can-Am championship three times -- 1929, 1933, and 1935. They made it to the final 4 other times, for a total of 7 trips to the final. Out of 10 seasons. That is, as they say, not bad, even in a league with relatively few teams. If the Globe is to be believed, the team's winning ways created a culture of excitement around the team: one 1931 matchup against the Providence Reds was described thusly: "In a knockdown, drag ‘em out game of hockey, the Bruins Cubs last night defeated the Providence Reds for their second victory in three nights and thereby thrilled to hysterics the throng of some 5000." The following month, attendance at a regular season game topped 13,000 at Boston Garden, demonstrating the serious drawing power of the Cubs. 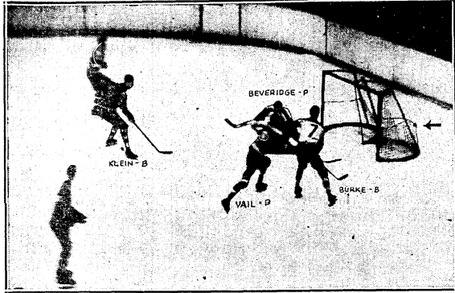 The Cubs at the Garden.

It wasn't only their regular and playoff successes that drew fans in, however: the Boston Cubs had sass. Among the memorable players that suited up for them over the years are included Lionel Hitchman, Bobby Bauer, Flash Hollett, Dit Clapper, and Woody Dumart -- a bunch of interesting characters if ever there was one. The Cubs were also known for having game nights geared towards particular groups, including the first ever Ladies' Night in professional hockey in Boston.

Another feature of the Cubs' play was a certain -- let's call it pugnacity -- that captured the hearts of Boston fans. The stories of epic Can-Am brawls are legion, and the Cubs feature prominently in quite a number of them. In one such game, on January 1 1932, the rambunctious nature of the matchup led the Globe to publish its game story under the headline "Bruin Cubs Win Wild Game From Providence Reds--Fights, Penalties and Several Injuries." The story went on to describe the game, which might accurately be termed a ‘shit-show', in detail:

In the most starkly primitive game of hockey which the Boston Garden has seen this year, the Boston Cubs last night defeated the Providence Reds, 8 to 4 . . . the contest was witnessed by more than 14,000 persons, there being standees for the first time in the annals of the Can-Am League, and they all enjoyed the battle, at time approaching dangerous proportions in its sanguineness. A total of 19 penalties, among them a major against Yank Boyd and fines of $25 on [Providence Manager] Newsy Lalonde and $10 on [Providence goalie] Bill Beveridge.

Two points, here: first, sounds like a rollicking good time that olde tymey hockey fans in Boston would eat up with a spoon, and second, can we please get some modern day hockey players named Yank and Newsy? Thanks.

It's clear the Boston Cubs provided a viable hockey alternative to the Bruins for the hockey-loving denizens of the city, as well as a convenient minor league affiliate for the black and gold. Alas, the magic didn't last, and before the start of the 1936-37 season, manager Art Ross officially announced that the Cubs would be shutting down operations. Apparently, despite the support of the Boston faithful, the Cubs were still a money-losing proposition. Beyond that, Ross informed reporters in September of 1936, the Cubs "weren't producing the players expected for the Bruins." So: crowd support and delightful donnybrooks notwithstanding, the Cubbies were providing neither the monetary incentive nor the player development necessary to justify the cost.

The Bruins kept two of the Cubs -- Peggy O'Neil and Joe Jerwa -- but sent the rest of the team packing, and thus closed the door for the time being on minor-pro hockey in the hub. It was a good run, though, and made for a lot of wacky games for Boston-area fans -- not to mention provided a launching pad/rehab locale for more than one future Bruins HOF-er.

So RIP, Boston Cubs: you weren't around all that long, but you were, in fact, a wicked good time.