The desert franchise that couldn't. The Your-City-Here Coyotes even suck at relocation.

Share All sharing options for: 29 Teams We Hate: Phoenix Coyotes

Lets open on the franchise's pitiful lone highlight. Locked in a hard fought battle with eventual champs the Los Angeles Kings in the Coyotes first and only appearance in the Conference Final, Dustin Brown's leg clips Michal Rosival's late in OT, sparking a center ice scuffle. A minute later, Phoenix's playoff push is over on the stick of Dustin Penner (somewhat pathetic in it's own right).

The Coyotes reaction? To rush the officials and complain about a hit that had zero impact on the final outcome of the game. And when even that dawns on the enraged players as too much of a stretch, they out-Buffalo the Sabres in bitching about a hand pass on the game-winning play. Certainly, the NHL would call back a series winning goal on a technicality, were it not for the vast conspiracy against the Coyotes. Right Keith Yandle?:

"It’s unfortunate, for us especially. They know we don’t have an owner. We don’t have anyone to back us up. For them, I don’t know if it’s an easy way to not make calls, not show up.

"I know they wear the same color jerseys, the refs as the Kings, but they didn’t have to play for them tonight."

Maybe you should look in the mirror, Keith. Diving for calls tends to backfire over the long haul.

Mind you, this wasn't a game seven with passions running hot. This was 4-1, the Coyotes were never once in it. But cheapshot artist honorable Captain Shane Doan made sure the officiating crew and everyone in the handshake line knew of his displeasure over the hit that cost them the game in his mind! The series! Even the cup!

For a team that's been having it's bills paid by the league for over half a decade, that's some entitlement complex. And also a bit daffy to think that the NHL would rather side against them in rigged officiating rather than extend their season for a little ROI. Along with the league, the Glendale city council has been hemorrhaging money, forcing cessation of vital services to their community just to keep the rotting corpse of a hockey team in their desert suburb. Even in their most successful seasons in franchise history attendance has been at rock bottom, no higher than third worst since the 06-07 season - typically jockeying with the Islanders for the basement. Even the ersatz Jets that filled the void in Winnipeg, possessing the smallest arena in the league, outpace the erstwhile Jets. Yet unlike the Thrashers who had the good sense to pack up the van, the NHL keeps the corporate welfare coming to feed the broadcast beast a Southwestern market. In the process, we fans get to enjoy summers full of will-he-won't-he news from the world's least effectual city council.

(To their great credit however, it should be noted that the team is draining and squandering some of Jeremy Jacobs money, so they're not all bad.)

If being a parasite on the rest of the league and subjecting fans to the dullest of soap operas weren't enough, the Coyotes also managed to tarnish the name of the second greatest player in hockey history. In a bid to save the team from relocation (reportedly to Portland, which undoubtedly would have been for the better - just think of the Portland Coyotes-Brooklyn Islanders hipster rivalry!) a prospective ownership group courted Wayne Gretzky to help keep them in Arizona. Furthermore, a few years later they abandoned all good sense and installed The Great One as head coach in 2005, in spite of his compete lack of a resume. Having never coached at any level, Gretzky's hapless Yotes continued to limp along in sub-500 mediocrity. A bankruptcy battle ended the Gretzky-Coyotes relationship, stiffing him for the remainder of his contract and souring him on the NHL for years to come. From his stint with the Coyotes, one of hockey's greatest names left with a lighter wallet and a mar on his heretofore unimpeachable statline in the form of a horrid coaching record.

(As a side note to this tale, the bankruptcy fallout briefly left Ulf Samuelsson to helm the team in the preseason. Doan had to get it from somewhere...)

And let us not forget: because this franchise couldn't hack it in way back in Winnipeg, their departure opened the door for the grotesque facsimile of the former Jets that exists today. If they'd just held on in their teensy-but-fervent market, we'd be rooting for Blake Wheeler on the Nordiques today instead.

In other crimes against humanity:

They produced a jersey so hideous, even Team Pooh is divided on it. 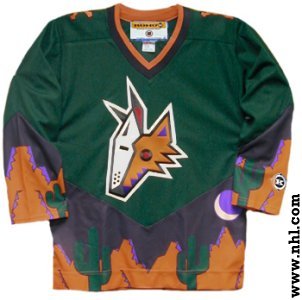 They think Derek Morris is an NHL defenseman

They'll often claim Teemu as one of theirs, though he was in Anaheim by the time the Jets hit the land of Alice Cooper.

They gave Paul Bissonnette a soapbox

They simultaneously squandered an entire decade of prime Keith Tkachuk and some of Craig Janney's back nine.

They got the weather wrong.

They have employed both Raffi Torres & Claude Lemiuex