29 Teams We Hate is a new feature we'll be running in which we break down all the reasons you should hate the league's other 29 teams. Starting with the least hatable franchise, the Nashville Predators.

Share All sharing options for: 29 Teams we Hate: Nashville Predators

Do you know how hard it is to hate the Nashville Predators? You just can't do it. This is a team so non-threatening, so borderline adorable that it almost ruins the spirit of competition when your favorite team plays against them.

In Nashville's prestigious franchise history they have won exactly two (2) playoff series. The first came in 2011 when they beat the Anaheim Ducks in six games before being steamrolled by the eventual Stanley Cup Runner-Up Vancouver Canucks. Then they lost to the Phoenix Friggin' Coyotes in 2012 after dispatching the Detroit Red Wings in Round One.

And that pretty much sums up the illustrious history of the Nashville Predators.

We're talking about a franchise whose list of Top 10 All-Time Scoring Leaders includes Scott Walker (yes that Scott Walker). A team who has been coached by the same hilarious looking man since the Clinton Administration.

Their team moniker, easily one of the worst in all of sports, was originally supposed to be decided by the fans. The best three names that they could come up with were The Ice Tigers, Fury, and Attack. Then Craig Leipold, the Wisconsin businessman who brought the franchise to life, suggested the equally ridiculous name "Preadators", rigged the voting system, and made it so.

The Preds, as they're affectionately referred to by their long-time fan, struggled to find an identity until the early 2010s when they finally embraced one of the few things the city of Nashville is known for: music. They added star-studded guitar picks to their shoulder patches, threw some guitar-strings onto their jersey numbers, traded for the husband of country superstar Carrie Underwood and called it a day. This all makes perfect sense for the team. When your arena is a couple hundred feet away from such historical music venues as The Ryman Auditorium and Tootsie's, you should probably play up the connection.

I actually visited Nashville this past winter and found the entire downtown area to be charming in a ridiculous sort of way. Kinda like stepping into a CMT theme park. I'll save my rant about how the city has embraced a manufactured, plastic image of what country music is supposed to be, thus ruining the genre's rich history and instead I'll just say that there was a "No Visible Firearms Allowed" sign outside one of the local Honky-Tonks just outside Bridgestone Arena.

But we're rooting for you here, Preds. I'd love to see the NHL thrive in Nashville. Just imagine yourself unveiling a championship banner! Even if it is just winning your division (which you never have). At least then you'd have something else to take pride in other than... 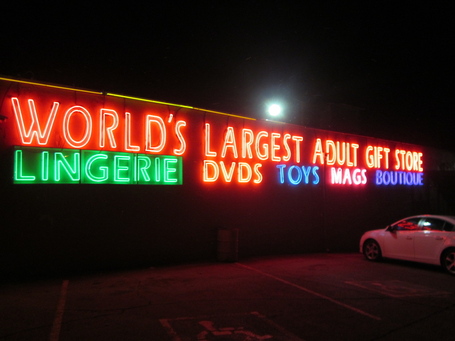