In honor of the 20th anniversary of the iconic NHL 94 video game, EA Sports has included Anniversary Mode in NHL14. So how do the 1993-1994 Bruins stack up against this year's squad?

Share All sharing options for: 1994 vs. the present: how do the Bruins compare?

NHL 94 was a great video game (though Wayne Gretzky's 3D Hockey will always have a special place in my heart). From the hokey sound track to the grunt sound effects and the awesome goal horn, the game is timeless, from the Sega Genesis systems of its day to Android/iOS emulators today.

In honor of its 20th anniversary, EA Sports revived NHL 94 this year, including an Anniversary Mode in NHL 14 that allows gamers to experience 1994 controls and sound effects with 2014 graphics and players. The result is a mish-mash of retro and modern that is a ton of fun.

So how would this current edition of Bruins match up against their 1994 brethren? First, take a look at the rosters (the B's current roster vs. the roster included in NHL 94), sorted by approximate EA rankings: 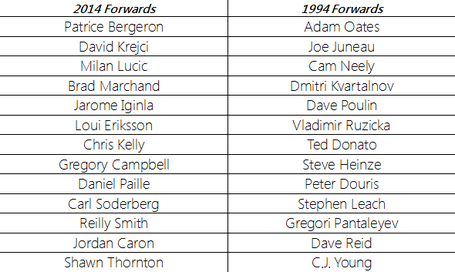 Patrice Bergeron vs. Adam Oates: This first one is a doozy. Patrice Bergeron is a better all-around player, but Oates, the current head coach of the Washington Capitals, was a point-producing machine in the early 90's. In fact, Oates finished the 1993-1994 season with a whopping 112 points in 77 games. Bergeron may be the better player overall, but when it's a video game, points matter. EDGE: 1994

David Krejci vs. Joe Juneau: A battle of productive pivots, both Juneau and Krejci are known for dishing the puck to their teammates. Juneau recorded 58 assists in 1993-1994, which is nearly the same number of total points Krejci had in his last full (non-lockout) NHL season. EDGE: 1994

Milan Lucic vs. Cam Neely: The match-up everyone would love to see: Milan Lucic vs. the player he's most often compared to. Normally this would be an interesting barroom debate, but not this year: in 1993-1994, Neely scored 50 goals in just 44 games, crushing anything Lucic has done offensively. Sea Bass takes this one. EDGE: 1994

Brad Marchand vs. Dmitri Kvartalnov: Kvartalnov appeared in just 39 games in 1993-1994, and was a tertiary producer. Marchand has been a key scorer for the Bruins since his arrival in Boston. EDGE: 2014

Jarome Iginla vs. Dave Poulin: Poulin was on the Bruins' roster in NHL 94 despite spending the 1993-1994 season in Washington. By virtue of actually playing for the Bruins this year, Iginla wins. EDGE: 2014

Loui Eriksson vs. Vladimir Ruzicka: Like Poulin, Ruzicka didn't actually play for the Bruins in 1993-1994. NHL 94 was released in October of 1993, but clearly EA didn't pay much attention to roster moves back then. Again, 2014 wins by default. EDGE: 2014

Chris Kelly vs. Ted Donato: A battle of versatile forwards, Ted Donato scored 54 points in 1993-1994, more than Chris Kelly has ever recorded in a single NHL season. No knock on Kelly, but Harvard's head coach takes this one. EDGE: 1994

Bottom Six: This is where the 2014 squad gives itself some distance. Steve Heinze was a serviceable NHLer, but the rest of 1994's bottom six isn't anything to write home about. This year's bottom six, however, has a mixture of hockey sense, solid defense, and scoring. EDGE: 2014

Zdeno Chara vs. Raymond Bourque: This is a tough one. Zdeno Chara is the top-ranked defenseman in NHL 14 (and the fourth-ranked player overall), and is inarguably one of the best defensemen in the NHL. However, Bourque received a ranking of 99 in NHL 94, and recorded 91 points in the 1993-1994 season. Yes, as a defenseman. EDGE: 1994

Dennis Seidenberg vs. Don Sweeney: A battle between two dependable blue-liners, both Sweeney and Seidenberg blocked shots and weren't afraid to throw hits. If those two categories are a wash, offense tips slightly in Seidenberg's favor: Sweeney scored 21 points in 75 games in 1993-1994, while Seidenberg edged him with 23 points in 2011-2012. EDGE: Tie

Johnny Boychuk vs. Glen Wesley: A tremendous defenseman in his prime, 1993-1994 would be Wesley's last season as a Bruin. He put up 58 points in 81 games, far surpassing any season Johnny Boychuk has had. EDGE: 1994

Bottom Five: As was the case with their forwards, the 1993-1994 Bruins really bottomed out when it came to depth defensemen. Gord Murphy didn't even play for the Bruins in 1993-1994, and the rest of those guys barely made an impact. With up-and-coming players like Torey Krug and Dougie Hamilton mixed with a dependable vet like Adam McQuaid, this year's team gets the nod easily. EDGE: 2014

Backups: Chad Johnson and Niklas Svedberg appear to be quite competent NHL goalies, and the 1993-1994 backups sported sub-.900 save percentages and GAA's at or above 3. Yikes. EDGE: 2014

The 1993-1994 Bruins had some impressive firepower. The Bruins' first unit in NHL 94 was a line of Neely-Oates-Juneau, a defense pair of Bourque-Wesley, and a not-actually-on-the-team Andy Moog in goal. While this year's Bruins may not have that kind of Hall of Fame firepower on a single line, their depth makes the 94 squad look as thin as paper. The 1993-1994 Bruins lost in the second round to New Jersey; perhaps the depth of this year's team can get them a bit further than that. EDGE: 2014