The NHL brain trust is still insisting that the league may not release its players for the 2018 Olympics. How drastically would this alter the Olympic hockey landscape? This infographic takes a look at what percentage of each team is made up of NHL or AHL skaters.

Share All sharing options for: Sochi 2014: Just how "NHL" are the Olympics?

Every four years, the NHL shuts down for a couple of weeks in February to allow its players to represent their countries at the Olympics. Despite this being great exposure for the league and a huge honor for the players, the league is insisting that it may not release its players in 2018, threatening that Sochi will be the NHL's last Olympic go-round.

There are some who would prefer this, insisting that Olympic athletes be amateurs; others, however, consider Olympic hockey some of the most exciting in the world.

One thing is certain: if the NHL stops allowing its players to go to the games, things in the Olympic hockey world would change drastically.

I made an infographic of what percentage of each country's squad is made up of NHL or AHL players. The main reason is that most consider the NHL the world's best league, so logic dictates the each country's best players come from the NHL. Following that thought process, the countries with the highest percentage of NHLers would be the hardest-hit by an NHL ban on participation.

Unsurprisingly, the world's best teams would be most affected by an NHL ban. Would American and Canadian amateurs fare as well against KHLers or professionals from the mid-tier leagues in Sweden and Finland? If the NHL continues its holdout, we may find out. 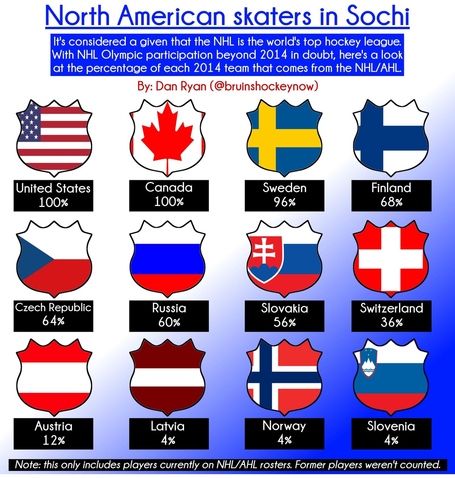