What Ails the Bruins' PK?

Did the loss of Seidenberg or Kelly to injury result in the Bruins recent struggles on the PK? Let's take a closer look and see if what or who is the culprit.

Share All sharing options for: What Ails the Bruins' PK?

It's not exactly news that the Bruins penalty kill has dropped off recently, falling from top 5 to middle of the pack since the start of the season. It's easy to look at roster and note that two guys the team leans on heavily when down a man haven't been in action and make the causal connection. Lets dig into the numbers and find out if in fact we can attribute this decline to Seidenberg or Kelly.

I'm going to first look at what happened before and after our injuries - acknowledging up front that these are unequal samples and not exactly the best practice for statistical analysis. Humor me.

Carved up by the key injuries to the PK crew, Chris Kelly in early December and Dennis Seidenberg just after Christmas, there are a few trends suggested (keeping in mind the imbalanced samples). The first is that goals against/game has actually risen by 60% since the latter went down (comparing 11gp to 40, fyi), so no, your eyes are not deceiving you. We are being scored on more of late.

However, the cause is definitely not goaltending. PK SV% has actually risen since the loss of everyone's favorite shot blocker and is up over a full percent above the season average. So I guess that's yet another teachable "go fuck yourself" moment to those blaming Rask.

Notable is that the PP opportunities for the opponent has gone up over the same span by nearly .5/gm, or 1 additional PK every other game. That increase is quite significant and is accompanied by a slight increase in shots against, which was already rising when Kelly went down.

Now lets carve up the data in a more consistent way and see if we're trying too hard to read meaning in the tea leaves or if there's really something there that's not attributable to normal game to game variance:

The charts below depict the rolling average of each ten-game segment. Lets see if we can see any trends developing. Please keep in mind that there Seidenberg was actually injured two games prior to the second orange dot. The first lands right on Kelly's injury.

Once again as we can see from the 10-game segment rolling average of the team (mostly Tuukka) PKSV% isn't the problem. There was a drop between the Kelly and Seidenberg Injuries but the goalies have sprung back to nearly their best all season in the games since Seid's absence. 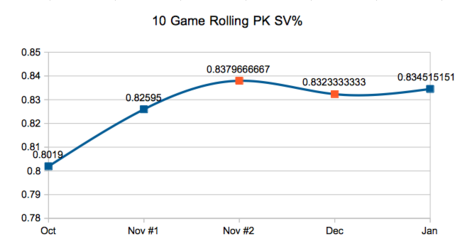 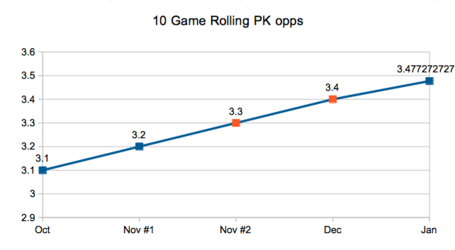 Hmmmm. I dunno, not sure I can divine a trend here... That's a pretty clear upward swing, though there's the slight silver lining in that it's stopped progressing at the same steady rate and looks like it may level off or begin descending. The goalies got off to a bad start, but they were fortunate to have some discipline on their side. All in all, the team is up nearly 4 times-shorthanded every ten games from where they were at the beginning of the season. That there could be a problem. 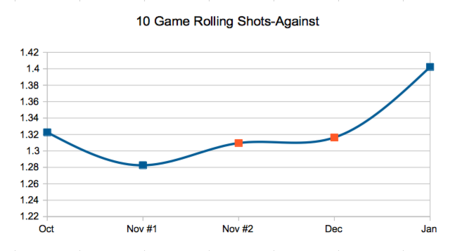 Given the fairly low variance between earlier data points, this would indeed appear to suggest that Seidenberg successfully limits shots on the penalty kill and is missed. Please note that the upswing begins slightly before that fourth dot, which aligns with his departure.

I've been talking of shots rather than shot attempts in this post entirely because of the following chart: 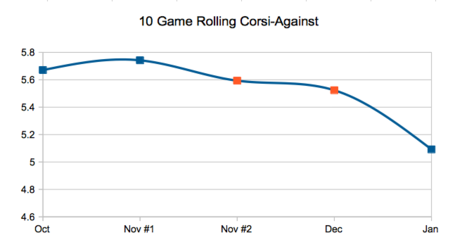 Granted this bears further study beyond a single team's half season, but what comparison of the shot and Corsi rolling averages would seem to suggest is quite logical: it's more important to keep shots down rather the overall shot attempts on the PK because teams are far more able to exert persistent, meaningful control over shot quality on the PP, as manifested in much lower save percentages league-wide versus even strength. I mean, that's kinda the point of the powerplay, to penalize a team for an infraction by throwing them in a situation where goals come easier.

This would suggest that a different skill set is valuable on the PK and that players who are a shot-attempt hemorrhaging liability at even strength could have useful abilities when facing a man advantage. Even the best shorthanded threats can only offer a tiny offensive zone possession reprieve, so the goal of advancing or maintaining control of the puck is not as critical and can't outweigh effective defensive positioning that keeps shots from the net. Seidenberg would seem to have an impact on limiting the danger of fire, if having a negative impact on the amount fired in total.

(Sidebar: In my research I discovered that in his career Greg Campbell is the very worst forward in the NHL at limiting shot attempts. He's merely 2nd worst at limiting shots. I've written in the past that Campbell's PK minutes justified his remaining on the roster in spite of poor even strength performance. It appears I've made the error of appealing to authority here in assuming Claude Julien's assignment of forward-corps leading PK minutes was well placed.)

All this said, let us not overstate Seidenberg's impact. The above graph of rolling shot average amounts to approximately 5 extra shots per 10 game span. Which our goaltending should save 4.16 of. So it's an easily papered over increase so long as it's not accompanied by a concurrent rise in penalties. To our detriment, the infractions rose steadily.

Big takeaways here are that shot increase and volume of penalty kills have been at work, but discipline is principally what ails the Bruins.* However, given the low volume in October absurd success in November - and low repeatability of PK% - I'd say we were getting used to a pretty unsustainable stretch.

(*Also, I would suggest that the optics of a season high 8 penalty outing against the Islanders immediately following Seidenberg's injury and 60% SV% is probably the most to blame for the general perception of the PK.)