Belfast And UK Hockey Fans Want The Bruins To Come Back Again...Please?

After Boston mayor Marty Walsh says the Beanpot won't cross the Atlantic to Belfast, Belfast says "Fine. Can we have a Bruins game over here instead?" Here's why Chowder's resident British hockey writer Paul Wheeler hopes this happens.

Share All sharing options for: Belfast And UK Hockey Fans Want The Bruins To Come Back Again...Please? 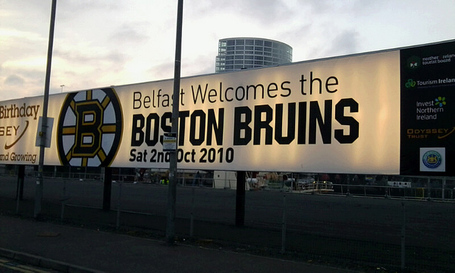 Remember earlier this week when it was revealed Boston mayor Marty Walsh had a plan that might see the Beanpot Tournament head for Northern Ireland, and specifically Boston's twin city, Belfast?

It didn't go down very well.

After seeing the furore both here on Chowder and indeed elsewhere, Walsh very quickly realised that New Englanders accepting a Beanpot away from Boston was about as likely as John Scott winning the Lady Byng, and quickly backpedaled, telling us through his press secretary that he wanted to see a "tournament like the Beanpot" but not the actual Beanpot in Belfast.

This, as expected, took all the excitement on this side of the pond down a peg, although don't get me wrong-we Brits would still love to see an NCAA team tournament over here.

Today, though, it's gone back up, after the Belfast Telegraph reported that the Belfast Giants and their ownership group, the Odyssey Trust, want the Bruins to come back to the Odyssey Arena.

For those few people who may not be aware, the Bruins have been to Northern Ireland before back in 2010. Although the team they played wore the jerseys of the Giants and were referred to as "Belfast", they were basically a UK Elite League All-Star team-an all-star team who very briefly took the lead against the Bruins through Jade Galbraith before the Bruins changed up to...oh, 3rd gear and hammered five goals. It was a joyful experience for us Brits to see an NHL team on UK ice, though.

(footnote-Jade Galbraith was supposed to play in Dundee this season in a return to the EIHL after a season away, but had what are euphemistically referred to as "visa problems" and was refused entry to the UK-reasons officially unknown but UK hockey fandom has all manner of rumours about why, none of which can be repeated here. He's something of a character, as Sarah explained.

Belfast has all sorts of links with Boston both formally and through the Giants...Shawn Thornton has family here and is ENDLESSLY rumoured to be coming to finish his career in Belfast. More relevantly still, current P-Bruin (and possibly fourth-line Boston forward) Bobby Robins played most of a season in Belfast (the UK was probably the only part of Boston fandom happy when he was retained in camp while Ryan Spooner wasn't yesterday-hey, he's an honorary Brit now to some). Here he is in action for Belfast in 2008: 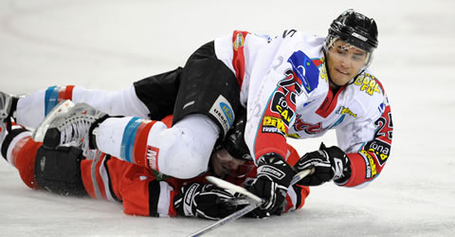 Although, he didn't exactly leave Northern Ireland on good terms after backing out of a contract the following year.

As your friendly Cup of Chowder guide to all things UK hockey, and also someone who missed the Bruins last time they were over, I'd love a Bruins return to come off...but only if it's as either an NHL preseason game or (dream of dreams) an actual regular-season game (though the chances of the Bruins playing a competitive NHL game in Belfast are pretty much non-existent for all manner of reasons).

The biggest chance of this happening will probably be another preseason game against another "EIHL All-Star" lineup in Giants jerseys...although, frankly, if it means UK hockey fans get to see stuff like this: 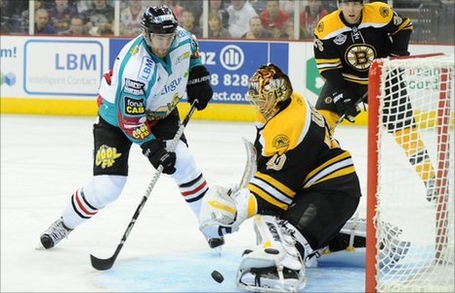 then we'll take it.

(side note-as a UK hockey fan it's still awesome to see a player wearing an EIHL team jersey shooting on Tuukka Rask without having to use Photoshop to do so).

Belfast is also a wonderful city...it's probably my favourite of all the EIHL cities to visit (although that may be due to having a fiancée from a town nearby, so I'm over there a lot even outside of hockey)-and with its close links to Boston and shared love of hockey (I know that the words "big deal" are relative when they're followed by the phrase "in UK hockey", but the Giants are a big deal-truly part of the fabric of Northern Ireland sport and with some of the most passionate fans in the EIHL). Giants fans in full flow and "full" as they say in Belfast is a sight and a half, believe me.

A Bruins visit would see hockey fans from all over the UK come together at the Odyssey just like in 2010, too. There aren't many of us compared to the US, but bloody hell, we're a passionate lot. We have to be. Bring one of the top teams in the sport to our little hockey backwater and once again we'll throw you a hell of a party.

In terms of the hockey, it would probably be more of a test for the Bruins than 2010-the EIHL has come on leaps and bounds since then and the top teams now recruit mainly from the AHL and the better Euro leagues, with the small ones using ECHL and NCAA. This year the EIHL players who NHL fans might actually recognize include former Coyote Steve Goertzen, former Oiler Ryan O'Marra, and former Bruin Nathan Robinson among others.

It should be stressed this plan is in the very early stages still...judging by the UK media reports the Giants haven't actually asked the Bruins yet. But Marty Walsh seems determined to get a representative of Boston hockey to travel to Belfast, and is behind the bid...it goes without saying us UK hockey fans and the city of Belfast would give the Bruins and their fans a hell of a welcome-and show you guys how Brits watch hockey.

It's up to the Bruins whether they want to be the ones who make the trip now. Please say yes, Peter?