Share All sharing options for: The Bruins Goalscoring woes - Whats the deal?

Its no surprise to anyone who has watched this team that the Bruins have trouble scoring goals. As of 12/22, there is one Bruins forward shooting above his career shooting percentage. Go ahead and guess if you want, but it’s none of the usual suspects.

It’s Gregory Campbell, with 3 goals on 29 shots clocking in at a 10.34% pace, which is significantly higher than his career average of 7.73%. Some takeaways from this:

- Patrice Bergeron loves to shoot, but the pucks aren’t going in this year for him. He currently has his second lowest shooting percentage of his career at 6%, with his lowest being the year following his hit from Randy Jones that concussed him. Mike Leonard had previously looked at how long it took Bergeron to get back to his usual self, but injury isn't a factor here.

- The Marchand - Bergeron - Smith line begins to show why they have good underlying numbers: They shoot the puck a lot. In terms of shots per game, they rank #1, #3, and #6 amongst forwards. For raw shots, that line is #1, #5 and #6 in terms of the whole team.

- Dougie Hamilton has been steady offensively, and is on pace to almost double his previous high in points, with 20 points through 34 games, (82 game projected total would be about 48 points) with his career high being 25 points in 64 games last year.

Just comparing their shooting percentages from this year to their career averages wasn't a great indicator of how individual Bruins were performing. So, with some help from Megan Richardson (@butyoucarlotta), every player's career shooting percentage prior to this season was taken and a 95% confidence interval for where we’d expect them to fall over their entire career was created from that data. For 19 of 20 players, this range of values will include their "true talent" shooting percentage--the value that is moved toward as the lucky and unlucky part of goalscoring evens out over time. Then the numbers were made into a confidence interval for their 2014-15 goals by multiplying the resulting low and high shooting percentage windows by the amount of shots they’ve taken through 34 games this year. The larger sample size that each player has in the past, the closer the high and low ranges will be to each other. There is a better grasp on how well Simon Gagné, with over two thousand career shots, will do in the NHL, but Craig Cunningham, with only four shots heading into this year, has a much larger range of shooting percentages. This is somewhat similar to something she had looked at previously with goaltenders, and she describes it better than me trying to rephrase it could. This concept is far from perfect, but for something as volatile as shooting percentages, having a larger range for that number to fall in is much better. What this method does is really drive home just how unexpected it is for all these players to fall below that threshold at the same time.

It’s important to keep in mind that over a relatively short period of time, even half a season or more, shooting percentages tend to fluctuate wildly. A five or ten game cold streak is part of the rhythm of hockey. Where Megan’s model has in the past looked forward over the rest of a player’s career, here we’re looking at a very short period of time, so the same conclusions can’t be made.

The point here isn’t to say that something is wrong with a player, or with the Bruins as a whole, for having shooting percentages lower than his low confidence interval value. Rather it’s to show just how unexpected it is for all these very low shooting percentage slumps to occur for so many players simultaneously. I am not good enough with statistics to figure out the probability of all of these players slumping at the same time (although if you read this and are able to, I would be your best friend). 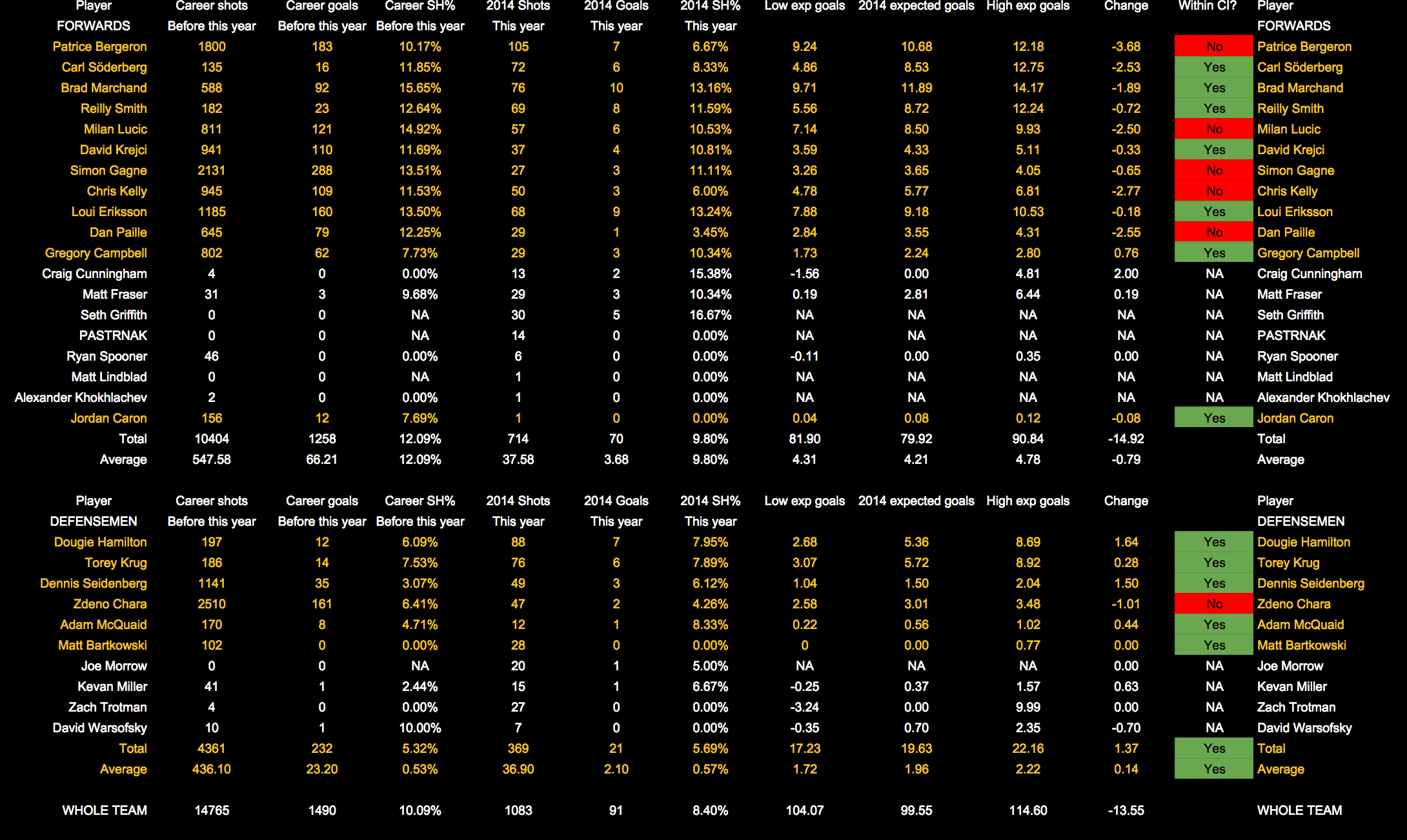 Eight of the eleven Bruins forwards with 100+ career shots before this year are producing at levels below what their previous stats say they should. (This has changed to only five of the eight with Eriksson and Marchand scoring twice, and Krejci scoring once against the Predators),

The defense, on the other hand, has only Zdeno Chara below what could reasonably be expected of him, and even that is questionable because he is coming off of a knee injury that has seen him miss half of the season so far.

How This Affects the Bruins:

An inability to score goals would be a pretty large factor in why the Bruins are unable to win hockey games right now. Using Eric Tulsky's findings that three goals in terms of goal differential equals a point, and using the numbers of every Bruins career shooting percentages times their shots (excluding players with 0 NHL shots prior to this year), the Bruins theoretically would have scored 14.34 more goals. Those 14.34 goals are worth between 4 and 5 standings points. With the Bruins currently 3 points out of the last wild card spot in the Eastern Conference, it could be the difference between making the playoffs and not. 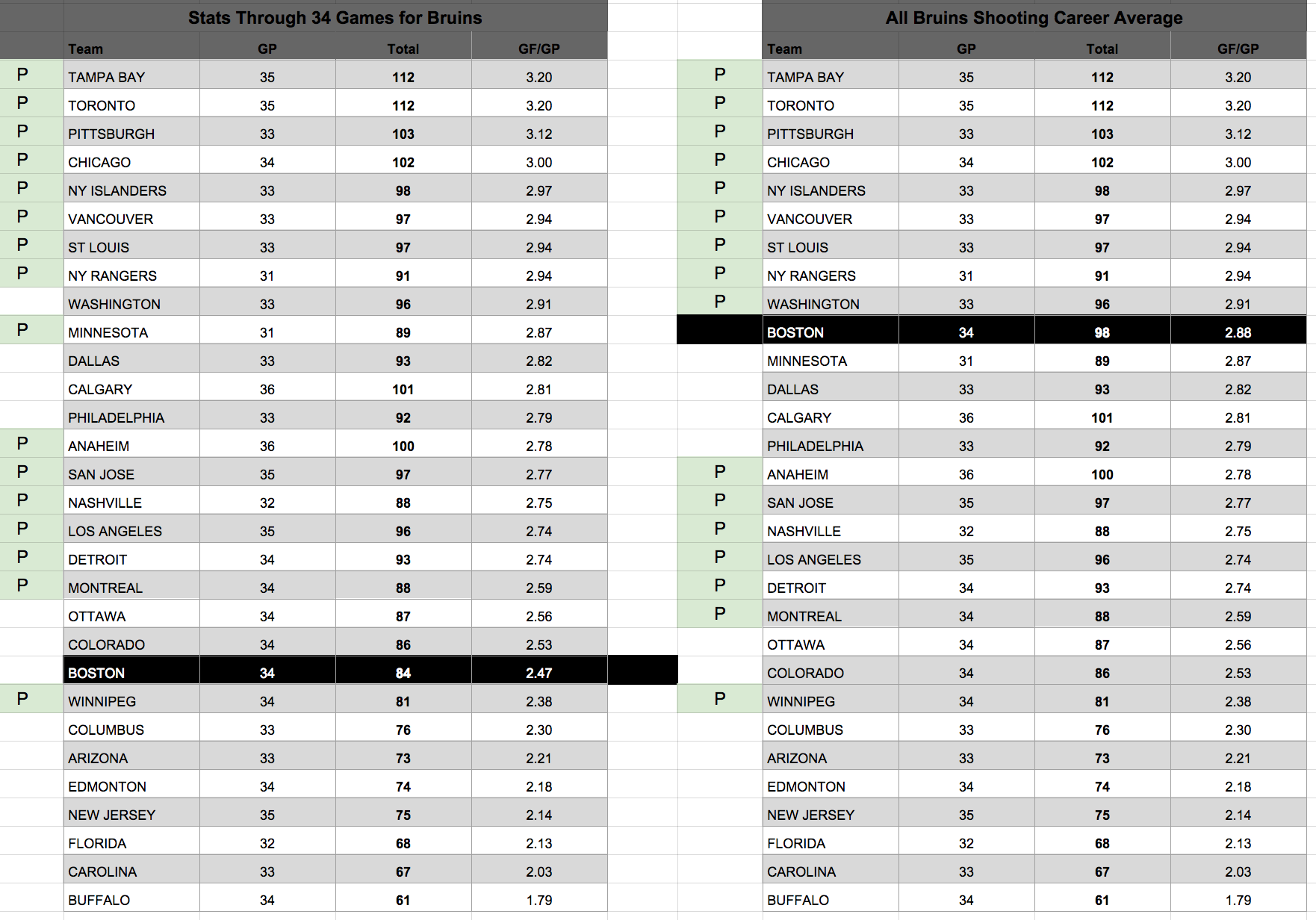 Again, Google doc of the results