Everyone knows Patrice Bergeron is the best. But it seems like nearly every time he puts on a Team Canada uniform, he ends up with a gold medal around his neck when all is said and done.

Bruins fans know that Patrice Bergeron is just the greatest. But did you know his greatness extends to international arenas as well?

Since turning pro, Bergeron has put on a Team Canada sweater six times; five of those six tournaments ended with Bergeron returning home to Ancienne-Lorette, Quebec with a gold medal around his neck.

The graphic below illustrates Bergeron's remarkable success with Team Canada, including five gold medals in various competitions and a tournament MVP award in 2005: 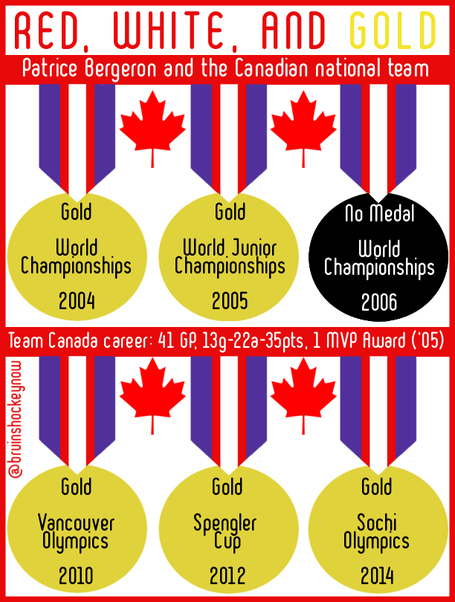 For an imgur link to a bigger version, click here.

Essentially, Bergeron has won a gold medal for Canada at nearly every level of competition. To break down the graphic, Bergeron...

The take-home point? When there's a Canadian maple leaf on Bergeron's chest, some championship hardware usually follows.
Don't get any ideas, Leafs fans.