Tuukka Rask kept the Bruins in the game in the first period, the Bruins pulled ahead in the second period, and things got crazy in the third period. Two goals from Gregory Campbell, one goal and three points for Dougie Hamilton, two assists for Loui Eriksson and David Krejci, Milan Lucic and Jarome Iginla each had one goal and one assist, and Tuukka Rask made 39 saves.

- Tuukka was great, especially when it mattered.

- Did you see they met quota? Woohoo!

- The entire first line had two points each.

- That second Campbell goal could have been overturned again for "kicking" it in, but was upheld. Phew. Also, the way the ref delivered the news that it was a good goal for "a deflection not a direction" was poetry. (I stole that thought from @JustinDOY).

- They didn't have any power plays. And gave up one power play goal.

- Chara looks tired. Defense on a whole was so bad in the first period. Feel like a trade to add a defenseman will come by Wednesday.

- The Bruins took two penalties for interference in which they shoved a Ranger player INTO Tuukka Rask. Stop trying to injure Tuukka you fools. 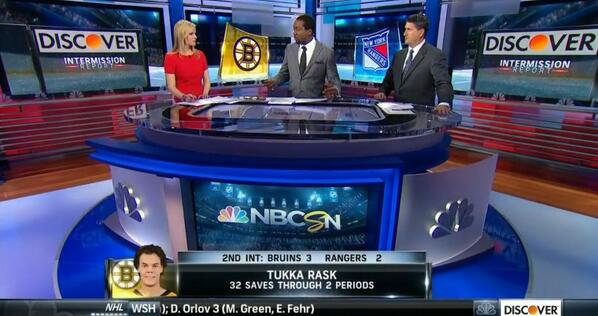 - The Bruins hadn't scored more than four goals versus the Rangers in a regular season game in Madison Square Garden since 1999 before tonight.

- This was what the goaltending matchup should have been in the semifinal game between Sweden and Finland before Tuukka was sabotaged and/or got sick with the flu. He avenged the flu. (I believe Finland would have won that game if Tuukka played, by the way.)

- Overheard on the on-ice mics was who is believed to be Johnny Boychuk saying, clear as day, "he's changing, dickhead."

Dougie's 7th makes it 2-1 in the second period:

In the third period, Campbell gets his 4th of the season shorthanded:

Campbell scores again a few minutes later to make it 5-2:

McDonagh made it 5-3 on a power play goal:

But Lucic put it away with with a minute and a half left on a deflection that was his 19th of the year:

just a mile down the road, those goals they are so pretty. RT @sarah_connors: HEY THERE IGINLA WHATS IT LIKE IN NEW YORK CITY