Evaluating the Bruins' Trade Deadline: Who is Andrej Meszaros?

Share All sharing options for: Evaluating the Bruins' Trade Deadline: Who is Andrej Meszaros?

After a good amount of talk about some legit mid-pair defenseman on the Bruins shopping list and rumors of some absolute shit-shows in their sights, the dust has settled on trade deadline day. To Peter Chiarelli's, or perhaps Paul Holmgren's great credit, we dodged one of the major bullets in vastly overrated Andrew MacDonald. We evaded mediocre over-pay Chris Phillips. We lucked the hell out in not touching Nick Fucking Schultz. And hilariously, Mark Stuart got resigned forever.

So by measure of what could have been, things could have been much, much worse. In other alternate universes, we might have taken the risk on injured Stephane Robidas or made the shrewd move of sniping severely under-valued Raphel Diaz, in both cases throwing shooting-hand obsession to the wind. With no other huge moves on D, one must assume either nobody was on offer, or the prices for good guys were absolute madness.

Given the outcome, maybe it might have been worth Chiarelli getting mad as hell and offering a little bit more for a true upgrade. Giving up a conditional third round pick, the Bruins acquired the Flyers' recent press-box jockey Andrej Meszaros. That condition is that the pick would become a 2nd if Boston either makes the ECF and Meszaros plays in 2/3 of our games, or if he's resigned prior to the draft.

The haul is a bit underwhelming upon first look, but should we write it off as such just on first impression?

Who the hell is Andrej Meszaros?

You might ask. Perhaps "Flyers castoff" is a bit unfair to our newest Bruin. For a quick snapshot, he's an offensive-minded, very poor-man's puck mover with a bit of size capable of putting up around 30pts in fairly sheltered conditions. So there you go. You may go on about your day.

He started his NHL career as a #6 guy for the Senators following a reasonably positive though by no means exceptional showing on Canadian soil in a draft+1 year for the Vancouver Giants. He broke out straight out of the gate in the NHL, leading all defensive rookies in scoring and coming in 7th for the Calder with one 3rd place (homer) vote in a stacked class (Ovi, Sid, no big whoop). Riding shotgun with declining Wade Redden, he never developed much reputation for his defensive contributions, though he continued to produce at a 30pt rate for the next couple years and promptly priced himself out of Ottawa. After a bit of offer sheet posturing, he was traded to Tampa and offered a then-crazy 4m/6yr deal. While we lack fancystat info from these years, we can extrapolate from his minutes that he was used in a fairly QoC sheltered capacity and did quite well with this deployment.

Hold up, good news everyone! We got a guy who's been a top pair defenseman... alongside #1 Paul Ranger (!) on a 66 point Melrose/Tocchet Tampa team, sure, but you know, top pair! His stint as an over 24 minute D saw his offense drop off significantly in spite of the TOI increase both 5v5 and on the PP, while his D remained pretty much team-average. This was the last time he flirted with top pair duty (in the regular season...), with good reason it would seem. Continuing to struggle under Tocchet for another season and clicking at half his offensive output, he began looking like an utter bust and a contractual albatross. Dealing Meszaros to Philly had been Yzerman's first order of business as incoming Lightning GM, by all accounts a cap-dump intended to clear room for the resigning of Martin St. Louis. Heh, funny symmetry that the aftermath of these transactions for Tampa should play out on the same afternoon.

His Philly debut saw a return to Ottawa form as a 4/5 guy, though you Bruins fans may remember him from the 2011 playoffs where he was forced back into top-pair minutes in the absence of Chris Pronger to delightfully disastrous results. Maybe he's been a Bruin all along. Back to the cusp of the second pair the following season, he turned in another roughly career average year before the injury bug bit. Meszaros experience of the abbreviated season last year wound up being an even more abbreviated affair, with him scarcely seeing the roster due to injury. He came into it soon after surgery to his back and achilles only to go out with a shoulder injury to his shooting side. His stats from that season, conventional (2pts) and otherwise (-12% CF Rel), paint him as the worst defenseman on the Flyers, suggesting that his injuries left him a shell of his former self.

This year he's bounced back to the middle of his meager pack. He was in the process of catching up to Timmonen in for 2nd in production from the blueline in spite of fewer games played and is chasing #1 Streit in rate. Flyers fans hoping for a PDO bounce from his bad luck in 2013 got it this season, as he jumped to the highest on his team (and among the rumored Bruins' trade targets) on the back of an on-ice shooting percentage unsustainable for even the league's top forwards. He continues to be charitably a question mark defensively, offering up little in shot suppression and plenty of anecdotal evidence of positional mistakes.

Where does Meszaros factor into the Bruins D? 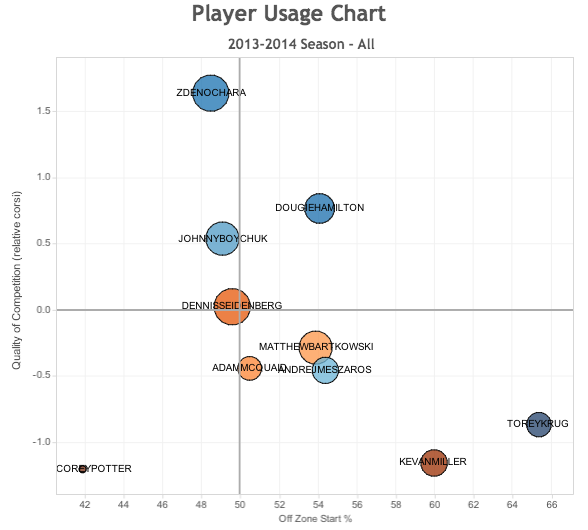 As you can clearly see, Meszaros' usage in Philly sits right in the middle of our team's bottom pair deployment, and he'd be a plug-and-play guy and a great fit if that were in fact the team's need. It might be tempting to see that Meszaros is blue and declare him a lock to improve upon Bartkowski and McQuaid, but while it's certainly arguable it's not quite as cut and dry. Andrej (do you mind if I call you Andrej?) is scarcely above average for his team, which is mostly comprised of averageness on D, and is below the water line in absolute possession terms. If we consider the players' deltaCorsi - again the difference between the expected results from their usage conditions and the reality - Meszaros comes in just at par on his bad team's relatively easy minutes, entirely on offensive merits, while Bartkowski comes just under much loftier expected results. McQuaid, terrible as he is offensively, thoroughly destroys Meszaros in the defensive side of this measure. Man oh man does he have Miller beat, though - but will Claude unseat a righty?

Meszaros has played with lower QoT than any of the Bruins defense - carrying Luke Schenn around will do that - so we could anticipate the upgrade in his surroundings will give him a boost, though it's not an epic gulf between him and Bart/McQuaid.

The bad news: he's being rolled out in almost the exact same way as Wade Redden's Revenge and is showing nowhere close to Redden's defensive performance, which outstripped even a very low-event expectation from playing a sheltered role on good St Louis and Boston teams. Their offensive output relative to expectation is pretty much neck and neck. As a sheltered third pair option, last year's Redden looks preferable. So consider him the approximate cap on your expectations, hopes and dreams.

While Chiarelli reportedly valued Meszaros above others on the market for his history of playing on either side, Julien's handedness fetish will place Meszaros on the left-hand side to keep consistent LR pairs whenever possible. And though the Slovak Connection has a lot of people proposing Chara/Meszaros pairs, considering Andrej's history in big minutes we might be best advised to avoid this configuration. Given Boychuk's emergence as a valid option to anchor his own pair, I'd anticipate the following: Chara/Hamilton, Meszaros/Boychuk, Krug/McQuaid (when healthy). In the interim while the last man is injured, Miller is likely to remain in the lineup in lieu of McQuaid.

Any alternative permutation that places Meszaros alongside Krug or Bartkowski has defensive liability written all over it. Meszaros/McQuaid might form a decent complimentary pair, but presupposes #4 minutes for either Bart or Krug.

Perhaps a gander at Meszaros' recent past can further inform the roster decision. Charting his With or Without You info for his top partners since 07/08:

We don't see a clear trend in Meszaros' impact on his partner, though there's perhaps the suggestion that he gives a modest bump to lesser defensemen. That tiny-sample Gervais bar is in there just to show how damn badly he fell off in his injury hampered year. Looks like he's more or less back to form.

All points back to the fact that the Bruins need - a top four defenseman - was only really filled by a solid but unspectacular bottom pair player.

Who the hell is Corey Potter?

Corey "Stop Calling Me Harry" Potter is a former 4th round pick of the New York Rangers and product of the US National Development Program who has bounced from system to system without so much as seeing a cup of coffee until his prolonged stay with the Edmonton Tire Fire. He's alarmingly seen mid-pair minutes there before even the Oilers came to their senses and busted him down to the press box. As you can see from the above 16 game stat line, he was pretty much garbage among garbage for Edmonton in spite of tremendous luck.

Hockey's Future has the most hilariously generic analysis of his potential:

Potter is mostly a defensive defenseman who can also play an offensive role when needed. He has good size and has finally filled out to 200 pounds, which will help him deliver some punishing hits. He’s a decent skater who has the ability to jump up into plays and help create offensive chances.

So, he's a guy who plays defense and he hits some guys.

Where does Potter factor into the Bruins D?

Hopefully not at all. Think of him as 2014's Boris Valabik. If we're seeing him in Boston, we've been struck by the plague. A justifiable castoff from Oilers country, he might do slightly better not being zone-burried (see above) and getting something akin to Miller's usage, but he projects only to be a marginal improvement over the latter. Unlike Meszaros, the upgrade in his QoT isn't miniscule, he should actually see better mileage just from entering a vastly better surrounding conditions.

The deadline isn't all bad - though nor is it particularly good. Incoming is a solid bottom pair offensive defensman offering proximate abilities to Matt Bartkowski. Coming along for the ride is a 30 year old spare part who might unseat Miller, who in spite of the fan-fare surrounding his arrival and his extension, is a sub-replacement level player at this stage of his career. All in all, depth isn't a bad thing to have, and lord knows the Bruins, both Boston and Providence, have desperately needed it this season.