Great to here were finally getting some bodies back tonight

Niklas Kronwall is a dumb jerk of a Detroit Red Wing, and he always has been. Known for "Kronwalling," the act of using a lack of prior suspensions to prevent yourself from getting future suspensions despite dirty hits, Niklas Kronwall is the rock that holds the Detroit Red Wings defense together. Unfortunately for Detroit, they'd be better off with another guy named Niklas back there. But the other guy retired. Suckers. Of the detritus (more like Detroit-us heyooooo) left, here's where Kronwall fits in: 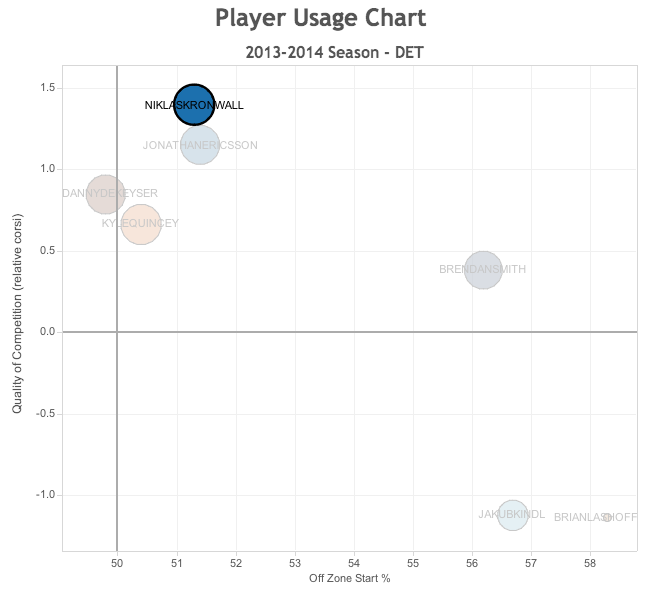 As you can see, he's their hardest-use defender, and he's not completely in over his head. I also haven't heard nearly as much about him hitting dirty, so maybe he's busy trying to play defense?

Aside from not hitting and not playing defense, what has Kronwall been up to? Getting himself up to 10th in Defenseman scoring, is what he's done. The top 9 defensemen (in terms of points) all have over 50, and Niklas is sitting at 10th with just 49 (8 goals, 41 assists). This ties him with Daniel Alfredsson for the lead on the Red Wings. Kronwall also sits at 3rd on the team in PIMs, behind only Reilly's Brother and Kyle Quincey.

The Bottom Line is that we'll be seeing quite a bit of this fellow and I wouldn't buy front row seats this round, mainly due to him stinking up the joint.