A look at the numbers behind last night's tragedy

Remember, I am not very good at this. Because

Like most of you, I am just learning it all and trying to get a feel for it. That being said, the Bruins stats show that while they weren't bad defensively per se, they were garbage offensively.

Here is the shorts attempted chart (Fenwick) for all situations - so this includes when they had the goalie pulled and all that garbage. This is just pathetic. I made it extra easy for you to understand with by boxing the important part: 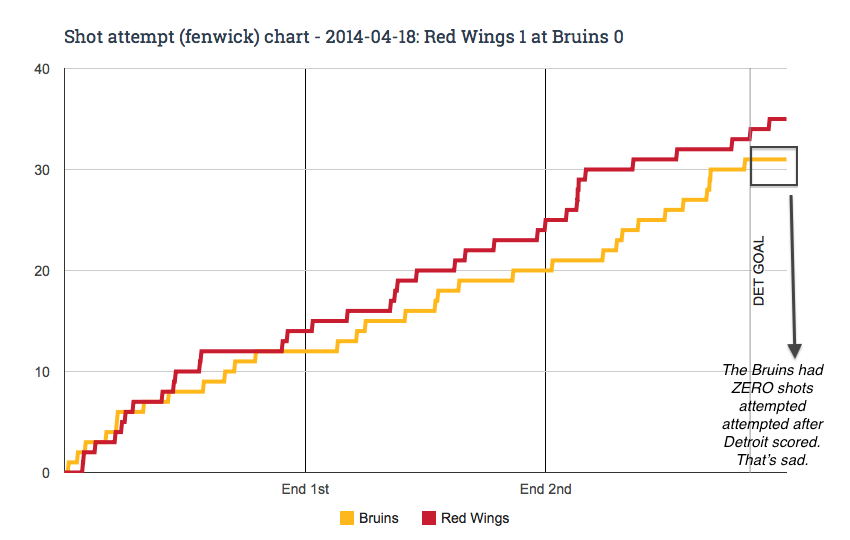 This table can be sorted. Click the stat you wish to sort by at the top of the table to do so. This info was also taken from Extra Skater, so it can all be found here, of course.

Set everyone on fire.

You may be saying "don't panic, it's only one game." or something similarly rational, but I am a blogger dammit, and I will do what I want. /Kicks a dumpster. Okay first of all - zone starts! Of course Corey Potter (and Justin Florek, even though he wasn't bad in my opinion) started 75% of their zone starts in the offensive zone. Shawn Thornton was next with 66.7% and surprisingly, Loui Eriksson was fourth with 62.5%. On defense, Torey Krug also experienced sheltered zone starts at 60%.

I chalk this up to the third line being used in a role gone wrong - without Chris Kelly (or, ahem, Ryan Spooner), they were reduced to a slightly more effective fourth line. But in a third line playing like a fourth line is awful. Carl Soderberg also had 50% zone starts in the offensive zone, and he was 3-for-8 on faceoffs.

Looking at Corsi For % relative, Loui Eriksson had the best on the team. The third line generated a lot of good scoring chances at times, but they also were sheltered in their zone starts. Patrice Bergeron was next best with 56.5% and he started 38% of his shifts in the defensive zone.

More than half the team was in negative for CF%, which means they didn't have possession very much, which sucks. And that's how they will lose the series if that doesn't change quickly.

The Bergeron line faced the highest quality of competition while the Chara/Hamilton d-pair faced the best from Detroit as well. They were nearly successful in shutting down that Datsyuk fella. NEARLY...here is a chart that shows how much everyone went up against their opponents.

This is pretty self-explanatory, and I hope I made it easy to understand. Given that I had no previous understanding of how to read or make these, I hope it's pretty clear. It just shows who went up against whom and how often they did so, with the darker red being the most frequent each player saw a given opponent. Their success against said opponents is something I will try to get into the next game review - they do it over at Jewels from the Crown and do a great job of it, but they are geniuses.

The power play they did have was good. They did generate some very good opportunities at times. But it wasn't enough, and it gave me flashbacks to the Toronto series last year. GET TO THOSE REBOUNDS!

I had a lot more I wanted to say, but I think the numbers really just speak for themselves. This was a bad possession game, and say all you want about "puck luck" but if they had been more efficient with the puck, they would have probably had more "lucky bounces".

I apologize for making the GIF that is still circulating, but I'd like to state my opinion on what happened. It was stupid, and he should be punished for it - since it's not the first time he did it. There's no reason for him to do it, it's childish and dangerous and stupid (I can't stress this enough.)

A fine would suffice, I think, just to let him know they are watching him and it's not okay to do that. How he got away with it against Emelin is a mystery - I guess Shanahan was too busy packing his office up en route to Toronto. Let's see how Quintal manages this stuff.

All I know is that we can't afford to lose another top player. Without Kelly and Daniel Paille and even just Matt Bartkowski and Kevan Miller, it was pretty awful.

(Here is the incident - because I have a problem and can't stop linking to my own GIFs...then complaining about it.)

The Providence Bruins clinched a playoff spot last night. They won on an overtime goal scored by Matt Fraser - his 20th of the season. Ryan Spooner assisted. Woohoo! NOW RECALL HIM.