Share All sharing options for: Why Patrice Bergeron deserves the Selke over Foot Face and the Zombie

As we reported earlier, Patrice Bergeron was named a Selke Finalist, along with the usual suspects in Anze Kopitar and Jonathan Toews. While those two are certainly very good players, I'm here to argue the case that Patrice Bergeron (hallowed be his name) is more deserving than the Slovenian Zombie Phenom and ol' nemesis, Foot Face. Let's get started with the definition of Selke Trophy:

The Frank J. Selke Trophy is an annual award given to the forward who best excels in the defensive aspects of the game.

Guided by this "excels at defensive aspects" line, we will look at all 3 players and figure out why Patrice Bergeron deserves it more than the other two. Let's start with a usage chart, courtesy of ExtraSkater.com. 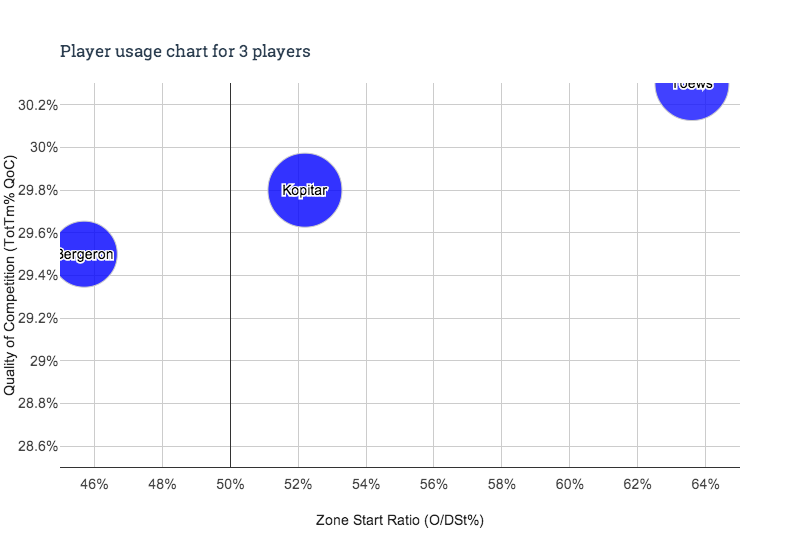 Here's how to read this:

The Y axis is "Average (time-weighted) percentage of team's total ice time that player is on ice for, of 5-on-5 on-ice opponents." That's quite a bit to write out all at once, so it's shortened to "TotTm% QoC" which is still a mouthful to say but easier to write. It is helpful in measuring how often the player's opposing players play. Higher is better. To give an example, Milan Lucic's TotTm% is 29.0, so Bergeron faces - on average - players that play more often than Lucic. Usually, on teams that aren't tanking hard like Buffalo or just plain stupid like Toronto, this means that they are better players. The higher the number, the tougher the competition.

You've probably noticed that Bergeron has a lower TotTm% QoC than the other two.

Anze Kopitar and Jonathan Toews both faced the highest TotTm% QoC on their teams. Bergeron tied with the KIL line, and all 4 of them were bested by (guess who!) Zdeno Chara. It's quite close among those five (29.9 vs 29.5), however. Bergeron's relatively lower TotTm% QoC can be mostly explained by two things: 1) The other two play out west, where TotTm%s run a little higher, and 2) the other can be explained in the X axis, explained below.

Players with a high Zone Start Ratio, like Toews, generally fall into two categories: Optimized and Sheltered. Some of these players are very good offensively, and so it makes sense for them to start nearer the opponent's goal more often. The Sedin twins under Alain Vigneault were an excellent example of this. It makes sense, right? Put your best offensive players in a place to score more often. Torey Krug has a similar deployment for this reason. The other kind of player is the "Sheltered" player. These are your Shawn Thorntons, etc. Not the highest-skilled players, so starting them further away from their own net means the puck ends up behind their goalie less often. Toews obviously fits into the first category.

Players with a lower Zone Start Ratio, like Bergeron, generally are players that are trusted to play well defensively, to drive play forward and get out of the defensive zone. They also means that they will start against the players that opposing coaches run out in the offensive zone, who fall into the two previously mentioned categories, especially when there are last changes. With Julien at the helm, you're likely to see Bergeron start in the defensive zone often on the road, so that he's ready for whatever matchup the home coach makes. Sometimes this means he's against the other team's At home, he's going to match up against the better offensive players.

So now that we have an idea about usage, let's see how those guys do with that usage. Going by more traditional stats, here's what we've got:

Okay, so Bergeron led them in goals despite starting in the defensive zone more than the other two by a significant factor. But this isn't a good measure. Let's move onto another mAnybody who knows about #fancystats will tell you that they are counting stats and not as predictive. So let's go a little deeper here:

CF% means "Corsi For Percentage." Similarly, FF% means "Fenwick For Percentage." In both cases, the "rel" column after it shows that stat relative to the player's team. Corsi is a measure of shot attempts. Basically, it's Goals, Shots on goal, Missed shots, and blocked shots all added up. It's a proxy for possession of the puck, and the higher your CF% is, the more often your team has the puck. Fenwick is very similar to Corsi, but without blocked shots. Both are named after people and not acronyms. As you can see, in terms of possession, Bergeron is number 1 in all 4 categories.

And this is true for more than just these three players. Bergeron leads the whole league in three categories. The one exception? Zach Parise is #1 in the league in FF% Rel. Bergeron is second in that category.

Now go back and look at that usage chart above. It's got to be tough to get the puck from your own end and move it all the way up so often. All of the faceoff wins help, but they don't account for all of it. In plenty of situations, there's a lot of backchecking involved. If you're on Bergergon's ice, you're not getting his puck unless he wants you to.

And what could be a better measure of a player excelling at defense? Not only is he good at getting the puck to start, he doesn't even afford his opponent the opportunity to try their luck on his net. It's incredible, really. I hope everyone really takes the time to appreciate that we are watching a truly elite athlete at the peak of their career, doing incredible things and making them look easy. Bergerons don't come around every day.

But Selke Trophies for Bergeron should be coming about once a year, and he's due. We'll see how the PHWA, who last year voted Alexander Ovechkin to the all-star team twice, votes. While we wait, why not enjoy a video of Bergeron's run through the playoffs last year?

Damn, he is incredible.