Varlamov, Not Rask, For Vezina

Share All sharing options for: Varlamov, Not Rask, For Vezina

Ed. Note: This piece is meant to be a writer's statistics-based argument as to why Rask may not win the Vezina. It is not in any way meant to be an endorsement of Semyon Varlamov. We feel it's important and interesting to look at every possible outcome for these awards, especially where possible Bruins wins or losses are concerned.

Let me start by saying I love Tuukka Rask. He is the best goalie on the planet and a worthy Vezina finalist - but based on numbers alone, he should not win the trophy. Instead, I'm backing Colorado's Semyon Varlamov.

A quick glance at the relevant numbers (save percentage/5v5 save percentage), indicate Rask had a superior season. His league-leading save percentage at 5v5 was .7% higher than Varlamov's, the largest differential between any two players, in fact. So yeah, his candidacy is well-deserved. The one issue here is that comparing the sv% of those two players lacks some important context, namely that Rask played behind a superior team. 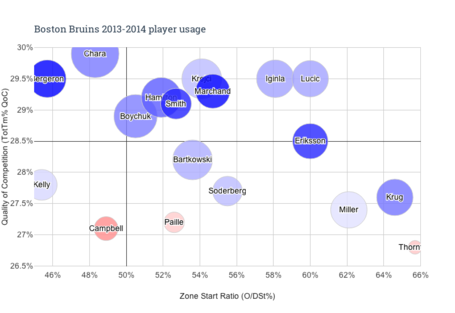 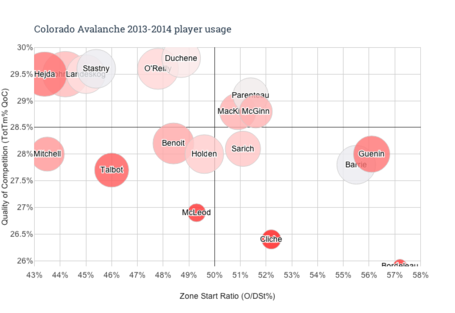 both charts via Extra Skater

That statement is hardly a surprising one. Anyone who's watched either team could surmise that. The league standings and other team stats back that up as well. Still, let's take a look at the 5v5 Fenwick stats of both teams for players that played 1000 minutes.

Looking at the chart, you'll notice Colorado had only one player, Stastny, that was a positive possession player, indicating that Colorado spent a considerable amount of time in its own zone. Stastny, by the way, would have ranked 14th on the Bruins in FF% (ignoring the fact that on the Bruins he would have better teammates, of course). In FA/20 Colorado trails Boston considerably as well. No one on Colorado would have cracked Boston's top 10 and only five players would've made their top 15.

The defense is especially ugly. Think about this - based on FA/20, only Andrej Meszaros had worse numbers than anyone on Colorado. Still, he'd be their third best defenseman. Quality of competition between Meszaros does not dramatically differ from those on Colorado he trails (Sarich and Barrie), by the way.

It's not simply about the number of shots Varlamov faced, though. While the information is not as accessible as quantity, the quality of shots is another thing to consider. Varlamov did not have the luxury of playing behind Patrice Bergeron (who's expected Selke winner) or Zdeno Chara (who should be the Norris winner). You better believe that counts for something as far as the quality of the shots Rask faced. By forcing shots to the outside and taking away the prime real estate, the Bruins' skaters helped to ease Rask's workload.

Now I recognize that without empirical evidence, it's hard to truly assess the exact influence that Chara and Bergeron have on shot quality, so please forgive me for relying purely on The Eye Test here. Regardless, I think we can all acknowledge there's something to it.

Not only were Rask's teammates, better, but his competition was easier. Playing in the Western Conference, Varlamov, had to play against six of the top 10 teams in the NHL (based on FF%, 5v5 Close). The East, meanwhile only had four of the top 10 and one was the Bruins. They did, however, have six of the bottom 10. Varlamov had only three bottom feeders in conference as his Avalanche were among the worst in the NHL.

So there you have it, my argument against Rask's Vezina case and for Varlamov's. Rask has better numbers across the board, but considering what Varlamov had to work with, his numbers were more impressive in my eyes. If the Vezina is the de facto MVP award for goalies, was there anyone more influential on his team's success than Varlamov? Colorado finished with 112 points, how much of that was due to Varlamov's play? A lot.

I recognize that I'm handicapping Rask based on his favorable situation - things beyond his control - but I can't ignore them. Varlamov's numbers seem to be a better reflection of how good his season was than Rask's because the former really didn't have anything to help him out. There's nothing telling me his numbers were aided by players around him.

Tuukka Rask is the best goalie on Earth. This year, though, Varlamov was better.