Well That Was Wild: Bruins Fall in Shootout 4-3

Share All sharing options for: Well That Was Wild: Bruins Fall in Shootout 4-3

The Bruins unstoppable march to the to President's Trophy rolled on, laying waste to the Wi- Ok so that's slightly dramatic. Truth is the Bruins picked up a point in a game they could afford to mail in while missing a certain #46 and still managed to give the upstart Wild a fight.

Patrice Bergeron, aka the most perfect human being on God's green Earth, continued his scoring streak and is now two goals away from tying his career high of 31 goals from the 2005-06 season, when he was 20 years old. While we're on the subject of Bergeron, it's absolutely amazing to see him regain that scoring touch.

It's funny because post-Seguin trade I feel like a lot of us were wondering who was going to pick up the slack in shots with his departure, nothing against Bergeron but I didn't think it would have been him. Coming into tonight's game he was at 607 shots for according to Extra Skater, that's 11 more than Brad Marchand and 51 more than Reilly Smith. Shots are good if we haven't established that yet. As much as I'd like to see everybody of importance encased in bubble wrap and in the press box until the start of the playoffs I'd love to see Bergeron get the chance to break his personal best.

ANYWAY, a few people made note that the Bruins gave up a goal in the closing minute of the third and that CLEARLY that means they're in trouble and you should clutch your rosary or lucky rabbit's foot or whatever once we hit the two minute mark.

While the tying goal was ugly I think it's an overblown problem. In the words of our favorite puppy:

maybe, just maybe, we attribute special significance to the time of game and remember those goals better.

The numbers don't really show anything too bad either. The Bruins have scored 102 goals in the third period, tops in the league, and have only allowed 53. That's a 47 goal difference in the third period, if you want to get fancy then they're cumulative Fenwick For in close situations has also been trending upwards. 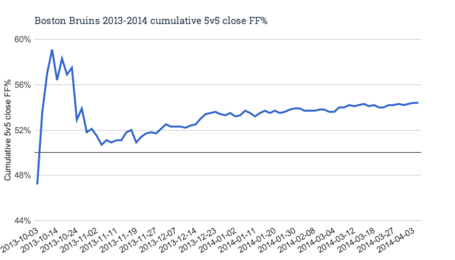 Bottom line: the Bruins are in control of the action more often than not, a very good thought going into the playoffs.

Lastly, Tuukka Rask should win the Vezina. Period. You can debate it all you want in the comments but that's where I stand.

So with this one in the books let's all go laugh at the Leafs.