Seidenberg and the Bruins: Now and Later

Share All sharing options for: Seidenberg and the Bruins: Now and Later

There's quite a bit of scuttlebutt on the health of Dennis Seidenberg these days.

It seems that every day we're getting reports of his progress at practice (he's taking contact!). KPD wrote about him. Peter Chiarelli answered questions about him...kinda. Things are happening.

Assuming he does get healthy enough to play against Montreal - and for the sake of this, let's say he will - what does the Bruins defense look like?

Let's start with the knowns.

Chara and Hamilton form the B's top pairing and that's not going to change because both are awesome. Johnny Boychuk and Torey Krug aren't going anywhere, either. Boychuk on the second pairing, Krug on the third...but who do you put in as the partner for each?

With all due respect to Corey Potter, there are four candidates for these two spots - Matt Bartkowski, Andrej Meszaros, Kevan Miller and, of course, Dennis Seidenberg.

Here's how each fared during the regular season: 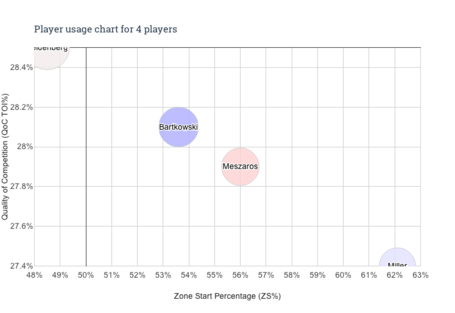 Still, we're going to use what data we have when the sample size is worthwhile. Let's explore some numbers in a more reader-friendly medium. 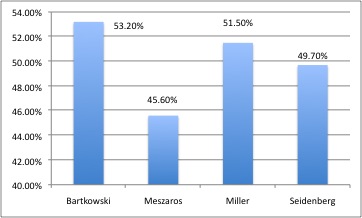 Matt Bartkowski's the clear leader here at over a full percentage point more than second place Kevan Miller. He did this, by the way, with the second hardest competition and in the second least friendly zone starts (both behind Dennis Seidenberg).

Having positive possession players is a tremendous asset, but Miller's 51.5% isn't overly impressive compared to Seidenberg's considering the former was massively sheltered. I'd consider Seidenberg's play better given the minutes than Miller. 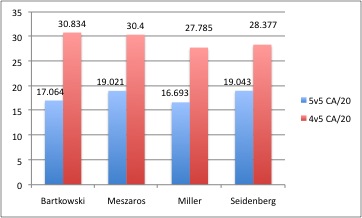 I know that these four players have gotten power play time, but I don't consider any of their value to the man advantage something to be explored. If none of them played on the power play would anyone say a word? I'm more concerned with 5v5 play and on the kill.

Once again, Bartkowski and Miller are the leaders at 5v5. Even with Miller's minutes, his CA/20 is commendable.

He may only be a defensive d, but he's cutting down shot attempts against. And the fact that Bartkowski's only .5 shot attempts behind Miller with the minutes he's played is further proof of his worth. He's the best of this bunch.

At 4v5, it's a little different. Kevan Miller is, yet again, the CA/20 leader, but now his minutes are no different in toughness than his peers. Impressive. He's also a favorite of Claude's on the kill, getting the four most minutes percentage-wise of all d men.

And by the way, his 4v5 CA/20 was second best on Bruins this year and first among defensemen. Not far behind that, though, was Seidenberg, who finished second among d men and third overall in 4v5 CA/20.

Meszaros...not actually terrible here. Better than Seidenberg at 5v5 and better than Bartkowski shorthanded. Still not really in running.

Since we're talking about who's going to play with Johnny Boychuk and Torey Krug, why not look at what each has done alongside both of them? Take a look at possession and shot attempts allowed charts for each. 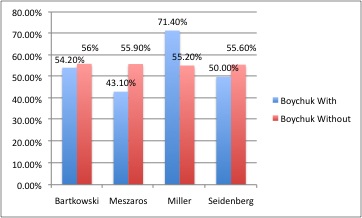 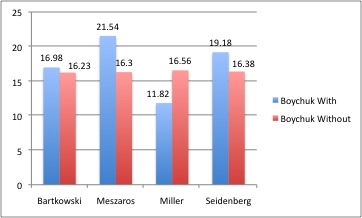 Immediately, Miller stands out on both charts with substantial improvements on Boychuk's numbers when paired together. However, the two spent a mere 3:23 on the ice together, which makes evaluations to the numbers very difficult. Unfortunately, we can't consider the sample size worthwhile.

While he did make Boychuk worse looking at the numbers, Bartkowski is the clear best option here. In the largest sample size (535:52 TOI) Bartkowski put up the best possession numbers and shot attempts alongside Boychuk and the latter's numbers without Bartkowski were not greatly changed in other pairings. Bartkowski and Boychuk play well together, so it makes sense to keep them paired, right? 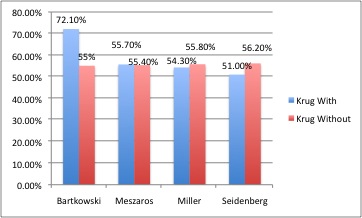 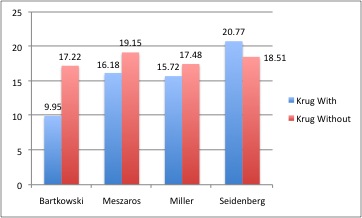 Again, we see a huge boost to the numbers, this time it's with Bartkowski pairing with Torey Krug. Like with Miller, it's important to keep the sample size in mind, which in the case totals a mere 24:07. Meszaros also has favorable numbers when paired with Krug, but in only 33:23. So, let's throw those out.

Though Miller did bring down Krug's possession slightly, he also brought down the shot attempts against. Considering that's his game, that's what counts.

Granted, some of that is due to the very favorable zone starts, but if that's how Julien would deploy the pair you can't argue its effectiveness. Miller also has by far the most time spent with Krug, more than double Seidenberg's TOI. The tandem works well with Krug going forward and Miller staying at home.

Given the strong possession, defensive and WOWY numbers with Boychuk, Bartkowski is the best candidate for that fourth defenseman spot. It would no doubt be tempting to slot Seidenberg there given his reputation, but what would be the rationale? Outside of the PK, Bartkowski has been superior this season.

Consider the opponent; Montreal is a very fast team so having a defenseman as mobile as Bartkowski is helpful in shutting that down. Seidenberg, as good a shutdown defender as he may be/have been, does not offer that option. To say nothing of zone entries, which Bartkowski is much better at than Seidenberg.

Take a look at what Bartkowski did against players that have been frequently matched up against Boychuk and Krug during the regular season. 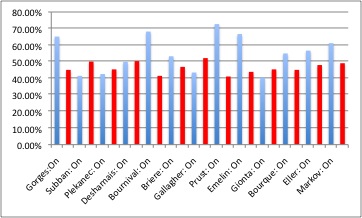 Admittedly, these numbers aren't convincing on their own (but he's a better possession player vs. Subban and that's pretty cool). Take a look now at his matchup against these players in terms of shot attempts allowed (CA/20). 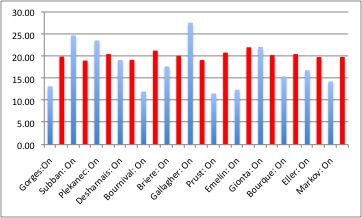 As you can see, Bartkowski does a pretty good job cutting down the attempts against. For a fourth defenseman, you can't really ask for that much more. Put him in the lineup, Claude.

Regarding that last defensemen spot it goes to Dennis Seidenberg, right? Not so fast.

Scott McLaughlin wrote a great piece on putting Seidenberg's impact in perspective and I recommend taking a look at that if you're committed to him returning to the lineup. Instead, I'd like to see Kevan Miller in.

Again, Miller's posted solid possession numbers - or at least, better numbers than the competition - and a very strong ability to lower the shot attempts against. I was more impressed by what Seidenberg did with possession, but when you factor in Miller's ability to supress shot attempts (especially on the PK), he presents the better option.

Admittedly, Miller did so in far easier minutes, but the devil you know is better than the devil you don't. And, Seidenberg's coming off an injury. Stick with Miller.

There you have it:

Of course, this might make you wonder: is there still a spot for Seidenberg on the Bruins?

Next year, the Bruins have Chara ($6.9M), Boychuk ($3.3M), Seidenberg ($4M), Hamilton ($894K !!!) and Miller ($800K) under contract. Bartkowski and Krug are both RFA's but we know Krug's coming back. Bartkowski? Well he definitely should. I can't imagine the Bruins would cut ties with such a promising player this early (that's very unlike them, right?) so he'll return as well.

That gives you seven defensemen. Morrow, Trotman and Warsofsky will also probably be fighting for a spot from Providence. At Seidenberg's age and cap hit, it's probably best for both parties if Seidenberg goes somewhere else to be frank.

It's not that $4 million is a salary cap albatross, but it's a lot to pay for a guy who's probably your seventh defenseman most nights. From his perspective, he'd probably also like to be somewhere where minutes are secure.

While we're looking ahead, I wouldn't be shocked to see the Bruins part ways with McQuaid either. His hit is well below Seidenberg's ($1.5M), but there'd be no shortage of suitors were he to be deemed surplus to requirements. Both of these players could probably fetch a decent return from an overzealous team at the deadline.

I wrote this piece using information from the 2013-2014 season. My conclusions are based on what I've determined should happen. "Should happen" is not exactly how Claude and Bruins operate. If I was a betting man, a Seidenberg return would probably see him enter the lineup alongside Johnny Boychuk. The other spot, due to an uncompromising belief of handiness and physicality would belong to Kevan Miller. Matt Bartkowski, the best of the bunch, would be relegated to the press box. Hopefully they prove me wrong.