It's Monaco time. The race every Formula 1 fan waits for every season. Get up early, make mimosas, and hope for crashes!

Share All sharing options for: Now What? The Formula 1 Monaco Grand Prix

Before I even got into F1 I knew what Monaco was. It's the insanely twisty street circuit with the tunnel, the one you see replicated in pretty much every racing game ever. It looks like something that belongs in fucking Mario Kart, and yet here it is in real life. Monaco is crazy shit, and you can watch it on NBC. Yeah, actual NBC, not NBC Sports. It's on this Sunday at 8:00am. That's super early, I know. Here's some reasons why it's worth getting up, fixing yourself a little OJ and champagne (Mumm's if you want to be authentic. I tend to go for Andre, myself.)

First, a little background. Monaco is the sixth race of the 2014 F1 season; so far we've already seen races in Melbourne, Kuala Lumpur, Bahrain, Shanghai, and Barcelona. Of those five races, one driver has won four of them; Mercedes' Lewis Hamilton (UK). His teammate, Nico Rosberg (Germany) won the other one. Basically, Mercedes are the frontrunners this year. Before we get too deep into that, here's how the championship actually works.

There are 11 teams, each team has two drivers. The teams are Mercedes, Red Bull Racing, McLaren, Force India, Ferrari, Sauber, Caterham, Marussia, Lotus, Williams Martini, and Toro Rosso. The drivers compete for the Drivers Championship; that's who ends up with the most points as an individual at the end of the season. Together, each team competes for the Constructor's Championship. Last year, Red Bull Racing won the Constructor's and their #1 driver Sebastian Vettel won his fourth consecutive Driver's Championship. So back to Mercedes and why they're dominating, briefly: F1 changed a bunch of regulations as far as how you're allowed to set up the car this year, and switched the engines from V8s to V6 turbos, which makes them handle a lot differently, and basically Mercedes have been able to jump on the new rule changes and master them. 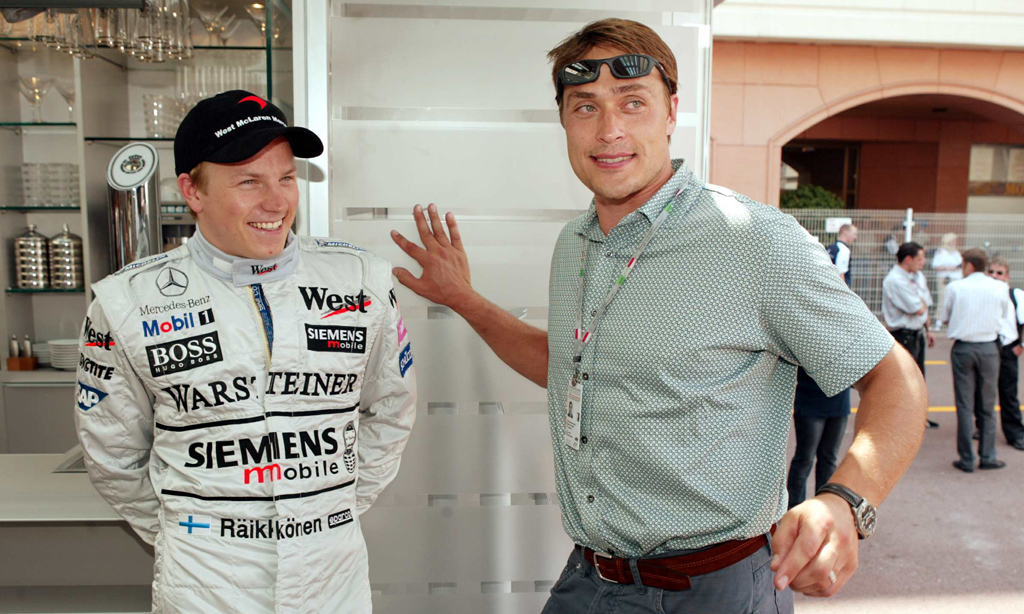 So that's the sport itself. Who should you cheer for? We have hockey analogies, too! Cheer for Ferrari if you like cheering for teams in red that like to crow about their great history and try to get the game bent to their will don't cheer for Ferrari. The other crappy thing about Ferrari is that they have great Finnish legend Kimi Raikkonen, who is besties with Teemu, apparently. Nico Rosberg hanging out at a SCF game, 2007

Teemu forever. Kimi, being Finnish, also has attended World Championship hockey games. Excellent. Why is he driving for Ferrari. This is terrible. Mercedes remind me of the Blues this year (or actually; the Bruins I suppose!) They're lovable and badass and their drivers are only within a few points of each other for the Driver's Championship lead - it's early in the season but they're miles ahead of the competition. Also, Rosberg went to an Ottawa Senators game when they were in the Stanley Cup Finals? Formula 1: as relevant to hockey as Snoop Dogg.

If you like cheering for plucky upstart teams punching above their weight class, Nico Hulkenberg and Force India are a team that used to race near the back of the grid but have scored points in every race so far. If you like the Blackhawks, cheer for Red Bull - Sebastian Vettel is the Patrick Kane of F1, a little blond dude who everyone either loves or despises but however you feel about him, you have to admit he's damn good at what he does. You have options and most of them are good!

After Monaco, there's a week off and the next Grand Prix goes to Montreal! Hopefully there will be no hockey to interfere with the partying on Crescent Street, and you won't have to get up at 8am - that race is something like a 2pm start or similar. But Monaco, for real. If you enjoy playing Mario Kart or watching some of the fastest cars on the planet skid around crazy hairpin turns barely in control of themselves, you're not going to want to miss this.