I've come to bury Greg, not to praise him.

Good players catch holy hell, trade chatter and character assassination if they go through a snake-bitten streak of more than a week or so. Why then did nobody give a good goddamn about a guy with a lot of alleged character to assassinate, Greg Campbell, not even getting a happenstantial assist for his first 17 games to start the season? Why would he remain an 82 game fixture even as it became readily apparent his very presence on the ice tilted play the wrong way? Just what the hell was he good for in 2013/14?

Campbell would rebound midway through the season to post an acceptable 21 points in a limited minute role but would be one of only two Bruins to fall in the bottom quartile of even-strength scoring rate league wide - he and Thornton. As pivot for that elite trio who managed to be in the red possession-wise on the 2nd best puck-owning team in the East, facing the easiest competition available, Campbell sticks out as the worst of the misguidedly praised Merlot line even when zone adjusted to account for his dzone start disadvantage. He managed to land dirt-worst on team in Corsi-Against/60* (*excluding a 34 game stretch of Seidenberg), facing the most rubber relative to his ice time by a long shot. And a lot of short-range shots too. While on the PK, which he's supposedly a wringer at, he'd face the most shot attempts of anyone on the team by a country mile.

And at the dot Torey Krug would have a better FO%. (jokes people, jokes)

In the playoffs Greg would lay such an egg he could provide a good source of healthy protein to the rest of his teammates. See? He brings Energy! And fuck all else along with, completely absent from the scoreboard over 12 post-season games. He provided an utter void of depth production when faltering stars would need the support. He'd also be dead last in CF%, both worst in shot attempts for and against, with a negative relative % approaching twice that of his linemates. And again only playing the very dregs the opponent had available. Were the Drew Millers and Dale Weisses of the world really that challenging? Don't answer that.

But when it comes to GRIT and LEADERSHIP, why Old Greg sure brings it. Like he did to his five fights this season, in which he was trounced all but once - that once being the HockeyFights.com community charitably awarding him what would be considered a draw for most actual, capable scrappers. The majority of his bouts would instead look like this:

(ha, some homer voted that a win. Moral victory!)

Kudos for sticking up for your compatriots I guess, but is avenging your death due to voluntary beating really the best motivator?

I entitle this "Stop trying to make 'Greg' Happen": 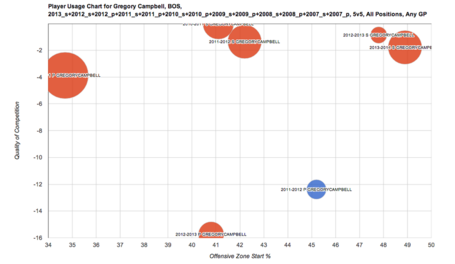 Contrary to what NBC may have told you, Greg Campbell has always pretty much sucked as a Bruin, spending his last two seasons not even in the defensive zone enough to partially excuse the incessant shelling he withstands so nobly. Look at that warrior absorbing the forward-high blocks/60! As he's done for the past three seasons. Way to give up the body, Greg, not that you're entirely the reason you have to block in the first place or anything!

This year we've had to watch through our fingers as he pulled down each and every player he took the ice with. To a man, nobody could escape his drag effect, incurring a hit of 3.6% at bare minimum. 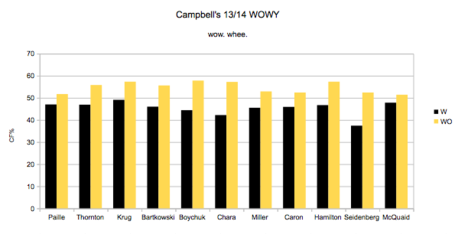 Incomprehensibly he'd play a complete full season as this trend played out. And he's been doing this for YEARS. In his cumulative seasons with the team, there is not ONE player who evaded his boat-anchor effect. 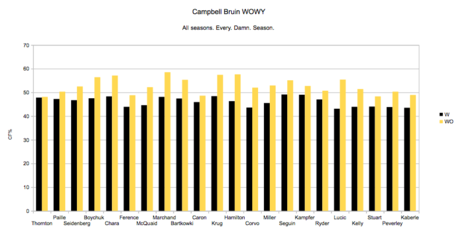 Not a single soul who shared the ice for over 100 minutes. He made Mark Stuart worse! MARK STUART!

What can I say that's positive about Greg? I dunno, he lets Bergeron catch his perfect breath for half a second so he can be yet more perfect. So I guess there's that, but surely somebody could do it without being an active detriment in those puny minutes. His GRIT and HEART consist of getting his face caved into a gritty, bloody pulp. His ENERGY amounts to defensemen being forced to expend theirs in their own zone. LEADERSHIP? He "leads" in several dubious stat categories I suppose.

Oh, here we go. Finally found a positive. His buyout would cost less than an entry level minimum for the next two years.


I'm not even going to dignify this with a grade