Krug's first full season proves to be nearly as surprising as his playoff outburst in 2013. But does he do enough to earn the title of "defenseman"?

When Torey Krug caught lightning in a bottle and scored four goals in five games against the Rangers last postseason, many thought it was case of a guy exceeding his talent and getting hot at the right time. He had played only three career NHL games to that point, with one assist and a -1 rating. He was the equivalent of a Zach Trotman or David Warsofsky—a platooned AHL defenseman with good minor-league numbers, but mainly called up out of necessity. So it was normal to expect for this under-sized, undrafted rookie out of Michigan State to fall back to earth come the regular season. He did anything but.

Puck-moving defensemen need no longer apply. Because the 5’9 (yeah, right) TK47 added all the offensive production we hoped Dougie Hamilton would bring to the table in his 2nd year with the big club. Torey Krug ended the regular season with 40 points (tied with Zdeno Chara for most among Bruins defenseman) including 18 points on the power play. He had the biggest effect on special teams, as his contribution to the Bruins man-advantage helped the club climb from 26th in the league in 2012-13, to 3rd in 2013-14—a differential of 6.9%. He didn’t stop there, either, as he went on to lead the team with 10 points (2G, 8A) in 12 playoff games with Boston.

He wasn’t only an offensive threat either. His low center of gravity makes his a prime candidate to deliver solid hip checks…

He dropped the gloves when the moment arised…

And didn’t shy away from battling in the corners.

Okay… Enough of the videos.

Krug did have his flaws. First off, he almost never started in his own zone. And I mean almost never as in barely 1 out of every 5 defensive zone faceoffs. Krug's ZS% was a combined 77.23 in the offensive and neutral zones, showing that Julien didn’t trust his ability to gather the puck following a faceoff and start the breakout quickly. He had the worst DZS% on the team. Dead last. While Krug excelled at starting the rush, the majority of that time was during line changes, and not by winning puck battles. 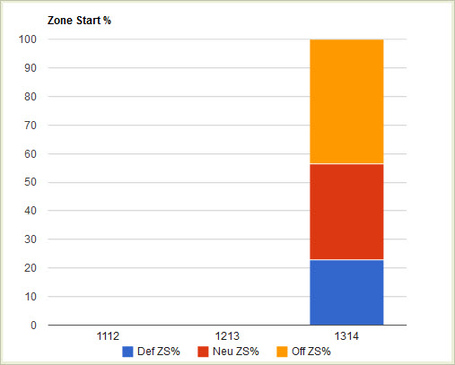 And he was on the ice against the worst of the competition, 2nd-to-last among defensemen, only in front of Kevan Miller. Matt Bartkowski was thrown out on defensive draws against quality competition more than Torey Krug, and Matt Bartkowski seemed lost in his own zone for weeks at a time. 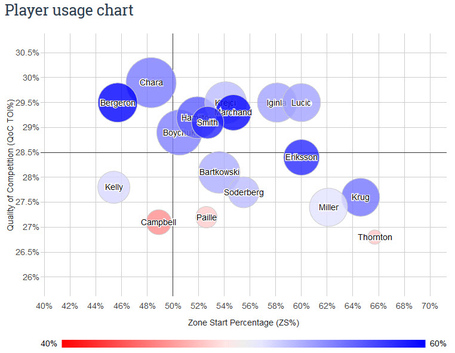 But even with his defensive shortcomings, Krug finished the year with a +18 rating, which is actually an accomplishment seeing how many of his points came via the power play. And you can’t ask for much more from a 3rd-pairing defenseman than to give up less goals than he was on the ice for—Krug certainly did that.

When that 3rd-pairing defenseman also leads the team in Corsi and Fenwick For numbers, it most certainly becomes a positive. In fact, every single Bruin’s CF60 increased when Krug was skating alongside them except for Jordan Caron, who… I mean, what the hell. At what point this season did Caron have a quality scoring chance anyway?

Point is, whatever lapses Krug has defensively are negated by the fact that he improves the Bruins offense that much more. Even strength, and power play. He’s not the all-around defenseman that Dougie Hamilton became toward the end of the season and into the playoffs, but his production—especially in the postseason—makes him a necessity for this team going forward. You put a solid, two-way defensive core in the Top 4, and Krug is one of the best 5th defenseman in the league.

I’m not saying he’s Erik Karlsson or Keith Yandle or P.K. Subban (Nah dude whaddayou tawkin' abaaht, Kroog is totally Baahby Ooah!). When you can barely see over Nathan Gerbe and Martin St. Louis, it’s not a realistic expectation. But for what he is, he’s damn good at it. And if his defensive strength and awareness improves going forward at a fraction of the rate his offense did in 2013-14, he’ll become a key cog in the Bruins defensive core.