Let me first start by saying that Shawn Thornton seems like a very friendly guy and good in the room and blah blah blah, and we don't have to argue about whether it's a good thing that he's dragging the team down because fights or whatever.  I don't remember missing him during his 15-game suspension last year. Or when he sat out all those games while we were busy winning the cup in 2011.

Even Peter Chiarelli had to eventually face facts: Shawn Thornton is bad at hockey. And he has been bad for a long time.

Ever wondered what the average scoring rates are for players? pic.twitter.com/z7rBQhn19T

And here's how Shawn Thornton scored during his time in Boston, color-coded for your convenience. Red is below average, Green is above: 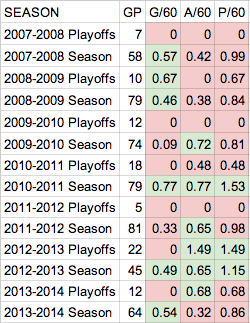 Aside from that 2010-11 season, where Brad Marchand started the season on the 4th line and ended it assisting on the goal that clinched the Stanley Cup, he's been pretty consistently bad, even for a 4th-liner. This year was no different, except that he didn't play as many games. And why didn't he play?

You don't write a report card without touching on major happenings over the year. And we can't just skip over the Brooks Orpik incident. In a game against the Pittsburgh Penguins, Orpik threw a borderline but mostly clean hit against Loui Eriksson. Shawn Thornton then tried to fight Orpik a couple times over the course of the game, but Brooks Orpik wasn't having any of it. So, Shawn Thornton then skated up behind Orpik, pulled him down, and punched him twice in the face. Orpik was knocked the fuck out and didn't move until the paramedics put him on a stretcher and carted him off.

Shawn Thornton got a 15 game suspension, a low number for what happened because he hadn't been involved in a suspension-worthy incident before.

This was a gross display of aggression, leaving many sick to their stomachs. Shawn Thornton supporters and detractors alike couldn't believe what they had just seen - a man going off the handle and very thoroughly crossing the line. It was awfuly. Thankfully, Brooks Orpik was mostly okay.

He also took up a spot on the bench that an actual hockey player could have taken. And for that matter, an offensive zone face-off.

Shawn Thornton is gone, baby, gone! Regardless of your feelings on the matter, he's worse than Andrew Ference was when he left and we all figured that one out. It'll be a shame to prolong him taking over for Dale Arnold in the NESN studio.

Wish you had gone out on top in 2011, Shawn. At least you're not coming back.