This is a report card for a guy born in Germany. Germany is a country in Europe. We'll get through this together, people. (*This report card is seven days past due. Punctuality isn't a strong suit.)

Should We Panic About Dennis' 2013-2014 Drop In Possession Numbers?

If you scroll through the chart above, you'll notice that Dennis Seidenberg is at his most effective when paired with Zdeno Chara. Though, who isn't?

Becoming Chara's postseason sidekick appears to be Claude Julien's way of saying, "sorry you had to lug around garbage for six months." I'm not calling a 19 year old Dougie Hamilton garbage, but Seidenberg essentially spent an entire season as a driving instructor constantly slamming the brakes while his student made a beeline toward a telephone pole. And as far as spending a year paired with Corvo goes, it's surprising Seidenberg hasn't been awarded some kind of medal for extraordinary courage and bravery.

As far as his 2013-2014 campaign is concerned, things couldn't have been more up-and-down. Signing a 4-year,$16 million contract extension in October, Seidenberg set his sights on establishing himself as the anchor in Claude Julien's plan to decrease Zdeno Chara's minutes, with the hopes of not repeating a Big-Z burnout come June. However, by January Seidenberg found himself in need of surgery to repair a torn ACL and the Bruins scurried to paste together a blueline capable of not only fending of division stalwarts Tampa Bay and Montreal, but being able to ease the burden on their 37-year-old Czech captain.

From a possession perspective, Seidenberg posted his worst numbers - specifically Corsi and TOI/60 - since his arrival from Florida in 2009.  Though, he failed to enjoy the statistical boost his teammates enjoyed during March's stretch of 15 wins in 16 games, and a streak of 12 in a row from March 2 to March 22. Seidenberg's numbers, instead, culminated during a time when the Bruins were frustratingly inconsistent, showing they could be among the leagues elite or in the same class as a basement dwelling team from upstate New York, on any given night.

When compared to his defensive pals Seidenberg faced the fourth toughest QoC%, trailing Boychuk, Chara and a surprising Hamilton - whose rating shot up 1.6% during his sophomore season. Facing a 28.5% QoC, Seidenberg saw, in theory, his toughest regular season competition in recent years. To counteract his jump in competition, Seidenberg saw a decrease in TOI/60, dropping from 23.5 TOI/60 in 2012-2013 to 21.7 TOI/60 in his brief 2013-2014 campaign. 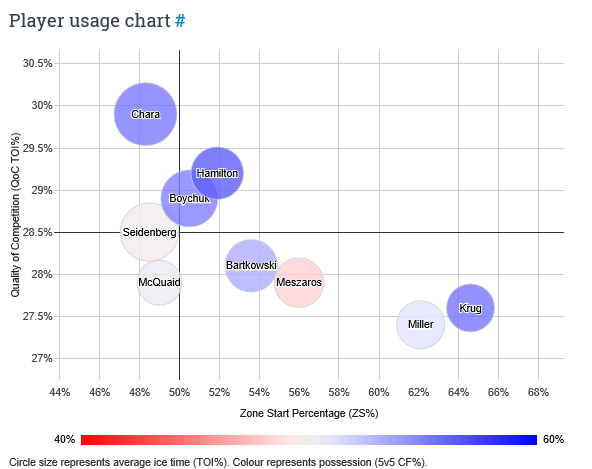 While Seidenberg was tasked with the second toughest ZS% amongst his peers, it's worth noting his CF%, if I'm allowed to ignore Meszaros' deadline-acquired-defensive-liabilities, ranked last among "regular" defensemen and the worst, so far, during his tenure in black and gold. Which I guess brings me to my point, is this something the Bruins should be concerned about moving forward?

The part of me bolting toward the Tobin bridge says "yes, of course he is. He's 33 and not getting any younger." Though, thankfully, that logic only occupies about 3% of my brain. The other 97% crammed into my enormous head, thinks that one year isn't a foreshadow of things to come. If a single years performance defined a players future, well Toronto would be enjoying year-after-year of David Clarkson netting 30 goals, and Jarome Iginla would have never exceeded the 13 goal mark following his 1997-1998 sophomore campaign. Are these extreme examples? Oh, absolutely.

Yes, Seidenberg isn't getting any younger and ACL injuries can be a bitch to rehab, but he's not going to suddenly dwarf into a healthy scratch that's eating 4-4.5 million in cap space for the next four years. Does he perhaps need his QoC% toned down a bit? Yeah, that's a reasonable assumption. Luckily, Dougie Hamilton's progressing into a promising two-way defender who appears up to the task of playing upwards of 20 minutes per night. As poor as Matt Bartkowski looked against Montreal in the playoffs, his regular season numbers give reason to believe he can develop into a top 4 defenseman in the near future. 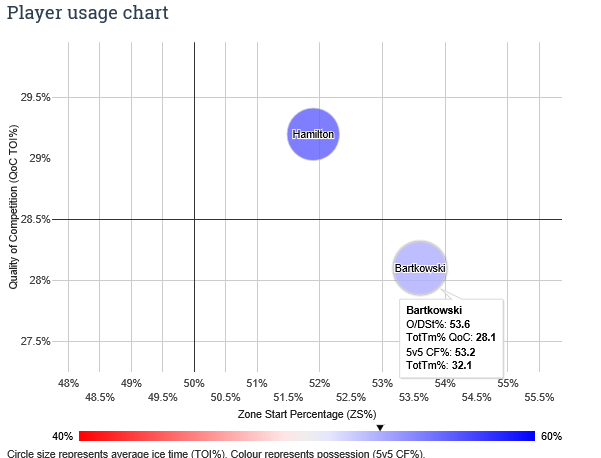 Moving forward, if Dougie and Bartkowski continue their upward development, Chiarelli is able to maintain Boychuk and Chara still has a few years of dominance to give, it wouldn't be outrageous to see Seidenberg paired with Torey Krug, David Warsofsky or another young-gun on the teams bottom pairing. Of course, Boston isn't likely to have enough cap space to make such a dream scenario occur, but if they ever find themselves with Seidenberg and his $4 million price tag as their 5 or 6, don't think of it as a waste of money. Think of it as a team that's good enough to employ two pairs of number 2 and 3 blueliners.

Chara's not getting younger, and he's going to continue to see his reigns pulled back a bit as his career approaches its finish line. Boston is poised with a strong enough mix of young and veteran defensemen to split these minutes into an effective system that produces and doesn't wear out the teams elderly. And you can bet your ass this 37 year old from Villingen-Schwenningen, Germany will play a pivotal role in the development and success of Boston's Tuukka-Rask-protectors.