Sounds like this Johnny on the Block may be on the block. Is the Johnny Rocket ready to launch elsewhere? I'm here all week folks...

Johnny Boychuk is going into the last year of his 3 year/$10.1M contract. But this season he played like he was fighting for a new one. Coming off arguably his best playoff performance in 2013, Boychuk steadily improved both his offensive and defensive game, and legitimized himself as currently* the Bruins third-best defenseman. (*Dougie Hamilton is hot on his heels)

Boychuk's career year comes during the 30-year-old's fifth season with the big club, and did he ever step up to the occasion. Dennis Seidenberg went down in late December, and two defensemen were sought upon to fill the void left in his absence. Dougie Hamilton was asked to vastly improve in just his 2nd year in the league, and Johnny Boychuk and his hip checks were called upon to provide the added defense and net protection.

Johnny had several career numbers defensively in 2013-14, including SA/60 (Shots Against per 60 minutes), GA/60 (Goals against per 60 minutes), and GD/60 (Goal Differential per 60 minutes) when 5-on-5. He also had a career-high 151 blocked shots and 158 hits, playing the body whenever possible. Basically, he allowed less quality chances than he had in previous years, and in an increased role at that. He was a +13 in the 35 games before Seidenberg went down, and a +18 in the 40 games after.

And seriously, the hits... He's the Bruins version of Niklas Kronwall.

His game wasn't just better in his own zone. He also matched his career high in goals, and racked up his most assists in a season. And his shooting percentage was at it's best since 2009-10. His personal statistics aside, the team played offensively well when he was on the ice. Behind Krug, Boychuk had the 2nd best CF/60 and FF/60 numbers among all defensemen, despite having less offensive starts than Bartkowski and Hamilton. 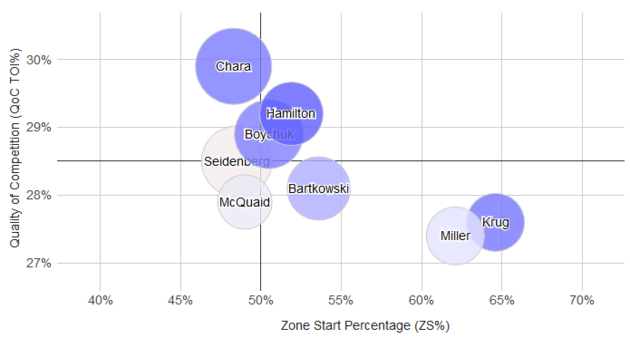 When Boychuk was on his game, it was a great sign for the team. The Bruins were 29-8-0 in games where JB55 finished with a positive rating on the night.

Johnny's name is coming up in trade talks because he's 30 years of age and going into the last year of his deal. But it's also because he's one of the Bruins' most valuable assets on the blue line, and this year raised his stock as much as ever. If Chiarelli wants to move him, he'll have to find a younger, cheaper replacement in free agency or a trade, or cross his fingers and hope that one of the younger defensemen steps up to fill that role. And it's clear there's a defensive gap between where he's at, and where Krug, Miller and Bartkowski are.

The current rumor is Edmonton, Johnny's hometown and residence during the offseason. Not only is half of their blue line restricted or unrestricted free agents, but he'd also be matched up with his former defensive linemate, Oilers' Captain Andrew Ference. So will we be seeing Justin Schultz or Philip Larsen next year instead of the Johnny Rocket? If the front office wants to win now, I believe keeping him is the best option for your 2nd defensive pairing.