Better than his linemates. And that's about it.

Let’s just start by saying the Merlot line did not have a good year this season. Whether you’re coming to this conclusion using numbers or the eye test, it’s a fact. But with all their issues, people have been able to agree that Danny Paille has the most talent and potential on that fourth line. So clearly, he must’ve had the best season of the three of them, right? Right??

Well, kinda. But not really.

That same stat that had Shawn Thornton as the 11th worst possession skater in the league? CF% rel? Paille was right behind at 12th. His Corsi Against was Bottom 25 in the league when 5 on 5. And you can say, "Well they at least use him on the penalty kill!" But he was the third-worst skater on the team in terms of Goals Against per 60 when short-handed. And he had the worst PDO (Sh% + Sv%) and PDO rel among all forwards with more than 60 minutes of short-handed time on ice.

Offensively he wasn’t much better. Based on pure point tally, he had his best season as a Bruin. But he also remained healthy for the majority of the year. Therefore his points-per-game was the 2nd-lowest of his Bruins career at .250, after a great year in 2012-13 at .370. And his Corsi/60 numbers were second-worst on the team among forwards, ahead of only Chris Kelly. Chris "The-entire-goddamn-city-desperately-wants-your-abhorrent-contract-bought-out" Kelly.

Not only did he suffer offensively, but he made the team around him worse. 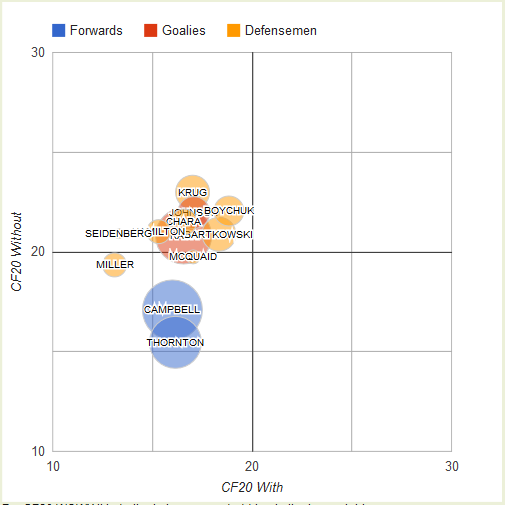 In case you’re wondering, good players fall in the lower right corner of that chart. Nearly all of Paille’s teammates fall in the top left—needless to say, not good.

Even when he made plays, half of them were flukes…

And after missing the Detroit series, Paille did come back against Montreal. He scored the opening goal in Game 2 on his first shot of the game, but then added just 4 more shots for the rest of the series. It’s hard to judge his performance in the postseason after getting his clocked cleaned in the last home game of the regular season, but for someone who was good for a couple key postseason points—he had 2G, 3A against Chicago last year—he was barely a better option than Florek, Fraser or Caron, hopping between the third and fourth lines.

For his grinding, energy role, Paille typically does a decent job. But it was still a down year for the fourth-line left winger who’s on the wrong side of 30. If the team decides to go in a new direction with the Merlot crew, he’ll likely be let go at the end of next season—he’s a UFA after 2014-15—in favor of a younger, cheaper forward who can penalty kill. Especially if Paille’s penalty killing remains at the level it was this past season.