Hello, folks. Kyle Clauss sent me this article recently and asked if we'd put it on the site for him. Considering the pulse-pounding action of the offseason, and that it's a decent article, I figured "why not" so here it is. Enjoy!

It’s a thought as dread-inducing as one’s own mortality for Bruins fans — the realization that there will come a day when Zdeno Chara will be absent from Boston’s blue line. No longer will he gobble up ice-time, guide along first-year players, maintain order amidst scrums, guzzle Coke on the bench and glide across the ice like some majestic Slovakian giraffe. Just before the 2013-14 NHL season adjourned for the Sochi Olympics, fans were treated to a rare glimpse of a post-Chara Bruins team while the big man represented his native Slovakia in the opening ceremonies. Though nothing happened in those two games to cause much panic, they weren’t terribly encouraging either. And as Detroit still struggles to find love after Lidstrom, the Bruins must do all they can to prepare for the hole a superhuman specimen leaves in his wake.

Providing Mike Milbury stays far away from the Bruins front office, Chara will remain under contract through the 2017-18 season, after which he will become an unrestricted free agent at the age of 41. Given the deterioration we have seen sneaking into the captain’s game as of late, we can expect this trajectory to culminate in his 2018 retirement.

As Chara’s career wanes to a close, Boston sports talk radio will yield on its most torpid days the question, "Will the Bruins retire Chara’s number?" While it already seems a forgone conclusion that Patrice Bergeron’s 37 will hang from the rafters of TD Garden, but what will become of Chara’s 33?

First things first, before any stats are called into question: Is there another No. 33 awaiting recognition? John Blum, Lyndon Byers, Anson Carter, Alain Cote, Matt DelGuidice, Benoit Hogue, Greg Johnston, Sheldon Kennedy, Craig MacDonald, Daniel Marois, Scott McLellan, Larry Melnyk, Jeff Norton, Krzysztof Oliwa, Scott Pellerin, Jim Stewart and Hannu Toivonen all donned the double-3’s, without a single Stanley Cup amongst them. So we can proceed on the supposition that Chara will be the sole 33 high above the ice without too much objection from the DelGuidice family.

The Bruins have retired 10 numbers in 90 years. They made history in 1934, when Lionel Hitchman, captain of the Cup-winning 1928-29 squad became the second athlete in all major North American sports to have his number retired, after the Toronto Maple Leafs retired Ace Bailey’s eight days prior. His teammate Eddie Shore, Bobby Orr, Dit Clapper, Phil Esposito, Cam Neely Johnny Bucyk, Milt Schmidt, Terry O’Reilly and Ray Bourque followed. In order to determine how Chara would fare in such company, I compiled total games played (regular and postseason) and total points (regular and postseason), as well as the percentages of their career GP and points that occurred while wearing the spoked B. This is especially helpful when considering Hitchman, Shore and Clapper due to the varying lengths of NHL seasons over the years. In addition, we have Cups won with Boston (sorry, Bourque), total NHL teams who have employed their services, hardware and team records, if any. Keep in mind, these are only Chara’s stats as of the 2013-14 season.

Clapper is the only man in Bruins history to play on three Stanley Cup teams, whose career straddles the Eddie Shore and Kraut Line eras. Only Esposito has played for more than two NHL teams in his career, with his time in Boston sandwiched between stints in two other Original Six franchises, Chicago and New York, respectively. In fact, Esposito played just under half of his career NHL games with the Bruins. This precedent is good news for Chara, who played for the Islanders and Senators before arriving in Boston in 2006.

Clapper, Schmidt and O’Reilly are the only three who played the entirety of their careers in Boston. Ironically, they are the most sparsely decorated, with only Schmidt capturing the Hart in the 1950-51 season. The remaining men either debuted elsewhere for a short time before coming to the Bruins for the rest of their careers (Hitchman, Bucyk, Neely) or rode into the sunset wearing another sweater after a lengthy tenure in Boston (Shore, Orr, Bourque). 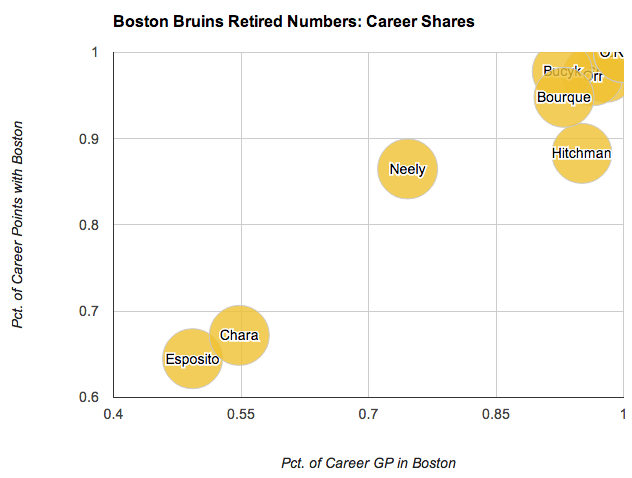 In an attempt to craft and visualize some sort of "Bruinness metric," I devised a bubble chart using the aforementioned percentages on either axis: Over the course of his four remaining season in Boston, Chara’s bubble will move right and upwards as he plays more games and scores more points — not quite eclipsing Neely, but certainly distancing himself from Esposito.

Of course, this is an imperfect measure because retired numbers do not necessarily belong to the most talented players. They could, but often times they reflect the zeitgeist of a franchise. Hell, the Minnesota Wild retired the number 1 for "the fans." Bourque’s number is retired in Colorado not for a long, storied career there, but because he brought the franchise its second Stanley Cup. Conversely, Esposito isn’t any less of a Bruin despite residing in the basement of the career shares graph. Esposito was arguably the greatest forward of the early seventies and a crucial cog in the high-powered offense that brought Boston two championships in ’70 and ’72.

Upon taking the above stats into consideration, along with the fact that neither the late 2000’s rebirth of the franchise nor the end of the 39-year championship drought would have been possible without Chara, the prospect of No. 33 hanging beside O’Reilly and Bourque seems all the more plausible.