Time to talk about your favorite Danish hockey player. Well, definitely mine.

The Coyotes, man. The Arizona Coyotes, mind you. I don't know that all that many Bruins fans have super strong feelings about most of the players on the Coyotes. We don't get to see them much, don't have a huge history of either animosity or friendly rivalry, there. Never fear, though, for I am here to have all those feelings for you!

The highest-ever-drafted Danish player in the NHL, Mikkel Boedker was selected number 8 overall in 2008 by the 'Yotes and has slowly made his way up to their top two lines. He had his best year to date in the 2013-2014 season, scoring 19 goals and 32 assists. And sometimes he has delightful shootout goals like this:

He also (at a game I was at, no less) scored the game-winning goal against the Pens, a move that probably endears him to quite a few B's fans:

He's also good buddies with the #2 player on the "Coyotes Players We Love" list, one Oliver Ekman-Larsson. 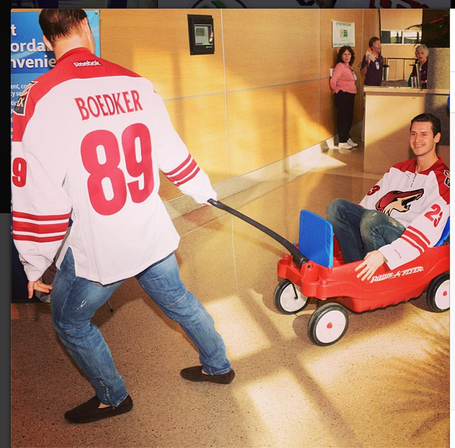 OEL is a delight, and one heck of a defenseman. His skating, is so, so pretty. Here he is being a jerk and scoring on Tuukka:

And, like many pro hockey players, both of these dudes get involved in the community, making hospital visits and the like: 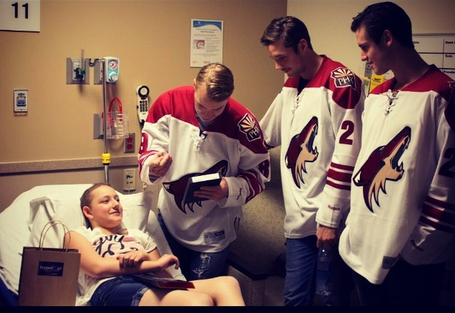 And to seal the deal, Boedker instagrammed this pic when Keith Yandle wore his Martin Richard jersey after the marathon bombing: 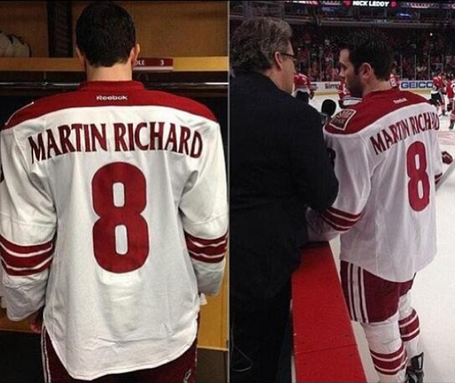 Between the two of them, Boedker and OEL offer more than enough to love in terms of talent, general good-guy-ness, and adorability to make them players for B's fans to get behind.

*Runner up player we love is obviously the above-mentioned Keith Yandle. Hometown boy, holder of a legit Boston accent = desired defenseman by many of the Boston faithful.

Player we love to hate

I'm gonna let you all in on a little secret. I'm not much of a hater. Live and let live, man, we are all just trying to get through this crazy world as fans of a freaking great game together, right? Riiiight.

Trying to keep with the spirit of the series, however, I have selected Shane Doan as the player we love to hate. Idk, it seems like a lot of folks who are fans of Western Conference teams hate him. Can't imagine why.

I'm not sure any Coyote player has really done enough to warrant the level of hate from Bruins fans that we have for players on other teams, but Doan seems to be the most likely candidate.