Players we love (and love to hate): San Jose Sharks

Share All sharing options for: Players we love (and love to hate): San Jose Sharks

Excluding the Bruins, I probably watch more Sharks games than any other team. While it means I find myself going to sleep way past my bedtime many nights, it also offers me ample opportunities to watch one of my absolute favorite players, Joe Thornton.

My affection for Thornton began with his days in Boston and carried over when he was traded. Over time, that affection has grown to encompass admiration as I've come to better understand his value through possession metrics. Despite not being much of a shooter (109th lowest shots per 60 minutes of all players with 5000 minutes since '07), Thornton always seemed to be at the forefront of Sharks offense, wrecking havoc on opponents.

In the Behind the Net Era ('07/'08 to present), San Jose is sixth in the percentage of goals scored (gf%) and third in unblocked shot attempts (both at 5v5). The man driving both of those? Jumbo.

He's 10th in gf%and 20th in percentage of unblocked shot attempts, or fenwick for (ff%). He's truly driving the bus at the Shark Tank. Take a look at his With or Without You (WOWY) numbers for his 10 most common teammates since '07. 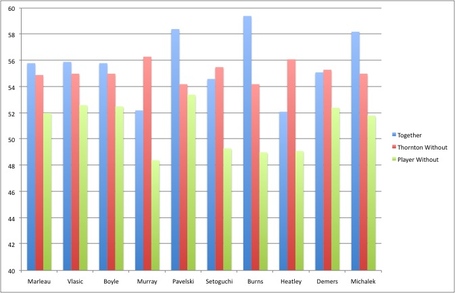 In fact, no one who's played more than 250 minutes with Thornton has posted better possession numbers without him on the ice than with him.

That sort of influence puts Thornton among the NHL's best and makes him a joy to watch. There are lots of players who make their team better, but few do it so dramatically as Thornton. Because he doesn't score 40 goals or put up a billion points, this impact seems under-appreciated and in this neck of the woods, he's somehow maligned.

Any opins out there on Joe Thornton's play this eve?

SJS has a 5-0 lead right now and Joe Thornton has a shot.

Habs were in town for a Game 7 when Joe Thornton, as #Bruins capt., blew off entire assembled media. Grounds to pull his 'C', I wrote.

It's almost as if KPD doesn't realize that since entering the league no one in hockey has more points than Joe Thornton and that he's 10th in points per game since that time. Joe Thornton is absolute treasure and he should be treated as such.

As much as I love Thornton for making the team better, I despise Mike Brown for his inverse impact. Seriously, it's like Bizarro Jumbo. And as much as I want to ignore players of his elk, the Sharks made it impossible by bringing him back this offseason. His contract signing was the precursor to the John Scott addition, which is like doubling down on badness. This made my decision a little difficult because I can't stand either. I choose Brown, though, because he came first.

I can't blame Brown or Scott for being in San Jose, that's Doug Wilson's doing. I suppose it's partially Dustin Brown's fault for injuring Tomas Hertl, but we saw how well this went for Buffalo, right?

What I can do is blame Brown for being a bad player and there's no way to make someone dislike you easier than making a team they enjoy watching worse. So yeah, I hate Mike Brown for making was an elite possession team last year inevitably worse and also for opening the door for John Scott.

OK everyone, tell me all the things you love about Joe Thornton. Or Tomas Hertl. Or Brent Burns. I love Tom, Dick and Hairy.