Share All sharing options for: Trade Talks: The Big Boychukski

Way out West there was a fella, fella I want to tell you about, fella by the name of Johnny Boychuk. At least, that was the handle his loving parents gave him. But he never had much use for it himself. This Boychuk, he was called "Rocket." Now, Rocket, that's a name no one would self-apply where I come from. But then, there was a lot about Rocket that didn't make a whole lot of sense to me.

That's why Johnny Boychuk has played his last game in a Bruins uniform.

Now this story I'm about to unfold took place starting back in 2009, just about the time of our conflict with Montreal and the Flyers. I only mention it 'cause sometimes there's a man—I won't say hero, 'cause what's a hero—but sometimes, there's a man. And I'm talking about The Rocket here.

(continue only if you're not into the whole brevity thing)

With the preseason starting next week, and RFAs Reilly Smith and Torey Krug not attending camp and team outings because they are still unsigned (not holding out, there's a difference), the Bruins need to clear cap space somehow to fill their 23-man roster. Peter Chiarelli (he fixes the cable) and crew only have $3.218mil in cap space left, and that's after Marc Savard's LTIR is applied. They don't have the necessary means for a necessary means for another pair of contracts. Multiple RFAs, limited money, trade-worthy assets, playing one side against the other, in bed with everybody—just fabulous stuff.

One plan would be to dump several defensemen. The Bruins have a long list of blue liners they deem to be "NHL ready". But between Zach Trotman, Kevan Miller, Matt Bartkowski, David Warsofsky, Joe Morrow, and Adam McQuaid, they have plenty of firepower to fill that final spot on the third pairing. About half of them are up next year as RFAs, the others a couple years out, and unless there's massive turnover on the Boston roster, the majority won't find a spot with the NHL club before their deals run out anyway.

But the other, and more commonly accepted plan (by nihilists, mostly), would be to find a single defenseman with an expired No-Trade Clause making upwards of $3mil in the final year of his deal, and get something for him before he hits the open market and signs a $5+mil contract, which is ample.

That's why Johnny Boychuk has played his last game in a Bruins uniform.

This is painful on two levels.

First being that Peter could've locked up Boychuk for a little longer, for arguably the same money. Peter is a good man, and thorough. But he treats objects like women, man. In February of 2012, Boychuk signed a 3-year extension for $10.08 million during what was (at the time) his best year with the Bruins. While extending a guy long term isn't necessarily a good thing, it is Chiarelli's MO. Andrew Ference, Dennis Seidenberg, Tyler Seguin, Milan Lucic, Patrice Bergeron, and the latest, David Krejci, are core players that were extended for several years before they hit free agency. The shortest term, aside from Boychuk's, was Ference's. But at the time, Ference was already 31 years old, and the extension was for an AAV of just $2.25mil.  Boychuk was only 28 when he signed his extension. Even if you were to give Boychuk two years of Ference's deal at the same overall price, you'd have him on a 5-year deal with the same exact AAV he has currently, but have him locked up through 2016-17 when he's only 33 going on 34.

Secondly, shipping out Johnny Boychuk as a cap move is

The team would intentionally take a step back defensively. Instead, they would opt to bank on several young defensemen, of which only a handful have a projected ceiling that Boychuk is already at. With Chara turning 38 next spring, do you really want to build for the future? Do you really want to risk losing your Creedence tapes? 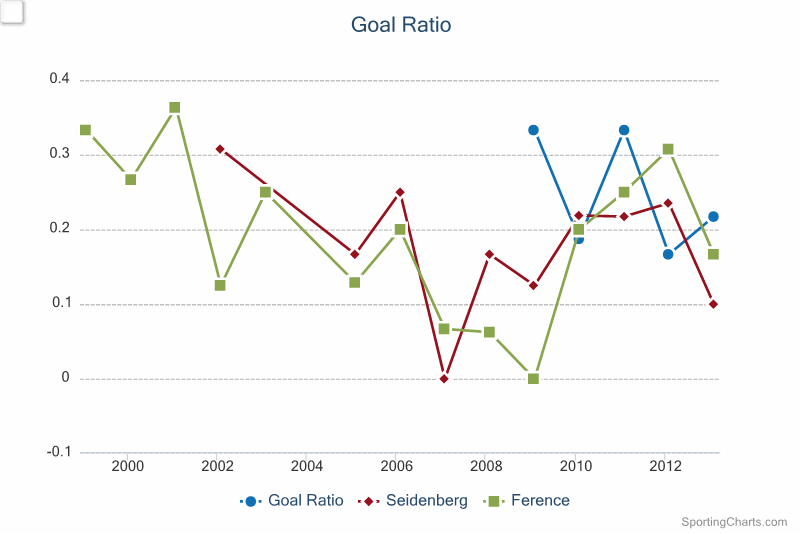 Boychuk proved last year with Seidenberg out that he's Top 2 caliber. He really tied the D together. Over the last three years, Johnny has the 2nd best iCorsi/60 numbers on the team, behind only Torey Krug. And defensively, he helped prohibit scoring chances more than he was given credit for. Lucic, Krejci, Bergeron, Marchand, Smith, Eriksson, Chara—all had better Corsi Against numbers skating with Boychuk than without him. Obviously, they are not golfers.

Even if Trotman turns into what Johnny Rocket is (or more) in 2-3 years, that's still 2-3 years your team is not at your best when your core players are in their prime. And there's no guarantee that'll happen anyway. Hamilton was a 1st-rounder, Krug was an undrafted gift, Morrow and Bart were acquired via trade. But what defenseman have the Bruins really drafted and developed the last few seasons? What stud has come out of Providence to be a solid (not "serviceable") blue liner since... Boychuk in 2009? Mark Stuart and Matt Hunwick were pre-Chiarelli. Everyone else has been a free agent or a trade. Why do we trust that Linus Arnesson will turn into something when Tommy Cross, Ryan Button, the vast majority of Bruins' D men drafted by Chiarelli haven't?

The god damn plane has crashed into the mountain! This aggression will not stand. Man.

There are a handful of teams that have the cap space & roster space to take on Boychuk for the final season of his current deal. While the big rumor was Edmonton, they have 23 men signed to their roster, and only $4.1mil in cap space. Teams with a roster spot, money to spend, and an In-N-Out Burger down the street include the Blue Jackets, New Jersey Devils, Carolina Hurricanes, and Dallas Stars. If the Bruins have to go this route, the least they could do is get a 1st round pick or high-value prospect that'll count towards the AHL salary. Shoosh. Wherever he ends up, I sure hope he makes the Finals.

This is what happens, Peter, when you GIVE. SEIDENBERG. FOUR YEARS.

This isn't an argument to sign Boychuk to an extension until he's 37. This isn't an argument saying to trade the farm. This isn't an argument to claim that Destroychuk is a Doughty or a Subban or a Suter. But a Top 4 with Chara, Dougie, Seidenberg, and Johnny? Fuckin' A, that's solid. And when you face Cup-cailber teams with multiple offensive lines, you want two lock-down pairings, not just one. I could do without McQuaid, and if need be Bartkowski to keep Boychuk for just this season. Krug and Miller would still be your 3rd pairing, and Wars or Trotman could be your scratch.

But it won't happen. Chia won't roll on shabbos. One year of one 4th defenseman isn't worth one year of two 6ths. Not in Peter's eyes. So all we can do is hope that Bartkowski and Seidenberg are solid enough to go up against a Jeff Carter & Dustin Brown line, a Brad Richards & Marian Hossa, an Alexander Semin and White Russian, or another dangerous 2nd line and hold their own.

Nevertheless... Johnny was a good hockey player, and a good man. He was one of us. He was a man who loved the outdoors, and hockey. And as a defenseman he explored the ice at TD Garden, from the top shelf of the oppositions' net, to the half-wall where he delivered so many hip checks, and... up to Pismo. He'll be traded, like so many young men of his generation, he'll be traded before his contract is up. And you'll take him, Peter. You'll take him as you took so many bright flowering young men like Joe Colborne, like Matt Hunwick, like Tyler Seguin. These young men gave it their all for 9 months out of the year. And so would Johnny. Johnny who loved hockey. And so, Johnathan Paul Boychuk, in accordance with what we think your wishes might well have been, we commit your final Stanley Cup of Chowder post to the bosom of our front page, which you... probably didn't know existed.