We Love Pernell Karl! (and You Should Too)

Give us all the Subbans. You can keep the rest, Montreal.

Share All sharing options for: We Love Pernell Karl! (and You Should Too)

Player We Love: (I don't care that he doesn't play on the PK) Subban

Across all major sports, there have been elite players that have faced off regularly against Boston sports teams and given us fits. Jeter for the Yankees. Manning for the Colts & Broncos. Kobe for the Lakers. And this generation, the Bruins' arch nemesis is once again a Canadien. Move over, Thomas Vanek. P.K. Subban is the newest (and best) Bruins killer. And god damnit, do we love him.

Montreal's best defenseman became their franchise defenseman over the summer, signing an 8-year, $72 million contract that'll pay him $9 million annually. At the end of the deal, he'll be turning 33, so he is signed through the absolute prime of his career. Even if he's being paid the most per year, I'd much rather pony up the cash per year if I get P.K. through 2022, as opposed to having Ryan Suter or Shea Weber on the books for $7.5+mil when they're 40 and 41 respectively. Plus, the salary hurts a lot less when you have Max Pacioretty's gift of a contract for the majority of Subban's term.

David Krejci is heralded for his playoff performance. Last postseason, Subban was 3rd among defensemen in points per game, behind on Brent Seabrook and Torey Krug. He took over the Bruins series with 7 points, including 4 goals. Like this one. This game-winner. And, of course, the best one...

Don't forget when he almost single-handedly knocked the Bruins out of the playoffs in 2011. He was the only reason Montreal was in overtime of Game 7, first by drawing the penalty and then rifling the goal past Tim Thomas. P.K. Subban is a baller, he wants the puck on this stick in crucial moments, he loves being in the spotlight, and he is nails in the playoffs. He is the epitome of the player you love to hate and hate to love. I'm certain I'll be cursing his name through the television during six regular season games and likely seven postseason games.

He also makes his teammates better. Aside from Brandon Prust, every single Canadien P.K. played more than 100 minutes alongside had a higher CF% with Subban on the ice. Several, substantially so. Desharnais by 6.4%, Pacioretty by 6.9%, Daniel Briere by 8.2%, Francis Bouillon by 9.2%, Travis Moen by 10.2%. And that's all just 5-on-5. 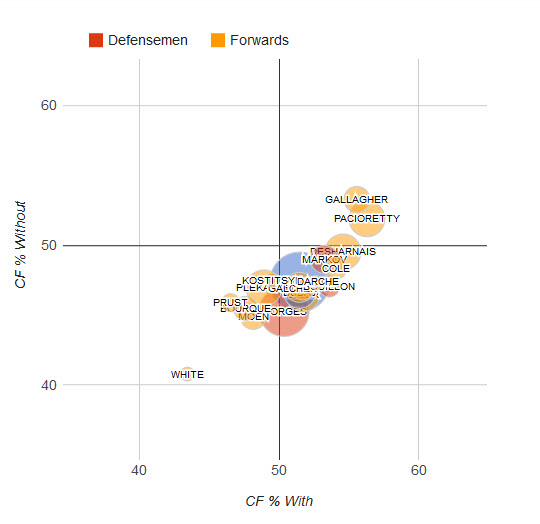 Not only is he a beast offensively, but he's not a shell of a defenseman in his own zone either. Subban plays the game like Johnny Boychuk--brutal hip checks and blistering slap shots. And his heady play allows for quick transitions out of the Montreal zone. His 5v5 FF% (Fenwick For) over the last four years is a .522, while his Opponents' FF% is at .499, resulting in more scoring chances he's in on than he's defending against. When that same start is Zone Start Adjusted, his FF% actually jumps to .527. And if you look at 5v5 GF% (Goals For) when the game is close? Subban's got a .569 over the last 3 seasons. When the game is close, Subban's team scores just under 57% of the goals while he's on the ice--for reference, Zdeno Chara is just a smidge better at .570, and Alex Pietrangelo is far and away the best at .601.

But Subban was ahead of Duncan Keith. Ahead of Brent Seabrook. Ahead of Drew Doughty, Erik Karlsson, and Niklas Kronwall. In a close game during the final minutes, P.K. Subban is one of the best defensemen to have on the ice, in the entire league. So enough with the "he only plays offense" argument. He's a better offensive player than he is defensively, but that doesn't mean he can't do both. Patrice Bergeron and Zdeno Chara are more beneficial when they're defensively focused, but they've both showed the skill to put the puck in the net. Subban is just the opposite.

How can you hate this face? 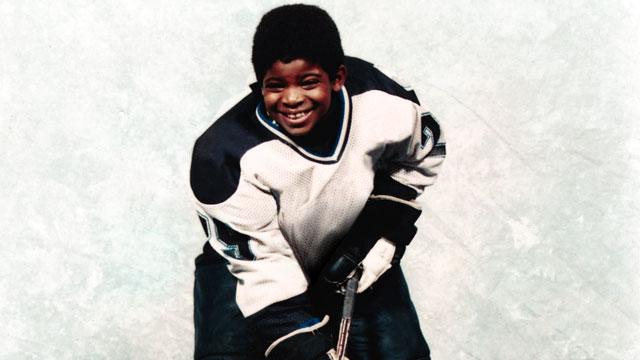 Nevertheless, while I love watching P.K. Subban glide up and down the ice, it's bittersweet because...

Player We Hate: Everyone Else

Max Pacioretty has skill, and plays--for the most part--a legit game. P.K. Subban gets under your skin, but he puts his money where his mouth is and can hurt you. Young players like Tokarski and Galchenyuk, and free agents like P.A. Parenteau that haven't been tainted by the filth floating around the locker room, you're cool. But the rest? My god. How do you root for a team like this?

Plekanec was just named an alternate captain staple (along with Markov; Subban and Pacioretty will split the 3rd A, home and away). This guy is your team leader? This guy is the leader in the locker room? This piece of crap, who actually has some talent but focuses too much on falling down when he's breathed on. No wonder why it's spread throughout the locker room so. damn. much. So much so that league's new embellishment rule? He was the main example.

3. The first example the NHL showed in its diving video was Tomas Plekanec’s head-snap in the Eastern Conference Final. The league wasn’t so sure about publicly naming those warned or fined, but the players pressed for it. Montreal’s centre is going to be closely watched at the start of the season. - Sportsnet.ca

It's pathetic, and it ruins the league. The worst part? Other teams need to stoop to Montreal's level. The Rangers weren't diving and flopping all over the ice in the first two rounds last year. But during the Montreal series, they had to try and draw penalties to keep equal. It infects other teams and other players. The first few years of his career, Brad Marchand was taking cheap shots, but he wasn't doing somersaults over Red Wings players. This is what you get when you play against a pathetic team like Montreal as much as you do.

The Canadiens don't win on talent. They have talent, that's not the issue. They have plenty of talent on their roster to make the Bruins fight for the division each and every year, now and going forward. But they don't win on talent. They win on being weasely, and take no shame in it. They win on drawing cheap penalties in the final minutes of a playoff game in which they already lead 3-0, and they're facing the opposing team's backup goaltender. But no, they don't dare win a hockey game even strength, and use actual skill. It's no wonder they had the most penalty minutes per game in the postseason last year, with 12 power play goals in only 17 games. For Howe's sake, they only scored 51 goals in the entire postseason, meaning that almost 1/4th of their scoring came on the man advantage and not even strength.