By most accounts, Ryan Spooner was explosive, entertaining, and one of the better Bruins on the ice last night. This makes Claude Julien's biting post-game comments all the more strange.

This could end up being a make-or-break year for Ryan Spooner's Bruin aspirations. There are forward spots that need to be filled. He's paid his dues in Providence: having been a near-point-per-game player for the past two seasons, he doesn't have much left to prove at the AHL level. He's shown flashes of being ready to contribute in the NHL.

He showed more of those flashes last night, scoring a goal early in the first, drawing a penalty, and generally being one of the more noticeable Bruins on the ice. After the game, Dave Goucher and Bob Beers cited Spooner as one of the best Bruins on the ice, noting his increased commitment to taking shots and getting to the net.

"It was nice to see him score that goal, but if you watch the game, he’s still a liability defensively. A guy gets a quality shot in the slot so he needs to keep working on that part of his game. It’s OK to see a guy’s game offensively and we love his game offensively, but at the same time, you can score one goal but if you give up two, you’re not helping your team."

-Claude Julien, as per Steve Conroy of the Boston Herald

Holy hell. Tell us how you really feel, Claude.

Full disclosure: Julien knows Spooner better than I do. Maybe this kind of stuff motivates Spooner, but Julien has never been a coach who loves to call out guys in the media. He usually sticks by his veterans, preferring to settle issues in the room.

But to rip on a young guy like this publicly seems to be an overreaction at best, and wildly unfair at worst.

Let's look at what Claude had to say:

"It was nice to see him score that goal."

Yes. Yes it was. In fact, there may be room for offensive production like that on the fourth line, considering that one goal represents 13% of the total goals scored in 82 games by last year's fourth-line center.

"A guy gets a quality shot in the slot so he needs to keep working on that part of his game." 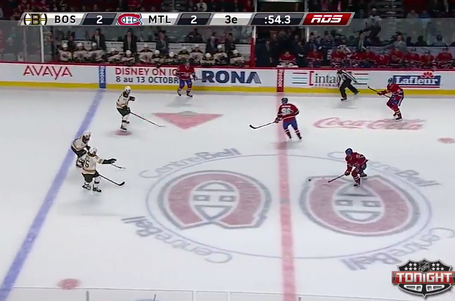 Again, Claude has a point here. But regardless, when you have two defensemen back, this shouldn't turn into a goal, especially a goal scored by a guy on the complete opposite side of the ice:

The ire that probably should've been placed partly on Chris Casto ended up heaped solely on Spooner.

"You can score one goal but if you give up two, you're not helping your team."

This is also a true statement, but it's so inaccurate and so unrelated that I have no idea why it's being uttered in a discussion about Spooner. Unless I have malfunctioning eyeballs, Spooner didn't give up two goals. Jiri Sekac's goal came with the Krejci line on the ice, and Christian Thomas' came on the power play with Spooner on the bench. Either Spooner stole Claude's lunch and is now being blamed for goals when he's on the bench, or Julien is making a completely irrelevant point just to further rip into Spooner.
---
In some cases, Spooner seems like he can't win. It may just be that the Bruins have high hopes for him so they want to make sure he keeps grinding away, but it seems like he checked off a lot of to-do list boxes last night.
"Ryan, you need to take the puck to the net more." Oh, like this?
"Ryan, we need you to shoot the puck more." *Leads the team with 5 SOG.*
"Ryan, please work on being better in the neutral zone." *Forces NZ turnover, scores.*
"Ryan, we need you to use your speed more." *Draws a holding penalty early.*
"Ryan, we need you to be more responsible with the puck." *Has one giveaway.*
Oh...well those things are all well and good, but you're still a "liability defensively!"
In checking last night's play-by-play, Spooner's name is mentioned 21 times:
There are certainly things (like not being in a passing lane, for example) that won't show up on a game sheet, but that certainly doesn't seem like the game of a defensive liability. Julien's comments show the continuation of a disconcerting trend regarding Spooner, where the coach always seems to think there's something wrong with his game. It's not quite tinfoil hat time, but it has seemed at times like the Bruins are almost looking for reasons as to why the kid isn't ready.
Is he perfect? Nope. And his defense could use work, sure. But right now, Spooner's best shot seems to be at fourth-line center. Is he going to be worse defensively than Campbell was? Not likely. And is Julien really prepared to go after a highly skilled offensive player because he's not quite where he needs to be defensively? Haven't we seen this movie before?
Spooner on the fourth line would represent the Bruins' move towards a "new" fourth line, one with skill and speed to burn. Can you imagine what a bottom line of Spooner, Paille and, say, Florek (or whoever, really) could have done against Montreal's fourth line plodders like Dale Weise and Travis Moen in the playoffs last year? Instead, the Bruins matched plod with plod and got beaten everywhere else.
The departure of Shawn Thornton was supposed to signify the beginning of that trend towards a "different" fourth line. However, Julien's comments represent a return towards his old habits of valuing dependability over all else. Maybe Gregory Campbell will allow fewer goals than Spooner would, but he almost certainly won't contribute as many on the offensive end. If Campbell prevents nine goals but Spooner scores 15, who's actually helping the team more? (Call that the Erik Karlsson Effect.)
Instead, we get quotes like this, where Julien continues to insist that the team needs to be "harder" up front. Goodbye, wonderful idea of a "New Fourth Line." We hardly knew ye.
Spooner does need to work on his defense. He needs to be a bit more responsible, use his speed to backcheck harder and take better angles on the puck. But on the fourth line, Julien could allow him to grow into that role by playing sheltered minutes against lesser competition. A plan like that seems to have limited downside and a huge potential for success. At the very least, Julien could give the media a vanilla quote, pull the kid aside post-game and say "nice game, Spoons. We'll keep working on that defense."
Instead, we get a goal-scoring, play-making, fast-skating, eye-catching kid publicly shamed as a "liability defensively" in a 3-2 PRESEASON loss where he was on the ice for one goal-against.
Keep working on that defense, Spoonman. Maybe one day, Claude won't be as afraid of skill.