A closer look at the 2016 Winter Classic Jersey

Going over the Bruins design, the unique features and additions, and the history behind it all.

Share All sharing options for: A closer look at the 2016 Winter Classic Jersey

The Winter Classic really feels like its on its way once the sweaters get released. And this year? No exception. The sweater you see these handsome rogues wearing is in fact what the Bruins will be wearing for New Year's Day in Foxborough, MA to take on the Canadiens.
While subtle, there is a LOT going on in this sweater that needs to be properly addressed to really show you what the Bruins were going for. Let's dig right in.

History behind the design:

The Boston Bruins were brought to New England by Vermont Grocery Tycoon Charles Adams in 1924, for the mind-bogglingly high price of 15,000 US Dollars. (It was 1924. You could buy a fleet of cars with that money in those days.) Their home opener was against the Montreal Maroons, which they won 2-1 over, and nearly missed playing because of a problem with the Ice Plant. In their inaugural season, they wore this:

More specifically, they wore this:

And their logo looked like this, because apparently in the 1920's nobody in Boston had ever seen a Bear (or lived to tell of it if they had), and art was something they used to describe cars and buildings: 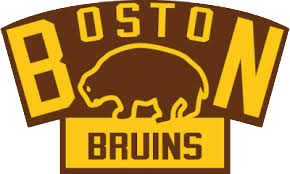 It was a simple, different look than what most of the league was using...Mostly because the nickname was actually ABOUT something, instead of a vague concept, color, or a plant.

...It uh, also should be known that, like many new teams after their inception, they finished dead last and only won six games while wearing these uniforms. - Brown changed to Black: This is the biggest, most obvious change made. Personally, I would've much preferred this in brown, as it makes the white numbers/letters seem a little less painfully obvious, and it would've let the particular configuration "gel" a little better.

- Numbers on the arms: The NHL didn't adopt this until the late 50's, so some liberties had to be taken in order to properly place it. Personally, I think in between the arm stripes is a perfect place for numbers to go and I wish more teams did it.

- Waist/Arm Stripes thickened: It was pretty clearly going to happen, as the original has designs that seem only big enough to adequately be seen by those in the lower bowl of the original Boston Garden. The Bruins have to make sure 70,000+ people see this, so the gold gets a little bigger.

- Arm Stripes Migrate down: While good for the time, it's clear the Bruins didn't exactly think the placement of the original arm-stripes as flattering. Moving it down makes it look a tad more professional, but having it off center from the elbow still gives it that implication of "old school".

- Updated logo: 1932, the People of Boston formally see their first bear. Thoroughly embarrassed, they strike the Bear from the front of the Bruins Sweater for 63 years and send generations of burgeoning artists to expensive academies, hoping they never make the same mistake again.

83 years later, designers create a logo that properly resembles a Bear using the same idea, proud that it finally looks how they want it to. Also, it's fuzzy. Which is something cool if you've ever gotten a huge sweater from your grandmother and it had something similar to it.

As you can see from the title image of this post, it definitely benefits from seeing it at a distance first. Think of all the crazy collars in the NHL for a minute. Some have words in them, some intentionally try and evoke a time period (even if their team was never ever part of them. Looking at you, Minnesota.), some intentionally try and modernize with slick striping...how few ever just have a simple, same color as the sweater crew neck? Just like the team used to have some 80 years ago.

Granted, it isn't EXACTLY like what they wore, as apparently the memo for hockey in ye olden times was a Turtleneck, but this design, as well as keeping it as intentionally simple and as "throwback-y" as possible, really sticks out for me, and I find it a very admirable decision on the NHL's/Bruins part. While yes, the letters are unadorned and sort of look odd against pure black as opposed to an old-style brown, but this here is the kind of stitching an old fella with huge glasses sitting in front of a sewing machine, painstakingly assuring that it will be grafted into the sweater forever would be putting out. The kind Miss Petrucelli on Clarke St. probably volunteered to do when she heard the team was coming to town in 1924. This is a small detail you probably won't ever notice unless you get one for yourself, but it is a nice touch on being committed to the "1924" look.

From a technical design standpoint, this is a perfectly solid and in some cases very well put-together sweater built to harken back to a time where the Bruins were just getting themselves together, and building their brand/rivalries with Montreal.

From a personal standpoint, I believe that using the 1924 uniform as a point of reference for the design meant that you were never really going to start and end up with a design that was anything other than spectacularly average. On top of that, I would've really enjoyed perhaps a more visually interesting updating on a classic look, like the 1926 sweater. But the little details for nerds like me that stare too long at these things in the NHL store are a real nice touch, and I like the way that this particular reimagining looks.

Would've liked to see it in Brown, however.