[Editor's note: This is a fanpost by farminvt, but we thought it was certainly interesting and informative to move to the main page. Feel free to post your own over on the right side!]

If you have watched a single Bruins game this year, you probably know that their penalty kill is simply not what it should be. As of this writing, they are sitting as the 10th worst team at 79.4%.
Side Note: holy cow, Calgary, 70%? My goodness. I guess a PDO of 80 while shorthanded will do that to you.
This year, however, everything you have known about the Bruins of recent years has been turned on its head. While the offense is having no trouble scoring, the defense, and especially the PK, have looked porous. While part of this can be attributed to pure attrition - Zdeno Chara, at the ripe old age of 38(!) is expected to still be the team's top shutdown guy, and this year it looks like age is finally catching up to him. Kevan Miller, a favorite of mine since he's a UVM alumnus, just isn't the player that Claude thinks he is. Right now, he's a 7th defensemen at best, and is playing the third most of all defensemen.
But the defense as a whole is a different topic for a different time. Today's topic is the penalty kill; and more specifically, the PK against the Nashville Predators on 12/7. The B's lost the game 3-2, thanks in big part to their poor play shorthanded.
A large portion of success on the PK comes from good positioning and active stick work: in some cases, however, all you need is a little Brad Marchand.
The positioning here just isn't something to be proud of. 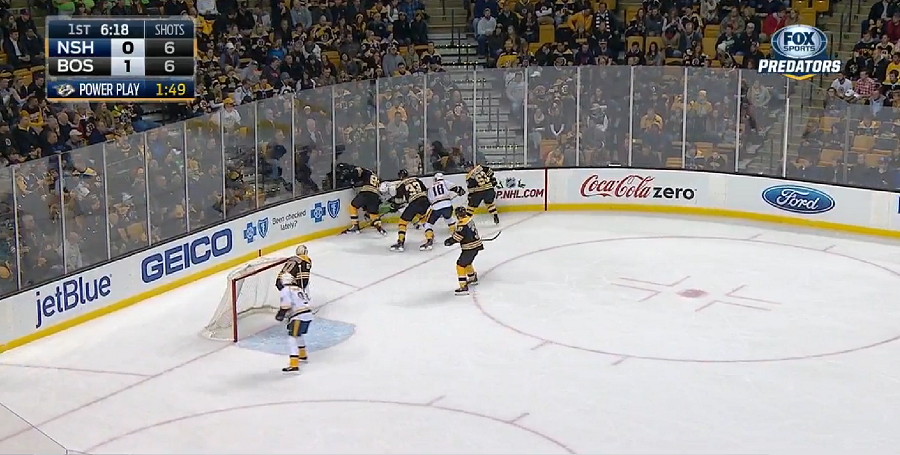 Four defensemen down low on two Nashville forwards. Ideally, in the above scenario, you would have Bergeron closer to the man standing by himself on the crease, and to have Marchand a few feet above the red line for any loose puck that Chara and K Miller would produce. If the puck were to get past the three of them and reach a Nashville defenseman on the point, it would create a quick 3 on 1, with Bergeron the only man in a reasonable position. In comes the Marchand magic. 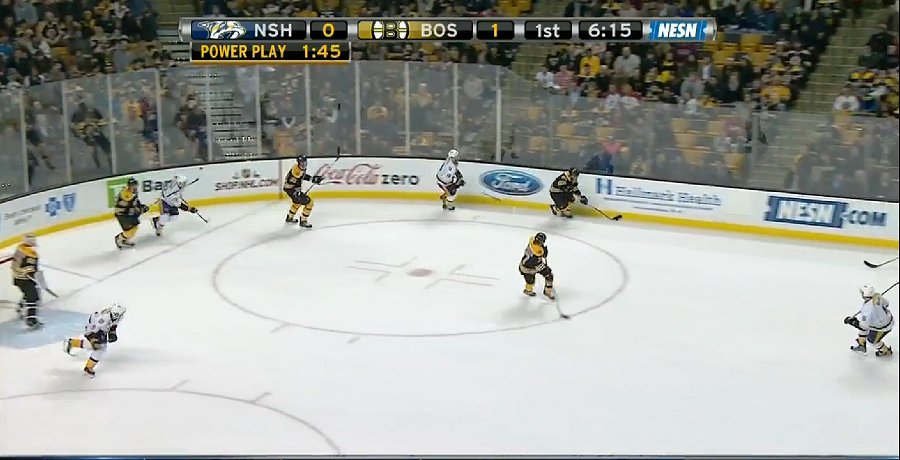 At this point, you can almost consider another 45 seconds of the powerplay to be written off; with Marchand's speed and puck control, I immediately knew what he was going to do in this scenario; race down the side boards, get into the offensive zone, and kill time by attempting to make his defenders look foolish. The play ended up with him like this: 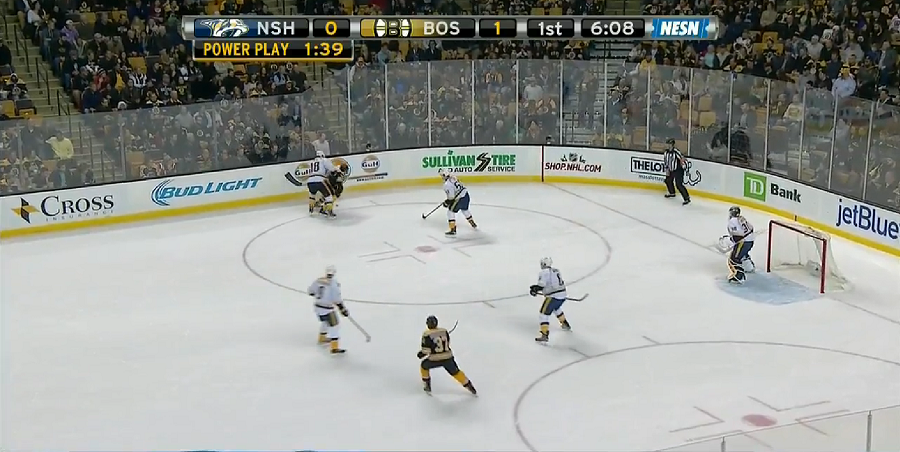 Cross-check to the back. 2 minutes, Nashville. Poor positioning bailed out by a great individual effort.
This first breakdown to hurt Boston comes near the end of first period; this is the third out of three Bruins penalties in the period. Chara got caught trying to literally pick Neal's brain, and clipped him in the face.
The resulting 4 on 3 penalty kill didn't go so well. Nashville starts the play low on the right circle with one man down low, two on the wings, and one up high. The bruins don't adjust accordingly, and stay in the traditional triangle with two men down low. The problem with that is it leaves a 3 on 2 down low, and Eriksson isn't low enough to cover the cross-ice pass.
*****
Eriksson should be down three feet lower here, covering the lane to Josi while also being the first man to step out to Weber had the puck gone there. McQuaid would have then bodied up on Neal in front, and Miller then would be responsible for Ribeiro.
Let's play hypothetical here for a second; if the Bruins were in the position described above, Ribeiro's best passing option would be to go short to Weber. Weber has a cannon, we all know this; but it's a straight-on shot from a long distance, something every goalie should save ten times out of ten. So say Weber doesn't shoot; Eriksson, positioned in the passing lane to Josi, would step out to Weber, leaving Josi as the open man. The same time Eriksson steps out to Weber, McQuaid would take a step off of Neal towards Josi, and Miller would come in from Ribeiro, staying in the passing lane. This type of rotation cuts off the cross-ice pass and keeps the play to the outer limits; again, all shots from there are much easier to save.
It's nice to dream, isn't it? Yea, I dream about being a millionaire playboy too. Well you better stop now, because dreams are meant to be crushed. 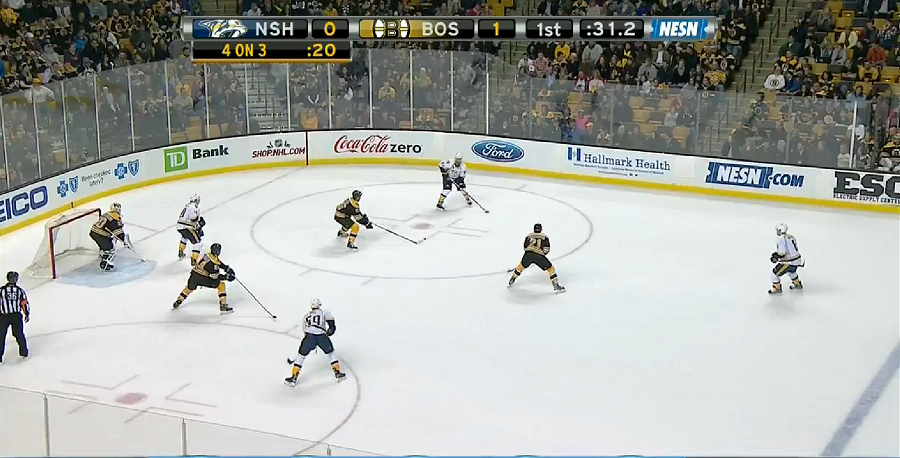 Now back to brutal reality; the cross-ice pass is exactly what Ribeiro sees, and that's where he puts it, hitting Josi at the top of the left circle; this shifts the defensive attention to the opposite side of the ice, which takes time. Now Josi,being the smarty pants that he is, immediately gives it back to Ribeiro before the Bruins defense can adjust yet again. 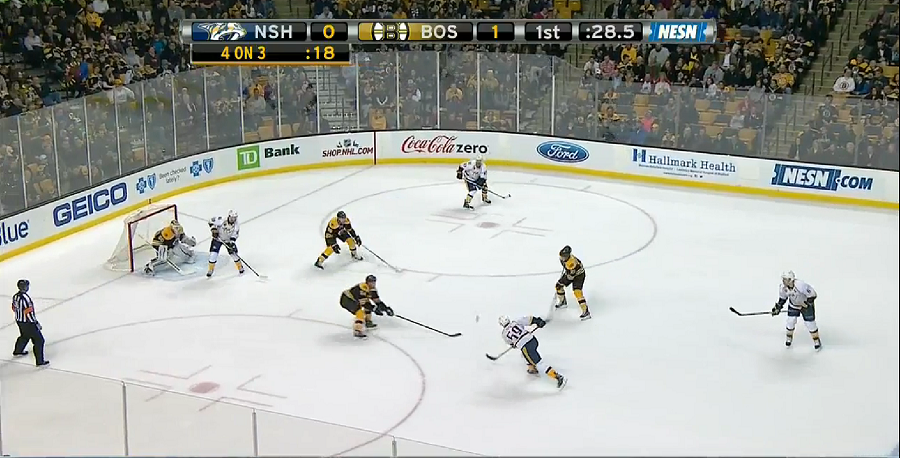 See McQuaid trying to both cover Josi and Neal? I smell something bad coming up, and it's not last night's chili.
Since Eriksson at the top didn't come down to cover Josi, the passing lane remained wide open, and it's now a 3 on 2. Ribeiro again quickly passesback to Josi, with Eriksson still in la-la land covering nobody.
McQuaid wisely tries to cover the closest man to the net, but Eriksson doesn't do the same, and gets caught flat on his feet. 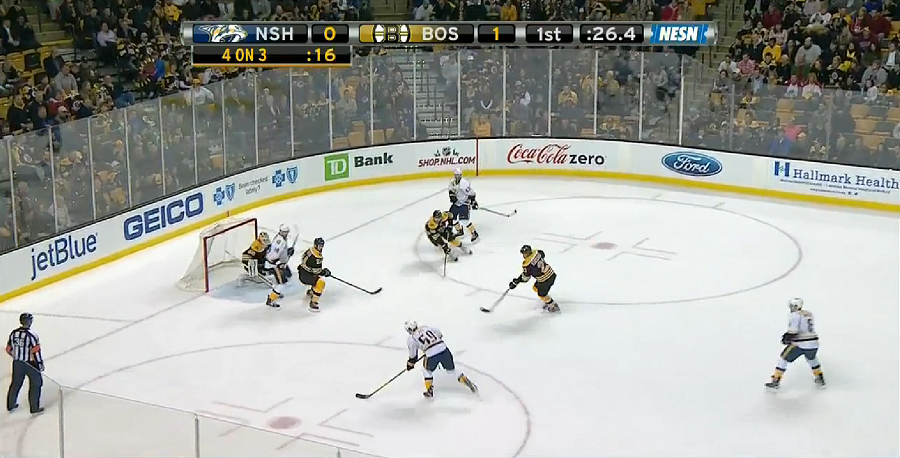 Since Ribeiro is so low in the zone, it forces Jonas Gustavsson to hug his left post and play deep in the net.
Gustavsson does his best to get a good push to the far post, but since he starts out so deep, he isn't able to challenge the shot enough and gets beat over the shoulder with a terrific shot.
This play could have been stymied had the Bruins been setup in the correct original positioning; instead, it results in an easy goal for Roman Josi. It wouldn't be the last time I yelled his name in vain.
*****
At least we didn't have to go through a minute and a half-plus of awful man-down defense for Nashville to score; it only took ten seconds. Let's illustrate the number of things wrong with this next photo. 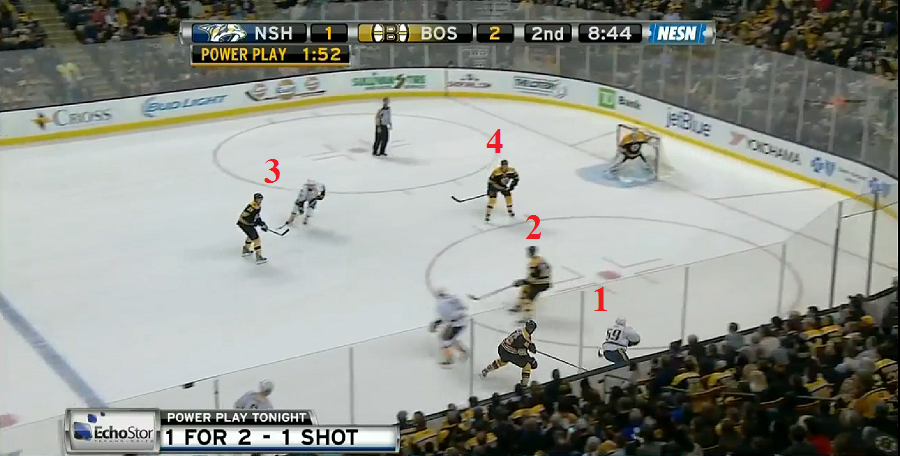 1) Krejci gets beat by Josi over the blue line. Not great, but, fixable.
2) Chara, Krejci's cover man, is such a poor skater at this point he has to make a long, sweeping turn in order to catch up to Josi. Hmm. Well, there's still more defenders back there, right?
3) Eriksson gets caught puck watching, and his man sneaks by him creating a passing option for Josi. Uh oh.
4) This results in McQuaid, hands on knees, getting caught in no-man's land. Does he clean up Krejci & Chara's mistakes and meet Josi at the net? Or does he cover Eriksson's ass and shut down the passing lane?
Let's investigate. 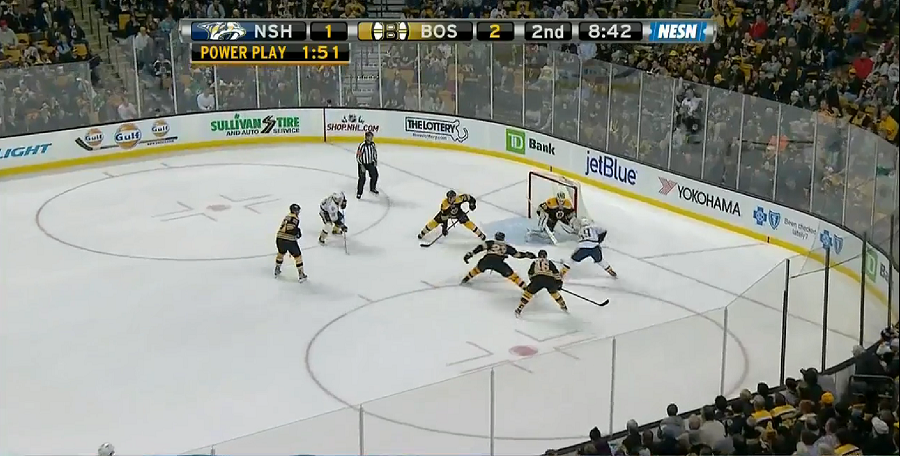 McQuad stays home to cover up the passing lane. OK, fair enough choice; I'd expect all 6'9", 256 lbs. of Zdeno Chara to be able to move his feet JUST A LITTLE BIT and cut off Josi's rush to the net. Like I said earlier; dreams are meant to be crushed, and this year, you can take all typically reasonable expectations and throw them down the shitter.
Chara doesn't feed enough coal into the 1700's steam-engine that now powers his legs, and gets beat badly, instead choosing to use his length to try and stop Josi. It doesn't work. 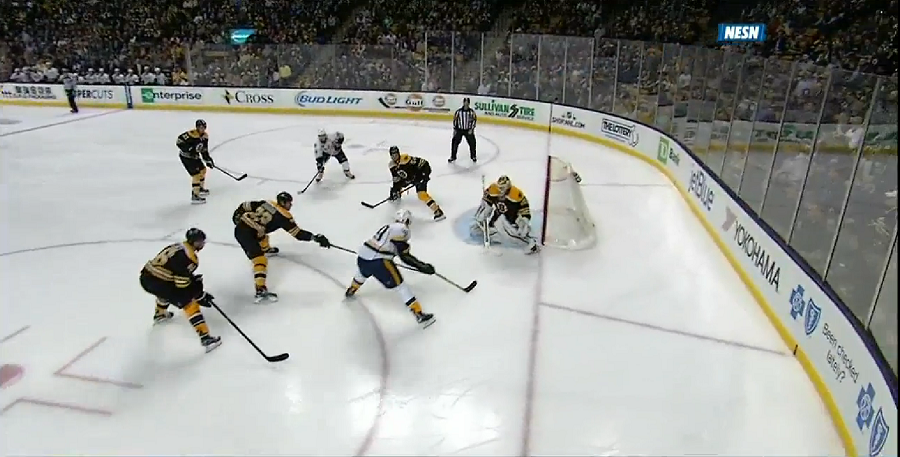 Josi sends visions of Bobby Orr running through our heads and sneaks the puck past Gustavsson. 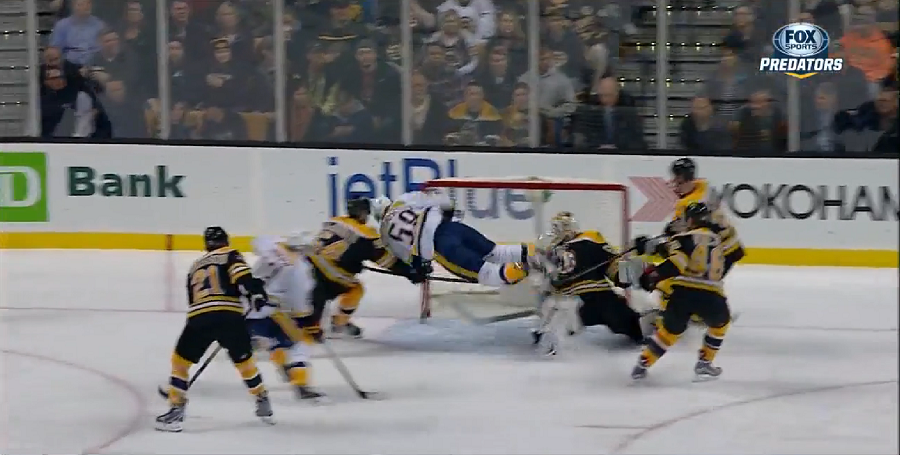 *****
About 5 minutes later, the Bruins were at it again. An interference against Marchand leads to another 5 on 4. This time it's not Josi sprinting through the defense; it's Filip Forsberg, one of the better young power forwards in the game. Yaay! But why, why was he able to go undeterred? Let's see! 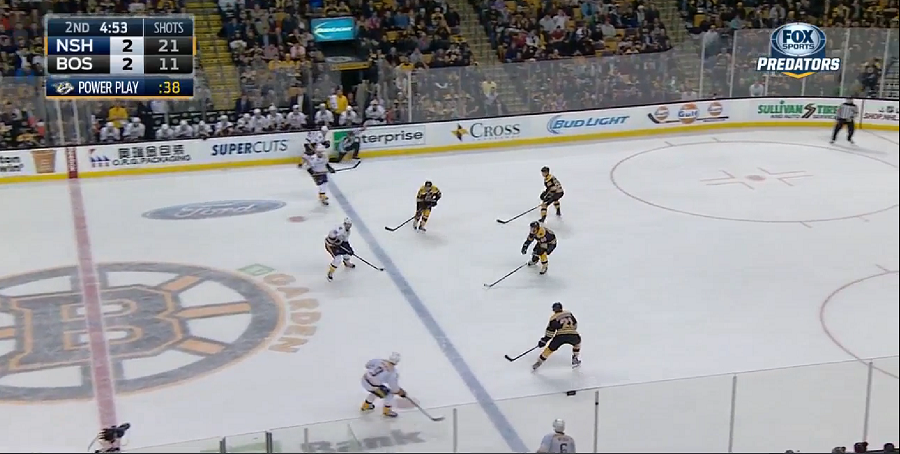 What's this? All defenders essentially in one layer? Eriksson is just turning his hips in the above frame while #9, Forsberg is at full speed. If this were correctly set up, Miller would have been at least 5 feet further back to chase down any dump-ins and provide that second layer of defense needed here. Give the Predators credit for smartly attacking this god-awful defensive formation. 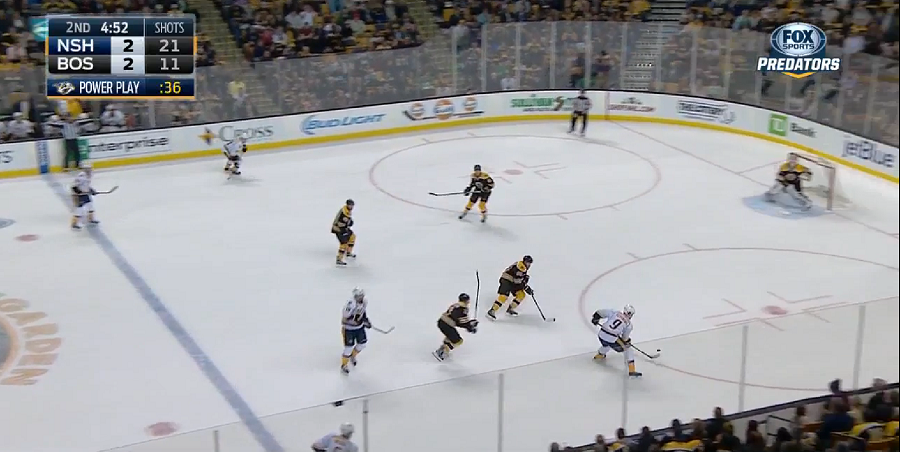 Forsberg receives a beautiful pass on his stick with a clear lane; if I were Gustavsson, I'd be requesting a new pair of underwear after this rush. Forsberg had everyone beat easily. Luckily, he couldn't handle the puck and doesn't get a shot off.
There will be more bad days like this to come. The Bruins as we once knew them are no longer; gone are the days of consistent 2-1 wins supported by brilliant, suffocating defensive play. The defensemen we have will be beaten and scored upon, and it's time to accept it.
But the team is still winning, despite the downturn in play. The above sceanrios are correctable, and Claude Julien is still a good coach (no matter what the internet commenters say). If Claude is able to eliminate these mistakes and keep the offense humming along (tied for 5th in goals for while 5 on 5!), then this team could make a little noise come playoff time.
All stats from war-on-ice.com. Thanks for reading. I will continue to post similar strategy-themed breakdowns of the Bruins on my website, Fertile Acres Farm.