The St. Patrick's Day Jersey is here. It's even worse than you think.

It's already in that list of increasingly bad things the NHL has done to me aesthetically and I feel personally violated by it.

Share All sharing options for: The St. Patrick's Day Jersey is here. It's even worse than you think.

That header is only a slight exaggeration of my feelings on this tacky garbage. And if you'll indulge me, I'd like to write about why these things are obnoxious.

Every single year the NHL trots out for the month of March (read: March = day after valentine's day) a green sweater for most of the american teams, because we here in the US (and Boston especially) like flaunting Irish-American heritage. There's the wearing of Green, the selling of cheap, undrinkable colored beer, and a lot of hi-larious stereotyping of Irish-Americans. Many of which performed BY Irish-Americans. I mean, The Charitable Irish Society of Boston wouldn't have started celebrating it in the US so many hundreds of years ago if they didn't think it would happen again. And much like any popular holiday, the NHL strives to capitalize on it.

Unfortunately, the sweaters they make for this particular occasion tend to be...bad. Really bad.

The first time they tried it, it was lazy. The regular RBK Edge practice sweater with a monochromatic logo on green. Teams that didn't wear green? Too bad. You're wearing green for warmups anyway. You're the Detroit Red Wings today? You're the Donegal Green Wings for warmups as far as we're concerned. It was distracting and silly, but it was small enough that it could easily be ignored. 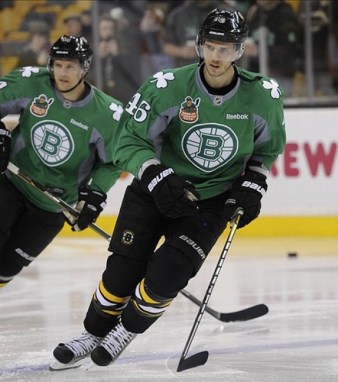 ...If a little jarring, since the players also didn't come out with matching socks. It was a nice gesture, sure. But it was supposed to be minor. Warmups, then you're gone.

Then it got annoying. People were dissuaded from buying these green goblins, and so the NHL decided to RATCHET UP THE IRISHNESS OF IT ALL by adding predetermined player names to them...just not their real ones. 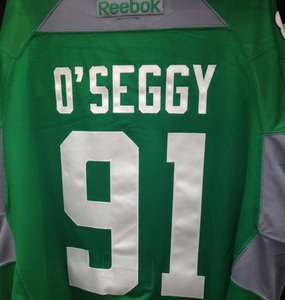 That's right. And this is one of the more creative ideas. Most of them were just lazy. Like O'Lucic, or O'Bergeron. Two names that could under no circumstances be misconstrued as irish in any possible way, unless there is a Lucic, Ireland I'm unaware of. This was derided as it should have been, but fans still kept buying them...for some reason.

With all it's mutations and changes, it's no surprise that after so long, their templated mess would receive some kind of upgrade.

Bright side? No more stupid names. Tragically, it's even worse than it was previously by getting something VERY wrong. Without further ado, here is your 2016 St.Patrick's day Bruins Jersey.

Where do I begin.

I could take about the fact that it's basically a Pens/Sens jersey in disguise, I could talk about the fact that the Winter Classic collar makes another appearance here. I could even make a point about the pointlessness of a team that wears Black and Gold to wear Green, even if they share a house with someone who does. The infuriating obsession in getting rid of waist and elbow stripes, a personal pet peeve of mine. But I would like to focus in on the holiday, and so my biggest problem, without any shadow of a doubt about this, is that there is a tartan pattern on a St Patricks hockey jersey.

Tartan. As in the kind of fabric pattern used for kilts. Popularly used by the scottish denote their heritage and clan line, usually with a different pattern depending on clan, and then made the official symbolic dress of scotland in the 1700's.

A feast popularly celebrating the life (and on the day of his death), of Saint Patrick.

The patron saint of Ireland who the holiday is remembrance of.

If you buy this with the intent of showing your irish pride you might as well just change your last name to MacDougall. You've been conned. You cheat yourself of real pride by showing your ignorance to your own (admittedly somewhat skewed) historical background. The NHL is getting lazier and lazier in it's attempts to keep the fan's engaged that they're finally at the point where they're just getting shit wrong. The point where it just added something vaguely relating to a Gaelic culture on a green sweater without checking whether or not it actually applied to the holiday and people they were reaching out to.

So yeah. If this appeals to you for...some reason...go ahead and get it. But remember that this goes towards nothing, this does not advance irish heritage (it doesn't even fucking RESEMBLE irish heritage other than the wearing of green.), and is a cash grab that has just gotten progressively worse.

If you wanna actually support ireland or irish pride, go buy an IIHA pin or an Irish national jersey and frame it. Sure, it's IIHF as hell and looks kinda cheap and goofy, but it's definitely more appropriate to the holiday.