Brad Marchand unamused at praise of Crosby hit on Deslauriers

Why did Crosby get praise and laughs for a low-bridge when Brad Marchand was handed a suspension?

Share All sharing options for: Brad Marchand unamused at praise of Crosby hit on Deslauriers

Sunday afternoon during the Penguins game, Sidney Crosby went low on Nicolas Deslauriers. He saw Deslauriers coming and instead of turning away from the hit, the best player in the game low-bridged and flipped his opponent.

Sometimes when you try to hit Sidney Crosby, you get flipped... pic.twitter.com/4ioiunATZE

Hmm. Where have we seen this sort of hit before?

Marchand on Crosby hit: "that cost me a lot of money, that hit."

Marchand even RT'd the hit. 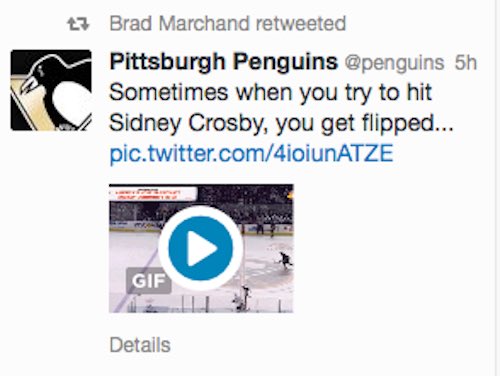 It's worth speculating: if Deslauriers had been hurt on the Crosby play (which, thankfully, he wasn't) would that play have been looked at? Why is injury a seeming requirement in addressing dangerous plays like this one? Why is the best player in the game resorting to ducking a hit in a way that, close to the boards, could end up injuring the opposing player, and why is an NHL team praising said dangerous hit?

You keep doin' you, NHL.