Having to serve as a replacement Chris Kelly is a surprisingly difficult job. Joonas Kemppainen was one of the gaggle of forwards this season to learn that the hard way.

Share All sharing options for: Joonas Kemppainen had to be Chris Kelly for half of 2015-2016, and it didn't work.

A transplant from the Liiga champion Oulun Kärpät, it seemed as if Kemppainen's role as a player was in a limited one from the onset. As the heir apparent to what would end up being the Neo/Nu/Post Merlot Line center,  he had only two real goals as the 4th line guy: Hit some dudes if they have the puck, maybe score a few goals, keep the puck out of your own end, don't get scored on. The bare minimum of what a hockey player should be doing, y'know? And he did a pretty good job of that. His minutes weren't spectacular, but he managed to play with enough

And then Chris Kelly got hurt. And that started to show some ugly problems with who'd be taking his penalty killing time.

Kemppainen brought even worse than next to nothing in terms of offensive skillset or strength, going 16 games without registering a point in any variety. He played a very typical "Fourth liner in the NHL on a team struggling for results". Overly narrow? Sure. But it fits. He was a large body that threw hits and occasionally did something pretty cool (though often with teammates far and above his caliber.)

But otherwise, his performance was just not there, as it had a fairly large pair of skates to fill. His PK time was generally unimpressive, and it pointed out a major weakness that having a player like Chris Kelly gave you the ability to mask: If you don't have forwards who can suppress shots consistently, then you're almost certainly going to have a bad PK. The Bruins PK throughout the first half of the year, as I'm sure you recall in your night terrors, was horrific to balance out the PP being lights out for a consistent amount of time. Unfortunately for Kemp, he'd never get that chance to improve himself, as he was injured in a game against the Predators in December, and about two months later, the organization decided that enough was enough, and middling returns weren't going to cut it anymore: Joonas was sent to Providence, where he remained for the rest of the season. 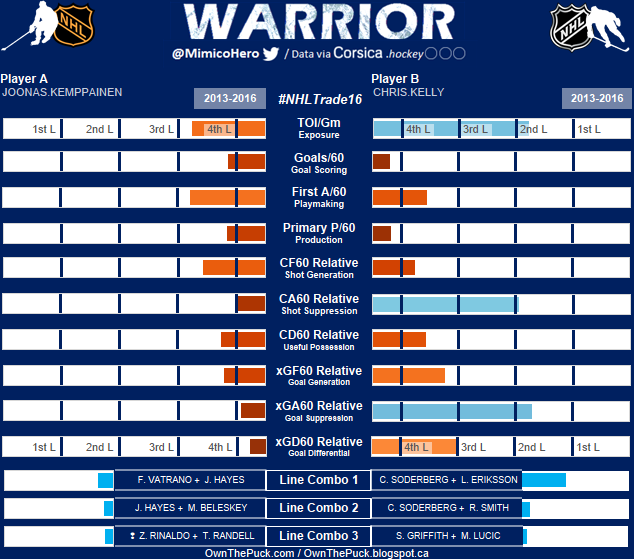 Look, I know maybe it isn't fair to compare these two guys, but it more or less describes the point that Kelly's body of work was best suited to the role he was in early on, and he played it admirably. And of course, it shows the problem that comes with trying to come up with a player that maybe hasn't, or just isn't capable, of filling specific roles like Penalty Killer and defensive forward.

Kemp had a rough season, and will now be let off into the blue, where hopefully he can either find another NHL team looking for depth forwards on a budget, or returns to Kärpät. Either way, I wish him the best.