Joe Morrow had a rough half-season, but there are signs of hope

Not exactly a banner year for the Boston defense in general, but Morrow among others had the ugly problem of having to make up for...that traed. Is he finished? Or does he need another look?

Share All sharing options for: Joe Morrow had a rough half-season, but there are signs of hope

Joe Morrow is an oft-forgotten piece of the Dallas Stars-Boston Bruins blockbuster trade which sent Tyler Seguin off to go become a star and Loui Eriksson to become a very impressive player in his own right...that he already kind of was.

Now, he stands a very good chance of being the only piece of that trade that ends up staying past two years. Maybe.

A Perennial prospect in the AHL, Morrow did well in small relief efforts for the Bruins in the last couple of years, playing inoffensively in 15 games last year. Now, with 33 games more under his belt, it seemed pretty obvious that Joe Morrow still needs a little time to develop at the NHL level...at least on the defensive side of his game. Offensively, 7 points for a player who was largely in relief of other, more injured defenders and in a near constantly shuffling lineup meant that he was going to have ups and downs in his game as time progressed. When it came to offensive talent, he showed a lot of it, even if he wasn't netting goals.

Tragically for Morrow, it showed more often than not that his awareness was still a level down in the AHL, where sometimes he could be caught behind the net or ignoring players plopped in front of the goalie. If nothing else, one could say he was definitely taking the defensive lessons of the veterans of this team to heart.

In fact, it was likely a large reason why he failed and received as bad a grade as he did, as he regularly shared ice-time with Adam McQuaid and Dennis Seidenberg. A pair of players you'll remember, who had worse grades than he did. It's like being stuck with the two hyper-stoners in a class for a group project. You're gonna try hard, but your two new friends are now part of the deal for you, and now stand a very good chance of pulling your grade into a watery grave. And if they aren't properly managed, they very easily might do so.

It's not entirely all gloom and doom for the young lad, though. As his ability to generate chances and good skating made him a versatile assist maker in some of his better games. More positives to come in the fancystats column. 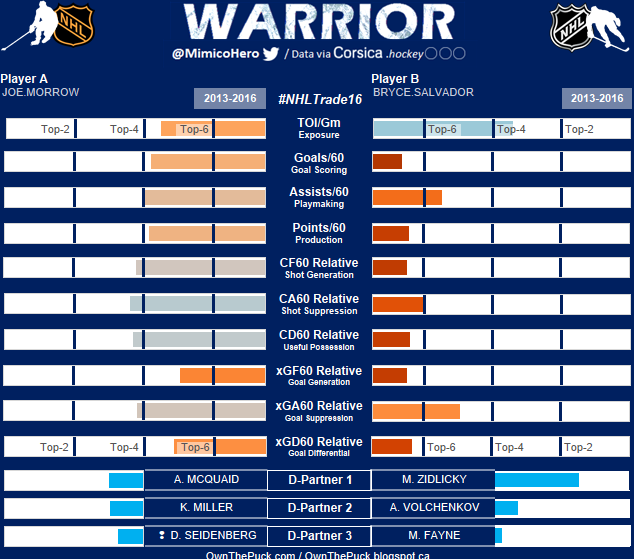 Small sample size? Probably. But this D+ might be a steeply curved grade considering his partners over the year. And while it does look like Morrow shouldn't feel the need to crack into the top pairing anytime soon, his solid performance does give the impression that as a depth defenseman, he could very easily thrive. He just needs better partners on defense, maybe someone a little less...Kevan Miller-y.

As an RFA, the Bruins have a little flexibility with Morrow. Do they continue the experiment with a show-me deal? Or do they use that money somewhere else with players that deserve the money more?

Personally? I think there's potential here. He got exposed, and was exposed hard with suck-ass defense partners, but there is a kernal of a serviceable defenseman in there somewhere, just begging to be let out. But then again, they do need to sign other blueliners...

Whatever the case, I do hope he stays. He has a good shot, and good offensive instincts. Time will hopefully iron out his defensive problems...as well as better linemates.