Landon Ferraro's 2016 was serviceable, but streaky

Consistency counts for something around here, friend.

Share All sharing options for: Landon Ferraro's 2016 was serviceable, but streaky

Landon Ferraro joined the Bruins fairly early on in the season from the Detroit system, and had largely had negligible experience as a player at the NHL Level. As a Bruin, he did show quite a bit of flair on offense, even in his limited role of roughly ten minutes a night. His skillset definitely made him an interesting weapon on the Nu-Merlot Line, and occasionally he got to do really cool stuff like this:

And while that was all fine and good, there were some issues.

Namely, after March, he stopped doing that.

In fact, Ferraro would go several months in between points. And while yes, he took limited time, he still showed plenty of skill that could in some way suggest he might be one of the better 4th liners the Bruins iced. And in a way, he was. Of all the players that ended up on the 4th line this year, Ferraro walked away with the most points out of any of them.

But when he wasn't doing that, he wasn't really contributing much defensively, Ferraro often found on bad breaks, and taking powerplay time he wasn't entirely ready for. One sort of cruel example is this:

Listless, trying to cover two players at once, overcommitting to both, and as a result nobody receives any challenge. Goal against.

In that performance, he only played six minutes.

But was it all his fault? Hardly. for most of the year his linemates were Max Talbot and Zac Rinaldo. Nobody looks good with either of those two.

In many ways it was rather frustrating, because you could see him doing okay with linemates like Noel Acciari, but even then it was still not enough for the poor guy to continue to show those flashes of offensive talent he occasionally would bust out. His inconsistency, as well as who he was surrounded with, was his downfall this year. 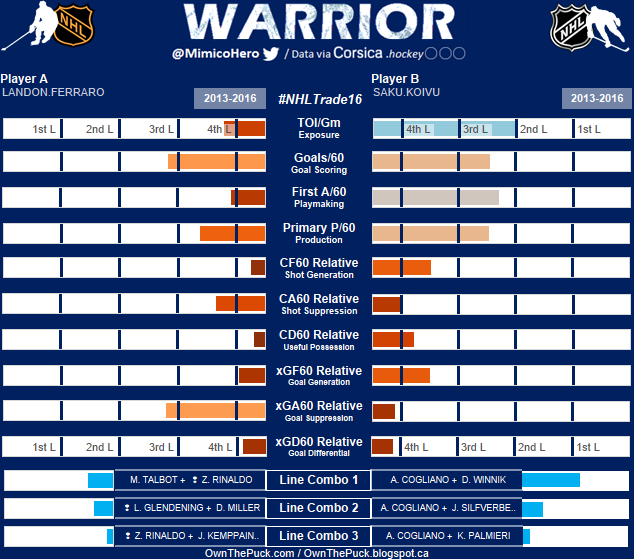 Landon's possession numbers weren't all that great this year, but I choose to believe having two players who got grades worse than he did, one SO much worse, that he might've been pulled down a bit.

Landon's an RFA, and so the Bruins have flexibility with the guy. If they decided his time was better spent in Providence in exchange for a player like...say...Seth Griffith? Then I wouldn't mind him returning on a 600k deal. If the Bruins still need someone on their 4th line and all prospects they want to keep could fit into the 3rd? Keep him on the same money as far as I'm concerned. If not, I wish the son of Ray Ferraro luck in the future.

It was kinda great to see that happen. Thanks for this great memory, Ferraro family.

They sound so weirdly alike. It's messing with me.