Zac Rinaldo's End of Season Report Card: He was terrible

Our grading system goes from least to highest, so get ready for some venom.

Share All sharing options for: Zac Rinaldo's End of Season Report Card: He was terrible

NHL Statline: More than he deserved.

It is frequent that analysts, some bloggers, and randos on twitter bring up "grit" as a major factor in what makes a hockey player succeed.

Grit, as it turns out, is kind of a blanket term for a bunch of different things that fans, scouts, and GMs like about hockey players.

It can also kind of be bad for you. A certain Leafs vlogger once wondered out loud in front of a microphone whether or not people, and NHL General Managers in particular confuse "toughness", which is kind of what the first four sentences of the last paragraph describes, and "grit", which is typically in the last two sentences when people bring it up.

From the get go, pretty much nobody thought Zac Rinaldo to the Bruins made sense. At all. The team had just come out and said "Young and Fast" for their fourth liners and meant it, shipping out the entire Merlot line. However in replacing them, "Young and Fast" apparently meant "The single biggest argument for automatic 10 game suspensions for headshots" for a goddamn third round pick. A pick so high some people couldn't possibly believe Don Sweeney had been swindled out of for one of the single most penalized NHL players in the entire league. A player decidedly unremorseful about some of the disgraceful bullshit he's committed. And he was rewarded with...well...Zac Rinaldo performing in a Bruins jersey.

Which is to say, not well. Even if he kind of looked like an NHLer in terms of explosive speed early on, he was still objectively a bad player. He had many of the same talents in shooting that a player like Daniel Paille was often maligned for, and for about a meager portion of the points. And this is considered a down year for him, as the year before he was able to double his point total from this year.

Maybe you're saying he's more of a tough guy role. Get Penalty minutes? That sort of thing? Well, He certainly had plenty. In fact, he led the team in fights this year with six! Unfortunately, according to HockeyFights.com, it appears he couldn't even get THAT right consistently enough. From all his six fights, he comes out with a record of:

Not exactly an impressive record for a supposed tough guy. It is in these moments where I wish Matt Beleskey had picked a couple more so he could pull that vaunted title away from him.

But that only accounts for about a half hour of his 83 minutes of penalty time. All others were the kind of penalty Zac Rinaldo was used to getting: Dumb minors, REALLY dumb misconducts, or something in between. And if he wasn't doing that, he was making the team around him worse. 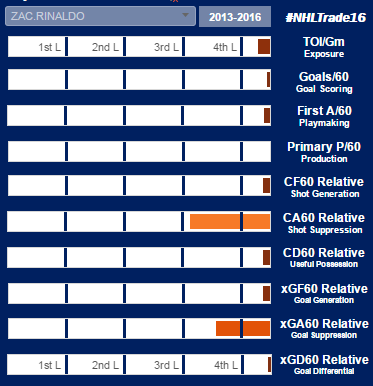 LOOK AT THIS. Even with players that have shit CA60 sometimes you can find a silver lining in xGA60 that seems to fly in the face of his garbage possession. And yet it's just barely at 4th liner levels. barely. Most of his fancy stats in fact, struggled over the past three years to get above even replacement level.

And then...this happened. Zac Rinaldo finally did what Zac Rinaldo does best: He got suspended after a boneheaded headshot.

And then, just when it couldn't have been worse, it happened again. Zac Rinaldo gets suspended by the AHL for a boneheaded headshot. THREE DAYS LATER.

This would be comical if it didn't involve another person getting seriously hurt.  In fact, one could make the convincing argument that Zac Rinaldo is comedic. As game after game of him playing like he does led to more bad things happening on the ice, I became convinced that Zac Rinaldo is a mean-spirited parody of what people think Bruins hockey is like.

This is what the coworker who only heard the phrase "Big Bad Bruins" and hasn't watched a game since Cam Neely was a regular thinks the Bruins are like. This is what the douche spilling beer on you and harassing women and children three rows up thinks the Bruins are like. This is what NHL fans around the league categorize the Boston Bruins as. Zac Rinaldo exemplifies it all by playing stupid, reckless, goon shit that has the potential to shorten careers and disadvantages the team he plays for, all under the guise of trying to bring "grit".

A kind of player cut from the same grimy cloth as this:

When people say they want to see dirty players out of the league, more often than not they're thinking of a player like Zac Rinaldo. Zac Rinaldo has made a point of never proving he has ever deserved more than the hard end of the NHL rulebook thrown at him and a lifetime ban. He has never ever shown himself to be any more than a moronic skidmark that keeps showing fans who just want a game to finish with a winner and a loser that we have a long way to go.

Zac Rinaldo did not just meet his worst expectations as a Boston Bruin, he exceeded them with flying colors. If he has to continue being paid at the 850k he's being paid until 2018, then he'd better be spending it in the AHL where he can do no further damage.

The team could at least do us the favor to keep him there.