John-Michael Liles had a tough job to come into, and did the best he could with his limited time

It's tough pulling a hopeless wreck out of the ocean, But JML gave it his all.

Share All sharing options for: John-Michael Liles had a tough job to come into, and did the best he could with his limited time

Think about the first hopeless job you ever did for an employer.

The first real mess you were thrown into as an employee of anything: A software firm, a fishing boat, a Burger King, a TV station...any of them at all.

Say that the people in charge really want things to be run in a certain way and it's stifling the workflow. Or that some of the work is going really well, but the stuff that's supposed to prop up said work to mean something keeps failing in a consistent manner. A lot. More than you want to admit it might. Imagine that this could lead to a real moment of embarrassment in the company and the boss' first year on the job. It's bewildering, maddening even. People are being productive and there's all sorts of cool things happening but in the end it's coming up for nothing! It'd drive you crazy.

Now imagine that, instead of being on that crazy ride from the beginning, you came into it almost at the end. Imagine the bewildering thought of having to be the stabilizing force within it on a time crunch. Hopefully to make it better before the whole year is wasted.

This is kind of what John-Michael Liles had to come into as a member of the Boston Bruins.

JML is the very model of a good "low event" defensive player. A kind of simple, no nonsense, not many flairs to his game type of guy that keeps the puck out of your end. He is a perfect #3 - #4 defenseman if you're a team in a crunch...which the Bruins were. And this year was more of the same for JML as he began his time as a Carolina Hurricane, being good at what he was doing in Carolina (though certainly not in any danger of competing for the playoffs in the Red, Black and White) before being moved at the very end of the Trade Deadline to the Boston Bruins. The Indianapolis native never scored a goal in the Black and Gold, but was not expected to. What he did do was give a temporary moment of reprieve when the Bruins defense was just not capable of keeping itself together.

Tragically, his efforts would've been much better appreciated had he come in much earlier than the deadline.

Really, the only knock against anything he did this year was more that the Bruins didn't get a hold of him sooner. And JML played his ass off for the Bruins once he got the chance. His no nonsense style immediately gelled with the gaping, bleeding chasm in the earth that the Bruins defense was, and truly gave them the best opportunity that they had all year of being playoff bound. But 17 games is a very small number, and there's no telling how much better off the Bruins would have been had they gotten him around...say...Christmas.

Maybe we'd still be talking about the playoffs? Who knows now.

With being a UFA and plenty of teams needing Top 4 (not necessarily Top 2) defensemen, one will wonder where a capable player like John-Michael Liles will go next.

Hopefully? Nowhere but here in Boston. 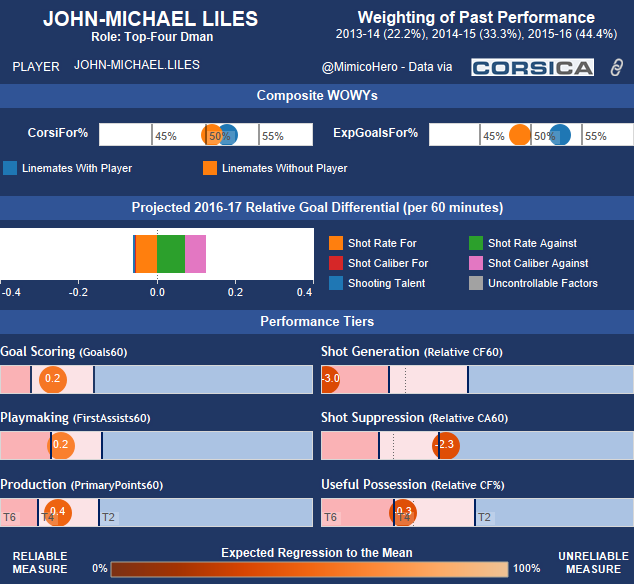 That my friends, is a defensive defenseman's defensive defenseman. Doesn't take a whole lot of shots, but goddamn does he suppress them and suppress them with gusto. And as an added bonus, you can see that like Chara, he was able to drag whoever his defense partner was out of the hell they often found themselves in on terms of possessing the puck. Just a good player playing good, solid hockey.

Here's hoping we can get that back.