* Lots of points ** Was Good at hockey *** Okay he did punch a lot of dudes in the face that was kinda cool.

I admit I was unfair to Matt Beleskey when he was first signed as a Bruin.

I looked at his accumulated work over his six years as a Duck and it really felt like year six was his single best year as a player...well...ever. All other seasons he hadn't been able to crack higher than 25 points, which isn't bad really, just not...lots of money and term good. How could he possibly make up for that? Surely this was just the peak, right?

Well, I'm happy to inform you that first, the crow for this evening was lightly seasoned with a garlic and herb mix and smoked on apple logs.

Second, he was able to keep his pace as a 2nd line winger and have yet again one of the best years of his career, having five more points than he did the year before as a member of the Ducks.

Mostly he did it by sheer tenacity on the puck. Oh, and a deceptively fantastic shot that would, in times of scoring, completely upend goaltenders' expectations.

And he got to do this a lot as a Bruin, blow past defenders, fiercely challenge for the puck and win, and more often than not getting a good shot off. He was also a fantastic assister when he played with a young Ryan Spooner, who benefitted greatly from having a player willing to jam up the middle of the slot or pass to him at the right moment.

Of course, NESN didn't want to use the term "tenacious" (because who wants to be mentioned in the same breath as someone like Jack Black, amirite?) and so they decided to invent the identity of "Blue Collar" for Matt Beleskey's play.

Because nothing says Blue Collar like a dude from Barrie, Ontario, right?

Real hickville, that place. I bet that place doesn't even have six Tim Hortons a block.

But in terms of the more "Blue Collar" aspect of his game, he did end up fighting a lot of dudes, tying for second on the team with Adam McQuaid. He was certainly not averse to taking on guys bigger than him...

And he definitely wasn't afraid to show players objectively worse than him who was boss.

I could watch this particular fight for hours.

But I assume the reason they kept using the moniker was his tendency to go to the slot with a lot of guys pushing and shoving him around. A skill that netted him quite a few goals. A nice touch for his doggedness in trying to be productive. 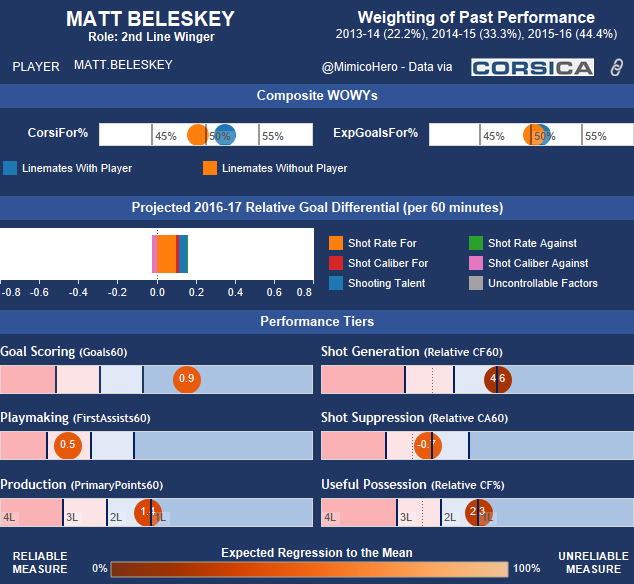 Long story short from the graph here: Matt Beleskey shot the puck a lot, did his part on defense, and made his teammates better. Exactly what's expected of a winger in his position.

Here's hoping he has an even better year next year as we march on with more Matt Beleskey in his prime!