The grade is appropriate for a player who has shown little growth on the main roster.

I think, more than anything else, Kevan Miller is frustrating.

A stay at home defenseman should be, in most cases, a "low event" player. Which is to say a safe, boring pick to have on the ice at any time. And not all players have to be the next Kevin Shattenkirk or Drew Doughty, here's plenty of good that can come of a player who can just hold down the fort. And in a way? It's incredibly admirable that they do those thankless jobs.

But more than anything else, they have to show awareness on the ice. The ability to read play and where the puck is going, and where it might go. And during the playoff series in which he first debuted some time ago, Killer seemed to be just fine in his role as a near bottom pairing player who played Low Event hockey. He didn't light the world up, but he was fine where he was, an okay 3rd pairing guy, somewhat like Adam McQuaid in a way, but slightly younger.

Kevan proceeded into the unshortened '13-'14 season and was painfully overexposed from the get-go. Without the safety net of Jonny Boychuk limiting his minutes, Miller's play ended up negatively turning him into the player that we all have an opinion on today. Slow on the puck, overcompensating on the forecheck, overcommitting to a certain player, or just plain old looking lost on the ice, but he has been a heavy hitter, he also had some pretty good fights, and has had genuinely good games! On his best day he looked perfectly serviceable, on his worst day? he was far and away the worst player on the ice.

What's worse, that awareness I described at the beginning just...didn't happen. It didn't develop like it should've. Oh sure, he'd be fine on some shifts, but then there were times like autopilot kicked in, any developing awareness just seemed to die, and he'd panic and do something like...well...

So yeah. His year was, by and large, more of the same. Bad play, underdeveloped senses, and that's what's frustrating about him. There was promise in this young guy, a rough hewn product and...nothing came of it. He just stayed rough.

From the fancy stats side of things, it seems like Miller's game fits firmly in a bottom pairing setup and only there. His overall possession gives us this impression when generating shots and re and even a stupidly high xGA60 seems to make him look slightly...better? However, in his role of the top four, he more often than not got overrun by players that are far and above his particular skill set. As he was shuffled down the lineup, this was less of a problem, but he still struggled with high pressure situations and occasionally, and bafflingly for him, played the puck passively.

I will be perfectly honest and say that most of his fancy stats seem to contradict the idea of him maybe not playing quite as badly as we'd hoped, if not contradict his performance outright and players much worse than him have a similar xGA60. 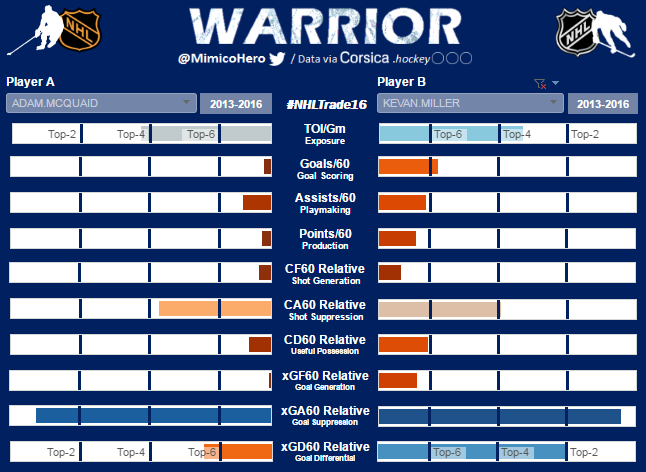 Yeah, we'll get to that particular player soon but trust me, the variance seems....too difficult to call.

K.Miller is now an unrestricted free agent, and I really don't know if the Bruins will sign him again. He's been in the organization long enough for people to get an opinion of him, he's regularly savaged by the media for being the defensemen in some of the more embarrassing to watch goals against, and has largely not proven himself capable of the minutes he's asked to perform.

If they do decide to resign, I really hope it's for cheap.

If they don't, well then...sorry Kev.