Torey Krug, I'm gonna be perfectly honest with you bud.

You're more than just an offensive defenseman. Way more. And I'm beginning to suspect you always have been.

Now obviously some of you are looking at that total on the statline and going "What, this bum who couldn't shoot straight? How could he possibly have gotten so many points? Why is he the guy of all people who gets the best grade of all the defensemen this year?"

The answer is that he was the most reliable, second most utilized, and in some extreme cases...

Their salvation from some truly disastrous play by the Boston Bruins defense. Including the goaltenders.

Krug was one of a select few group of players that got to say they played 80 games or more this season for the Bruins, almost an entire season's worth of play and was vital to near every minute of it. While Zdeno Chara once again logged insane minutes while trying to keep the cohesion of the Bruins defense together, Krug was right behind him at a respectable average of 21 minutes a night. And unlike Chara, he didn't have an enterprising young rookie who could actually handle the pressure of top line minutes,

Krug had to drag players like Kevan Miller, Dennis Seidenberg, and Adam McQuaid back into respectable play. A job individual players would have trouble pulling together a positive result, and yet he was able to regularly get positive results out of them. A herculean task, to be sure. An "undersized" player with a ton of speed managed to avoid being slaughtered by some of the bigger dogs in the NHL forwards pool, and was often a lynchpin in getting and keeping the puck inside the offensive zone. And when the puck wasn't there, he was one of the more useful tools in the Bruins offense in getting it back there by playing good, smart defense.

He did however, suffer this season in that he had a shot percentage so weirdly low you'd look at all the others and go "how the hell did that happen?" in fact, let's take a look at the past few years of Torey Krug for confirmation:

That is a drop off that is literally too bad to be believed. And when the season wrapped up and it turns out he'd been playing for most of the year with a shoulder injury, one can assume this was a colossally bad streak of bad luck for the young lad...

...where it didn't even matter because Torey Krug managed, with a basically useless shoulder, to end the year with 40 assists. He is the highest point-getter on the entire team on defense and he did with his best asset, his shot, severely limited by injury. But that didn't mean his scoring touch was gone, he just had to conserve it otherwise there was a good chance his shoulder would be hurt worse.

And with a shot that automatic it's a wonder anyone doubts him.

He's also shown a willingness to mix it up with anyone who slights him or his teammates, even if it means the player is bigger than he is. Krug's courage in the face of overwhelming odds (and the fact he probably went after Stewart whilst hurting) is something commendable in and of itself.

As an RFA, and facing major surgery for most of the summer (unfortunately leaving him out of the WHOC USA picture, which is franky bullshit given how badly Brian Burke screwed that up, but that's a whole other story...), the Bruins can theoretically take their time with a player like him, but they absolutely should not let him go. A player like Krug is theoretically easy to come by in terms of skillset, but with a player whose slowly begun to take a foothold into the leadership structure of the team (viewers of Behind the B will notice that he's become the go-to guy for talking to rookies and other such duties), he absolutely should be the next person signed, even if it's a deal backloaded to the gills.

After all, he's the best option we have after Chara right now. 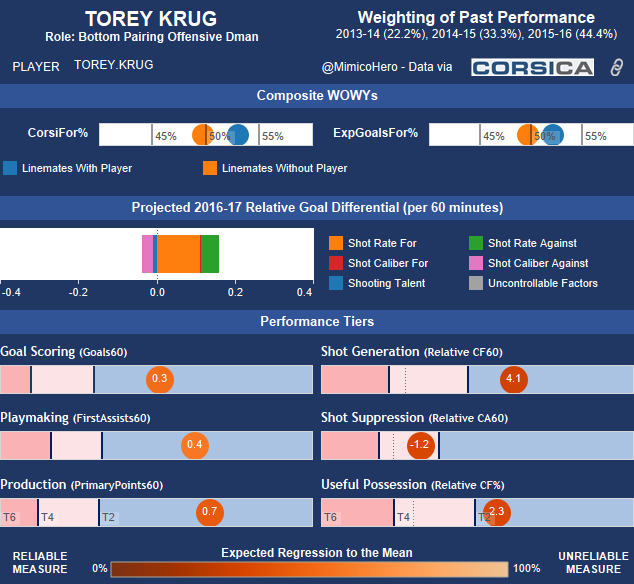 Translated: Torey Krug had no business playing on the bottom pairing, and yet he played it regardless to fantastic results. In spite of everything, he still managed to stay above water, and play to the level expected of him.

Torey Krug is a solid top 4 player who has deserved his spot since his debut on the Bruins roster some time ago. He has soldiered on through quite a lot in his time, through doubt on his size, his strength, and his overall impact on the team. Now with the team more unsure than ever on defense, and looking distressingly...large and slow and bad, they need a guy like him to even the odds for Boston.

Like a real american hero. Coming in to turn the tide.