Brad Marchand's best year: A reminder of what's to come.

If you got mad at him at all this season, he got you. And that's just how you want him to be.

Share All sharing options for: Brad Marchand's best year: A reminder of what's to come.

Let's get one thing real clear and outta the way before we do anything else.

Brad Marchand gets under a lot of people's skin.

He can't help it, really. It's part of the way he plays. He jabs, he chirps, he jaws...he even gives a little mock affection in the face of intimidation. Cuz he sure as hell isn't scared of you.

Yes, Brad Marchand is fantastic at the role of pest.

Which makes it all the more better that he had the best year of his career here in Boston. And the hockey media and blogosphere that demonized him as a "rat" must now accept him as "Top NHL Goal scorer". And what a goal scorer he looked like.

Throughout the year, there was nothing to me more satisfying than watching hockey writers who normally had nothing but backhanded compliments for Brad have to twist their joweled grimaces into praise as he dominated the score sheet.

On the Bruins, nobody except his center could possibly hope to catch up with him in points. Only five names in the entire league had more goals than he did. And he looked to be in the upper echelon of NHL goal scoring in terms of hands, moves, and decision making. Everything Brad Marchand did reeked of a player playing like the superstar he knew he was. His shot was a goal scorer's. His hands were goal scorer's. Hell, even his attitude could pass for one! And it made players (and writers) furious.

His play making skill also came into its own this year, Brad managed to see some fantastic plays to the end in terms of a good assist. He could see the game and the scoring chance well ahead of the play, and often sacrificed the body (due to being target #1 for easily rattled defensemen/forwards) to make these plays happen. There was practically nothing he wasn't doing to the best of his ability. And his ability was fantastic.

His greatest asset, as i'm sure you know, is mind games. Skill is always important, and Marchand has plenty of that. Mental fortitude on the other hand, can be critical, and in moments of the game where you need it most, it cannot falter. That's where Marchand shone; he played fans, players, and even coaches like a goddamn fiddle this year. Marchand's goal of being in your head more than any other player you could think of was often a smashing success for him by being who he is. And if any player was mad by anything Brad Marchand did or said over the past year or so, he instantly knew how to get around them. The battle was already won. By forcing them to commit to a check by just really wanting to smash him or baiting a player playing close enough to him that you could throw checks on him so that he could take off towards the goaltender. And this year, he made you pay dearly for being suckered into it.

And when you're scoring more than anybody else on the team, you get to do some weird scorin', such as when he knocked a puck in straight out of the air like a baseball...

Or when he had the fastest goal in Bruins history at 8 seconds...

Or a number of other great things he got to do like get back on the short-handed goals leaderboard for the team and go over 13 games with a point in some area or another. Marchand could do it all and practically did no wrong this year.

Marchand's contract is up next year, being paid around 4.5 million right now for a player who could easily be playing for almost double that money for all he's done for the organization. One can only hope that Don realizes this and sees to it that he receives the money he deserves. 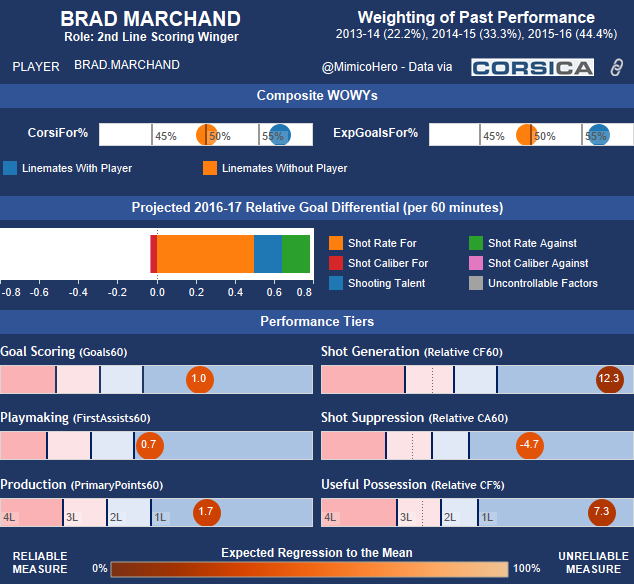 Marchand was/is a tour de force in terms of possession. He makes his teammates SO better while he's on the ice, he produces possession at the level of some of the more elite players in the game, and he even scores to the level of someone who should be playing like this. His powerhouse offensive and defensive punch made him extremely difficult for other teams to play against (both because of skill and...well...you know.)

Marchand played like a man possessed (of the puck) this year, and now that he's smashed through the thirty goal barrier, and doesn't look like he'll be shifting lines anytime soon, expect more of this NHL.

Be afraid. Or mad, since you seem to love being that at him.

Just remember that's what he wants.