Happy August! I spent my freetime this weekend playing the closed beta for NHL 17. Here are my thoughts!

Before we do anything else, here's what the Beta allowed me to play with:

Here's what the beta didn't let me try:

With that out of the way, let's go through some thoughts I had whilst playing this beta and my final assessment.

This isn't a detriment of the game, but it was of my own. I like to think that my internet is actually pretty good, as far as I know anyway.

As it turns out, my internet acts like an earthquake meter deep in the San Andreas Fault in the presence of heavy online stuff. And it really shouldn't, as my room is not very far away from my modem. As such, it made EASHL a nightmare to play, and in some modes I was just flat out not allowed to play because "The data wouldn't go" or something like that. AKA: My ping was now somewhere between Seabrook, NH and the moon. And when I was playing, there were basically four modes of me playing the game:

1) Being an active contributor

2) A screenshot of the game

3) Me re-entering this plane of existence and henceforth trying to make up for having not done a whole lot as the game tries to catch up with itself.

4) "You have lost connection to your opponent"

2. The system of how you decide how you play in EASHL is both genius and intuitive to you.

In my limited time playing online, I came to learn something about EASHL players:

They desperately need to learn how to play defense.

I personally, wanted to play offense and drive play, but I also felt like the team seemed to do better with me just passing the puck and driving possession, and more importantly getting back on D, which was a major problem for almost everyone playing.

So I decided to play as a "two way forward". My personal favorite option, as it fits what kind of players I like in hockey; those who can contribute more than just goals and more than just kicking the puck out of the zone. The happy middle.

Turns out, I'm a better player in that regard than I thought. I even ended up being better in some games than the actual defensemen because of how greedy players can get.

Some players are great scorers, with much better hand-eye than I could ever assume, and those were the guys I'd end up getting points off of. they'd usually pick "Hitting Sniper" so that they wouldn't get destroyed. The system really allows you to see where your priorities are as a player, and caters to it.

3. Playing the (VERY few) game modes made me worse at NHL 16 and I'm glad it did

The game has put a level of control and finesse into how players actually skate in the NHL. Players start and stop much faster and more intuitively than previously (as befitting professionals who've played this sport all their lives) and turning is a more automatic, simple thing.

Then, after some time, I turned over to NHL 16, where I promptly shat the bed with two finnish teams you've never heard of. (What? I watch 82 games of Boston. Sometimes you wanna branch out). I thought I was losing something between the two, and decided to just practice a bit. Turns out, I was right about something. NHL 16 is under the impression you're skating on a layer of ice and butter and all hockey players slip and slide very loosely, it's a quite airy game with a "float-y" control scheme. You're expected to keep momentum, otherwise you're gonna make some awkward decisions. And it makes the game very out of your hands if you happen to screw up. Your players will not do the right thing.

NHL 17 on the other hand, recognizes that these players at all difficulties and sizes have done this bullcrap before and can play this game better than middle schoolers. A player who was previously impossible to control in NHL 16 is now a perfectly serviceable winger in 17. The preciseness of control gives you a lot of power over how you play, and how you put your gameplan forward.

4. Goaltending has been overhauled in a great way.

As previously mentioned in the pre-beta article, goaltending in NHL 16 has an ugly tendency to be very "limbs" based. And because of it, every goalie is beatable and unbeatable at the same time. From the elitest of the elites to the bums, there is no such thing as a "consistency" modifier for them because the way the game tracked the puck as the goaltender made no sense.

Now? No easy moves or breakaways are gonna save you. You are required to look for weaknesses in a goalie based on how good they are, how they react to your movements, and whether or not they can make certain saves. Mostly because instead of flailing a limb, they actually track you like a real goaltender would. They move with the ebb and flow of who has and who doesn't have the puck. You can be in a breakaway all you'd like, but if you don't get creative with your movement that goalie will just hunt your movement down and make an easy save. Hell, you might even have to pass off to a player better than you if you're gonna try and go for a goal. It makes for an interesting experience playing against.

5. Monster Factory should do something with this game once it comes out.

You can make some real fun lookin' dudes in this game.

The magic of having a system with a near perfect running graphics card (for console, anyway) is that you can make some real monsters with it. The amount of faces they give you to accomplish this goal means you'll likely spend tons of time just wondering what the design meeting for these faces looked like.

The system of creating a player returns in full as it did in previous NHL games with about 300 plus faces of different shapes, colors, and sizes that you can make as pretty (or as unpretty) as you'd like it to. The attributes you're used to in assigning how good this player is make a return and are more responsive (AKA they don't take forever to put into place) than ever before. Goalie creation is improved to the point that even the stance the goalie is customizable. The way the player plays the position is now so up to you the very way they physically stand is on your call. And that's wonderful. I made three characters in this way; Thudson Redwood, a titanically large standup goalie from Nebraska. Jaako Paanjaako, a tiny but fast butterfly goalie, and a terrible excuse of a goaltender by the name of Tweedle Dipshit.

I encourage you to guess which is which.

The options also extend to the team and arena creator, which are treated as one in the same. To which I can only show you the first try of making something look good: 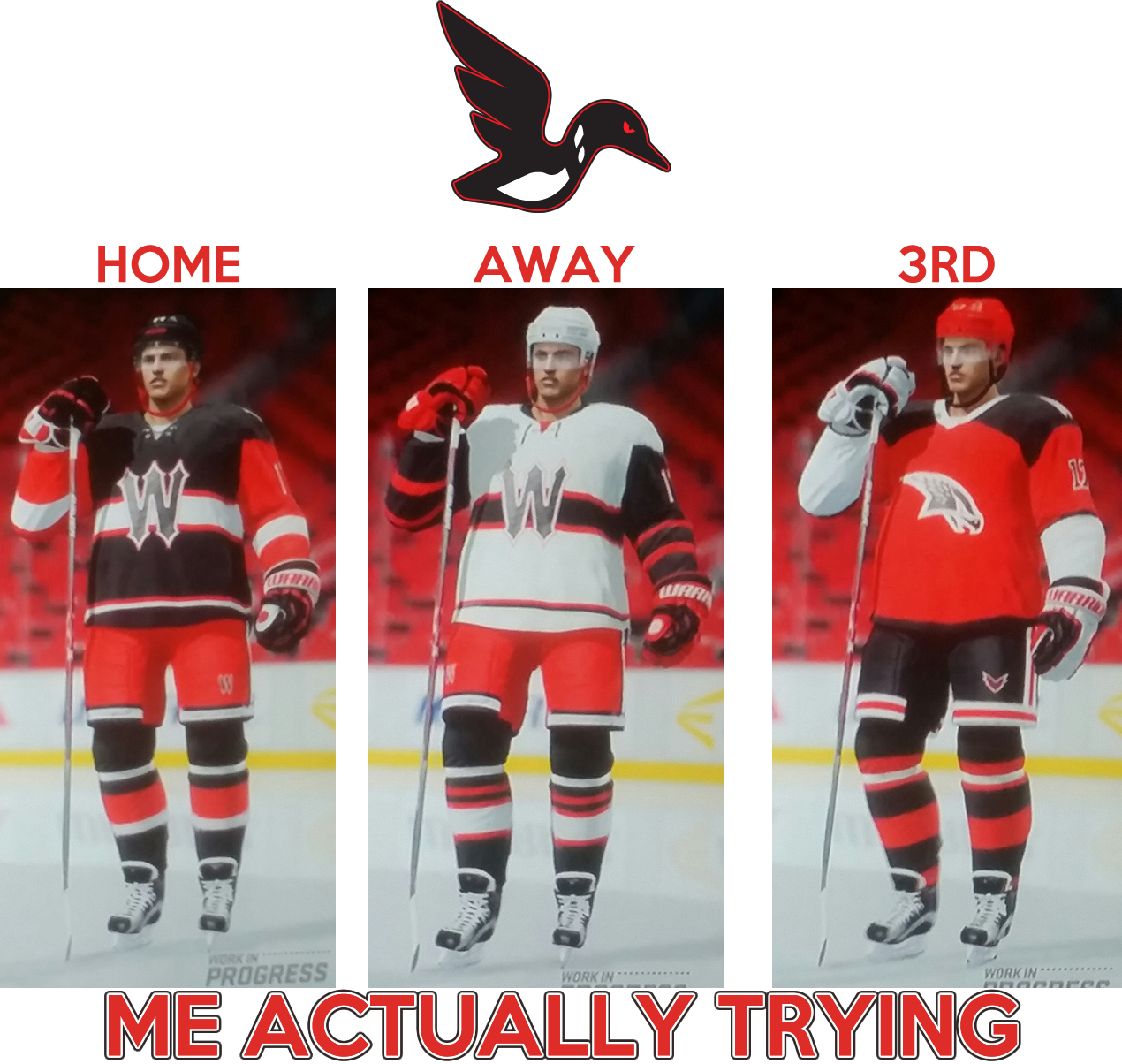 ...And then immediately using the game's engine to make pure evil: 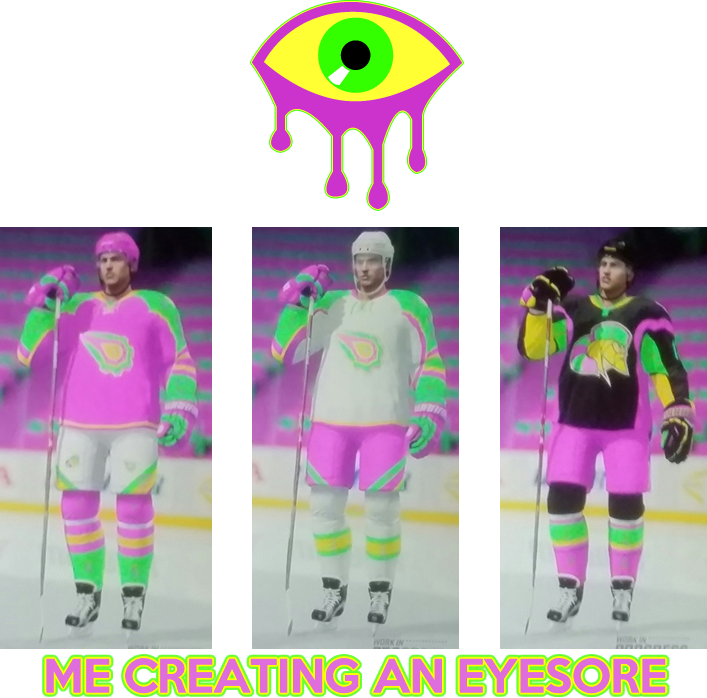 I even finally put a nice little team in Seattle! (that i definitely didn't make at 2am in a state of heavy boredom!) 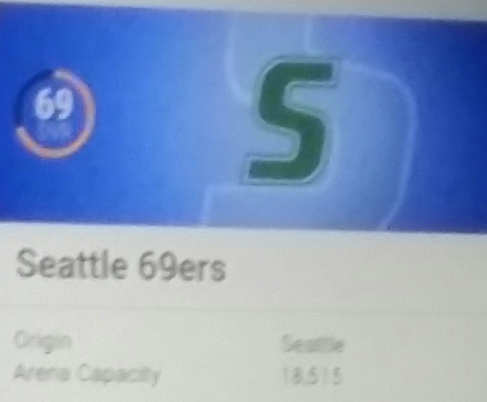 I really do hope the boys over at Polygon get a chance to make something truly heinous with this.

The beta holds back a lot of the stuff that would make looking at the stuff they're championing (like the create a team/arena/player stuff) a lot easier, like a practice mode to see how your players do and a franchise mode to see how your team of all OVR 69 players would do (the answer is horribly). Thankfully, the few bits of single player I was able to get out of this made the game seem like a real improvement over '15 and '16. The options for customization of how you play the game is quite staggering, and allows for a lot of great stuff to happen.

That said, with a lot of the stuff I know I'll use (most of which ISN'T the online portion) locked away from this beta, I cannot quite tell you whether or not it's truly "worth it", as the online stuff does work quite well and I enjoyed it, it did leave me with the idea that re-implementing features in a better, more in-depth way is not exactly innovation, but rather an apology for pulling so much out of the '15 game so that it could work on a new engine.

I would suggest the game, but I'd also suggest watching some youtube footage of the full game once it comes out. Other than that, there's nothing that's mechanically wrong with the ideas at play. I think you could have a lot of fun with it. I know I did. And hey, if I get the game and a capture card? It could be the ideal playground for Breaking Madden On Ice....

But the game has to come out first. It hits stores in Mid-September, so keep an eye out when it's finally time!