A valiant effort, but the Canadians take their plastic trophy and go home.

And that was how the World Cup of Hockey happened.

Europe was dominating, sluggish. Canada brought a less than stellar effort to just get this over with. Even the goaltender wasn't playing at 110%.

And that's when the first Bruin scored.

Zdeno Chara scores from a very skillful shot on the rush with Canada sorta...kinda...somewhat defending and Carey Price kind of being...there, I guess. He put Europe ahead 1-0, and would start off one of the longest times Canada has ever trailed in this tournament.

It was...really weird, to say the least. But not unwelcome to those who were rooting for Team Europe.

No scoring, but it was increasingly clear that Canada really didn't have much in the tank for the first 40 minutes, playing uninspired hockey. Europe, sensing this, basically was allowed to do whatever they wanted, putting tons of pressure on the Great white north and looking like the stronger team.

That's not to say Halak would end up doing nothing this period, because he was called upon to be HUGE.

And he was. Canada would definitely like to have that chance work out for them. Corey Perry and Tavares would especially would like to have another chance at that. But otherwise, Europe came up strong and the score remained 1-0.

I did say all the Bruins in this game scored, right? Well....

The period went on just as previous, only this time Europe was on the defensive, not putting on so many shots, and Canada doing whatever they could to end the WCOH as soon as possible. But as time grew short, it genuinely seemed like Europe was going to bring on a Game 3. And then Anze Kopitar took a penalty.

And then who else to save the day, like so many other days for the Boston Bruins... Like Patrice Bergeron:

By the skin of their teeth, Team Europe was shellshocked. They had done everything right...and were promptly out-talented by two of the best players in the game. Who happen to be linemates. Marchand's goal definitely showed the kind of player he truly is. Yeah sure he gets under your skin, but shorthanded? There is nobody...nobody...you'd rather have to help pull ahead and kill off the penalty.

The game ended, and everyone passed around the vase.

Congratulations to Team Canada, and to our boys Patrice Bergeron: 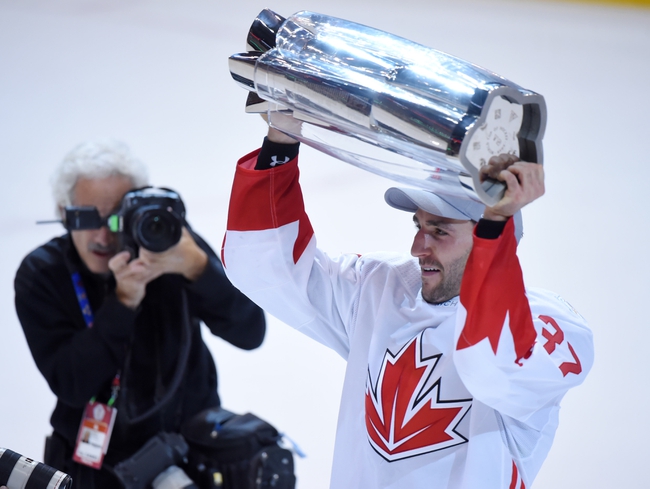 Who were the MVPs of the game, who it actually went to be goddamned. Don't worry, we'll set that record straight soon.

Bruins at the WCOH Final:

Zdeno Chara was also scoring, and taking pretty decent shots. He was just as big a part of getting Europe to the final as any defenseman (especially since most of their defense is kind of broken and old), and had a goal in last night's game.

With that said, the Bruins are most likely going to be a complete unit once these gentlemen return to the Boston area. Will they play? Good question.