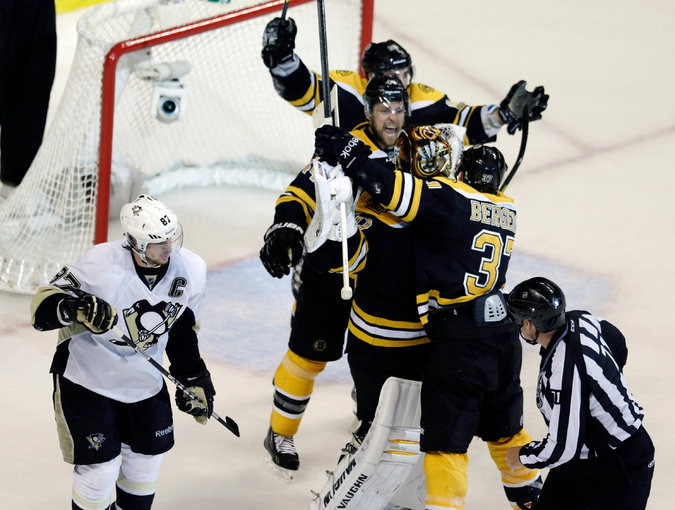 My first memories of hockey aren’t quite fond ones. As a kid that very much liked sleeping in my first recollections of hockey were those of being dragged out of bed at ungodly hours to go to a freezing cold rink. Both my brother and cousin are a few years older than me so I got the pleasure of waking up too early (on a Saturday to boot!) just to watch them flop around on the ice for instructional level hockey. Not the type of dazzling skill that gets the blood pumping.

I endured a season of that, relishing in the fact they we all got donuts and Saturday morning cartoons afterwards but that wasn’t enough for me. I got the idea that if I’m being dragged to rink every week, I should get to play as well. I asked my parents and they said yes, this is what set up my love of hockey. It wasn’t love at first skate for me however. I got strapped up in second hand equipment and learned a few things right off the bat. One, skating is kinda hard! I immediately understood why my brother and cousin flopped so much! Two, breaking in skates hurt. My skates were second hand but it still took me way too long to get used to the feeling of the skate on my foot. Not to mention the blisters! Pro tip: If anyone is considering taking up hockey invest in some moleskin. Three, I am right handed.

Seriously, learn-to-skate and hockey are how I learned my handedness. It is something I never had to think about before that. We were doing some sort of drill and the instructor asked us to go in the direction of our dominant hand. I didn’t know what this meant so I just kept switching off left and right. I thought I was doing okay but the instructor noticed and asked me what I was doing. I said "I don’t know". She threw a puck at me and I caught it with my right hand and she said "you’re right handed so skate right". And thus, I was right handed.

So hockey and I got off on the wrong foot but as I learned to play, and as my blisters went away, I fell in love with the game. I wanted more so I sought hockey where I could find it. Street hockey, knee hockey, the net in my parent’s garage, NHL ’94, and of course the Bruins. I don’t really have a spectacular reason for being a Bruins fan. My family got NESN on our cable package so the vast majority of games I could watch were Bruins games. I grew up in Connecticut so loyalties among my friends were pretty split between the New York and Boston teams. My family was Boston fans for non-hockey sports so when the Whalers up and left supporting the Bruins full time was an easy choice. All in all I think it was a good choice if I do say so myself.

I live in area dominated by college football now and wear my Bruins hat daily. It still breaks my heart just a bit when someone asks me what the logo stands for. Passing on the street I’ll just shout a name but in a bar they get a full thesis on the Bruins and why they are great. I think I’ve made a few converts so far, or maybe just convinced my fellow patrons to root for the same team for bit. Small victories. If anyone asks me a good game to watch I direct them to Game 7 against the Lightning in 2011 or Game 7 against the Leafs in 2013. Whenever I am feeling really down my go to feel good videos are the highlights of the 2013 Bruins-Pens series.

Hockey has always been there for me and I look forward to many more seasons to come. Catch you all in the game day threads next season! Go Bruins!