In November, things looked pretty grim for the B’s play in front of their goaltenders. By 2018? Let’s see how they’ve improved.

After an 11 game point streak by the team, poking the Toronto Maple Leafs in the back of the head and eventually overtaking them for 2nd in the Atlantic Division going into the bye week, things have been looking up for the Bruins since December.

One thing that’s become noticeable is that Both goaltenders and the defenses in front of them have noticeably seen a dramatic upturn in what they’re able to do and how they’ve been playing. As we’ve discussed in an earlier article, this was a bit of an issue coming into the end of the year. Now? It’s like a whole different team got in front of Rask and Khudobin. Just take a look at this image slider and see the difference: 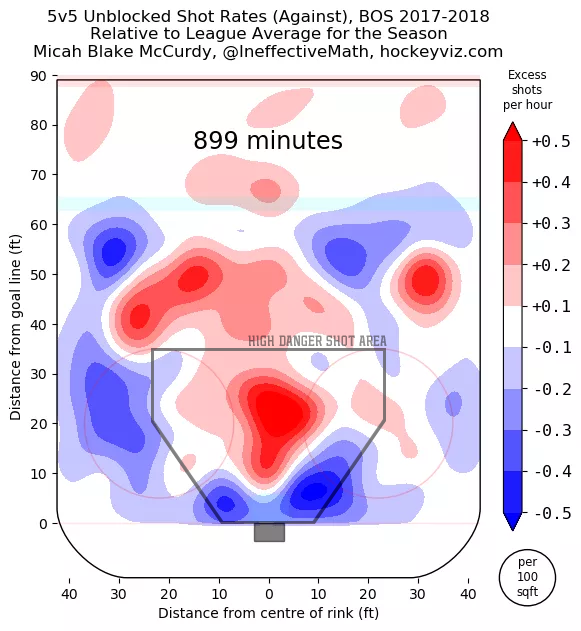 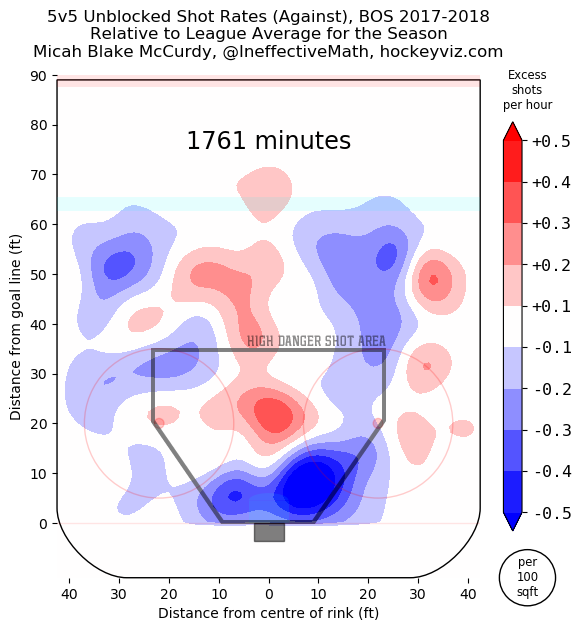 What a difference a month makes, huh? Let’s go a bit deeper and identify some things that seem to have contributed to this positive growth, both from the graph and from the eye-test.

Bruins defenders have finally managed to clean up their biggest problem area: The High Slot.

Boston’s defense has surrendered more shots on the goaltender in the slot/high slot than anywhere else on the ice. It was the case last year, the year before, and the year before that, and back in November, it was the nadir, the very worst point regarding this. Teams could practically drift into the high slot and get a free shot on their keeper. Thankfully, as the month of December went on, Boston finally figured out a way to limit opportunities. This enormous button has become mostly a minor sticking point. It’s still there, but it looks much more managed and controlled than previously.

You might’ve noticed that Boston has begun to let up a lot more shots from the boards. You might also have noticed that with exception, very few if any of these shots tend to go in. Shots from that angle are tough and are almost never goal-worthy unless a truly luminary talent gets it off, the goaltender will usually make that stop. Boston forcing teams to the outside is a great step towards limiting high-danger chances for good in the coming months.

Defense is cleaning out the crease better:

Not everyone who backchecks can be perfect 100% of the time, but it really seems like Tuukka Rask and Anton Khudobin have a much more comfortable time with their defenders and backcheckers right in front of them, especially on the wings right next to their goaltender, where previously they had a miserable time. And a big part of why might be...

That seems like a small point but the Bruins have been so battered over the first part of the season that having a mostly intact roster for most of December has kept major problems to a minimum. But it also helps that...

Gryz has been playing out of his mind:

Look, I don’t want to turn this into a “Matt Grzelcyk hungover and half-awake >>>>>> Adam McQuaid on his best day” kinda article but...the results that might suggest this might be the case are just north of staggering. Gryz’ chance at stardom in the NHL was not just taken, he devoured it and made sure any opportunity of pulling it out of him was squandered. I mean...just look at this.

Truly, Matt Grzelcyk has been a blessing in disguise since he’s been subbed in for Adam McQuaid.

And really, this could not be better timed if they tried; their season starts to get very cramped full of games once the bye week finishes, with no less than three games against their most hated rivals coming in almost a week, a surging Dallas squad coming their way, and an ever-tricky NYI. Hopefully the B’s can keep this up coming out of the Bye, and we can start thinking about that tantalizing part of the season where jockeying for playoff position becomes the main topic of discussion!

Heck, if they can keep this up, any team will have a miserable time trying to keep them down. Get excited.